Look With Your Own Eyes: The Videos of the Chemical Attacks in Syria Show Tampered Scenes 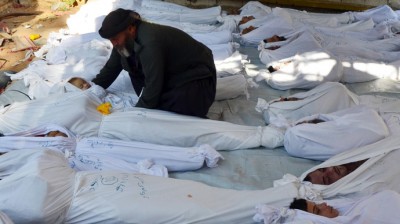 The videos presented by the US Intelligence Community as evidence have staged scenes. Simple observations of the videos can verify this. This is exactly what a recent and modest study did.

A detailed independent  report by Mother Agnes Mariam de la Croix and the International Support Team for Mussalaha in Syria (ISTEAMS) makes some important observations about what happened in the Damascene suburb of East Ghouta on August 21, 2013.

The independent ISTEAMS study contradicts the assertions of the Obama Administration and the entire US Intelligence Community—a gargantuan network of sixteen different intelligence agencies that includes the standalone Central Intelligence Agency (CIA), the US Depart of State’s Bureau of Intelligence and Research (INR), and the Pentagon’s National Security Agency (NSA)—through simple observations of the video material that has been put forward as evidence by the United States.

The ISTEAMS report does not deny that chemical weapons were used or that innocent Syrians have been killed. What the study does is logically point out through its observations that that is empirical evidence that the sample of videos that the US Intelligence Community has analyzed and nominated as authentic footage has been stage-managed.  This is an important finding, because it refutes the assertions of the representatives of the US Intelligence agencies who testified that the videos they authenticated provide evidence that a chemical weapons attack by the Syrian government took place in East Ghouda.

In turn, the Obama Administration has used mainstream media reports from unnamed sources, unnamed social media comments and a series of videos that came out of Syria to make their case for attacking Syria. The videos that the ISTEAMS report looks at are the thirteen videos that the US Intelligence Community selected or nominated as the best video evidence for the Obama Administration to make their case against the Syrian government to the Senate Committee on September 5th, 2013.

The videos that are examined by the study are among the first thirty-five videos uploaded on the internet after the attack in East Ghouta. Almost all of them were uploaded between two to seven hours after the incident and the Local Coordination Committees.

The report starts by asserting that on the basis of personal observations that the most the residents in East Ghouda had been fleeing the suburb since it was was the scene of fighting been the Syrian military and the anti-government militias; as validation, it also refers to the interview of a young Syrian boy by the name of Abdullah who responds that nobody died among his family and neighbours, because most of them were already displaced from East Ghouda.

(1)  Most the footage is of children.

(3)  There is almost a total absence of parents, especially mothers, coming to claim the bodies of the dead children.

(4)  There is virtually an absence of the sound of ambulances in the background of the videos.

(5)  The testimonies being used against the Syrian government include those of individuals claiming to have smelled the chemical that was used whereas sarin is an odorless gas.

(7)  The same footage is used for videos with different scenarios.

(8)  There is different footage that proves that the bodies were being arranged and moved around for display and specifically for filming.

(9)  The same couple appears as parents looking for their children in two different videos and each time they claim a different child as theirs among the corpses.

(10) The same groups that have been involved with posting and disseminating the videos that the US Intelligence Community has selected have also tried to pass pictures of Egyptian civilians killed in Cairo’s Rabaa Al-Adawiya Square as Syrian victims.

(11) Children that are still breathing in Zamalka are just filmed and left alone without medical treatment.

(12) In one video, where it is stated that all the bodies are those of the dead, it can bee seen that some of the corpses are being injected by syringes with an unknown liquid from.

(13) There is no knowledge or evidence that public funerals took place for the large number of victims that surpasses 1,460 people.

(14) In breach of all cultural norms and last rites, no public announcements about the dead or their funerals were made.

(15) There is no more than 500 people in all the videos, even when all the bodies that appear in different videos are added to the count.

(16) In two videos of the same location with a difference of about one hour and forty minutes the entire medical teams changes in the middle of an emergency.

(17) The identities of the dead have largely been left unknown; especially by the anti-government groups archiving and disseminating their pictures; for example we see the body of a little boy in a red shirt that was filmed in Zamalka and then in filmed again among different bodies in Jobar and the inanimate bodies of at least nine of the children that filmed in Kafarbatna also oddly appear at makeshift morgue in Al-Majr a few hours later.

(18) In the footage of one burial only eight people are buried and three of them are not even covered in the “compulsory” ritual shrouds.

As a result these questions emerge:

(2)  Why are the bodies of children being displayed with a virtual absence of adult corpses?

(3)  When adult corpses are seen, why are the unusually segregated?

(5)  If the parents died with their children, why are the bodies of adults virtually absence, especially with the bodies of the children?

(6)  If the parents were not killed, then where are they? Why are they not looking for their children?

(7)  According to the cultural norms and gender scripts of Syrian society, children are almost always found with their mothers. So why is there a relative absence of women and specifically mothers in the US Intelligence Community’s nominated videos?

(8)  How was it possible that all these children died alone?

(9)  There was virtually no outdoor movement in East Ghouda after the attack. How were all the bodies transported to the burial sites without anyone noticing?

(10)  What was being injected into the dead bodies? Do you need to give medication to corpses at a makeshift morgue?

A lot of things do not add up in the footage presented by the US government.

The same little boy in red is in two different locations

Bodies being injected by the woman and man outlined in yellow

The videos nominated by the US Intelligence Community need to be carefully looked at and meticulously studied using the ISTEAM observations that have been found as a basis and then expanded upon. The revelations implicate the entire intelligence apparatus of the United States and discredit it int the same tradition as the intelligence about weapons of mass destruction in Iraq. There are serious flaws in the US Intelligence Community that equate to either a lack of professionalism or/and its outright subordination to Washington’s political agendas that involve false analyses. To think that such a large network with so many resources could overlook the same observations that laypeople have made is embarrassing to say the least.

There is an important Latakia connection that has to be addressed about these videos. There was actually a massacre carried out by the US-supported anti-government forces in that region of Syria on August 4, 2013. It went largely unreported in countries like the US, the UK, Saudi Arabia, Canada, Qatar, and France. Reporting on the massacre of Syrian civilians in Latakia at the hands of the anti-government forces would have been too inconvenient for the US and its allies.

What is also known is that a large amount of women and children were abducted by the anti-government forces, specifically by Jabhat Al-Nusra, as hostages to be used for negotiations and trade with the Syrian government for captured insurgents.  About a hundred and fifty cases are known.

ISTEAMS also mentions that that Syrians from Latakia have come forward claiming that their relatives were on display in the footage that the US Intelligence Community has showcased to justify bombing Syria. The Latakia connection would explain a lot of the questions that arise about the bodies of the unaccompanied children. It also pains a disturbing picture of the bodies of innocent Syrian children being prostituted to spark a foreign attack on Syria by the United States and its allies.

Regardless of any political positions or stances on Syria, everyone who is advocating for war or peace on the basis of these videos has a responsibility to take the observations of the ISTEAMS report to task and verify for themselves the nature of its claims.