Five years on from President Barack Obama scooping a Nobel Peace Prize, and the White House has taken anything but a Zen approach to foreign policy under his watch.

Here are the top 5 not-so-peaceful moves the laureate has made in the past half-decade.

Obama didn’t start the war in Afghanistan, but he certainly took a page from his predecessors playbook in trying to finish it. He recognized his precarious position at prize time.

“But perhaps the most profound issue surrounding my receipt of this prize is the fact that I am the commander-in-chief of a nation in the midst of two wars,” he said after accepting the Nobel Prize in Oslo, Norway, on December 9, 2009.

While he said the war in Iraq was “winding down,” things in Afghanistan were just starting to heat up. A week before accepting the prize, Obama announced he was sending 33,000 more troops to Afghanistan as part of his “surge policy,” intended to beat back the Taliban and train Afghan security forces to take the country into their own hands. The following years would become the deadliest for both US troops and Afghan civilians. Again, it wasn’t Obama’s war. But then came…

Following UN Resolution 1973 on March 17, 2011, which called for “an immediate ceasefire” in Libya and authorized the international community to set up a no-fly zone to protect civilians, Obama, along with his NATO allies, would soon launch military strikes to turn the tide of the 2011 Civil War in the North African state. NATO conducted 9,700 strike sorties and dropped over 7,700 precision bombs. A Human Rights Watch report would go on to detail eight incidents where at least 72 Libyan civilians died as a result of the aerial campaign.

Image: A building used by Gaddafi troops to service vehicles is seen in rubble following a NATO airstrike in the town of Bir al-Ghanam in western Libya, August 8, 2011.(Reuters / Bob Strong)

But the real damage to overthrowing the Gaddafi regime came in the ensuing years, with the country descending into a civil war between Islamist forces and the weak post-revolutionary government. In August, Obama admitted his Libyan policy was a failure, but not because he chose to intervene militarily. Rather, he says the problem was that America and its European partners did not “come in full force” to take Gaddafi out. Although his then-Secretary of State Hillary Clinton seemed to rejoice in his death, wryly noting “We came, we saw, he died.”

Image: A building used by Gaddafi troops to service vehicles is seen in rubble following a NATO airstrike in the town of Bir al-Ghanam in western Libya, August 8, 2011.(Reuters / Bob Strong)

Since the US first started targeting Yemeni militants in 2002, Obama has launched all but one of the 15 airstrikes and 101 drone strikes in the country. According to the web portal New America.net, which has meticulously complied data on the strikes, up to 1,073 people have been killed in the strikes. An estimated 81-87 of those killed were civilians, while the identity of another 31-50 remains unknown. But Yemen was just one prong in Obama’s so-called Drone War, though, as we shall see, it was the site of a game-changing incident.

Unlike in Yemen, drone strikes in Pakistan were in favor long before Obama came to power. Areport conducted by Stanford and New York Universities’ Law schools found that between 2,562 and 3,325 people were killed by drone strikes in Pakistan between June 2004 and mid-September 2012. Anywhere between 474 and 881 of those were civilians, and 176 were children. While Obama didn’t start the Pakistani drone war, he aggressively expanded it.

Image: People gather at the site of a drone strike on the road between Yafe and Radfan districts of the southern Yemeni province of Lahj August 11, 2013.(Reuters / Stringer)

Image: Pakistani Islamic students gather at a destroyed religious seminary belonging to the Haqqani network after US drone strike in the Hangu district of Khyber Pakhtunkhwa province on November 21, 2013.(AFP Photo / SB Shah)

Following widespread opposition at home and abroad, in May 2013, Obama promised a new era of transparency to protect civilians, saying control of the program would be transferred from the CIA to the Pentagon. But…

In February 2013, the Obama administration’s internal legal justification for assassinating US citizens abroad came to light for the first time. According to the Justice Department document, the White House has the legal authority to kill Americans who are “senior operational leaders,” of Al-Qaeda or “an associated force” even if they are not actively engaged in any active plot to attack the US.

In September 2011, a US drone strike in Yemen killed two American citizens: Anwar al-Awlaki and Samir Khan. The following month, a drone strike killed al-Awlaki’s 16-year-old son, who was born in Colorado. 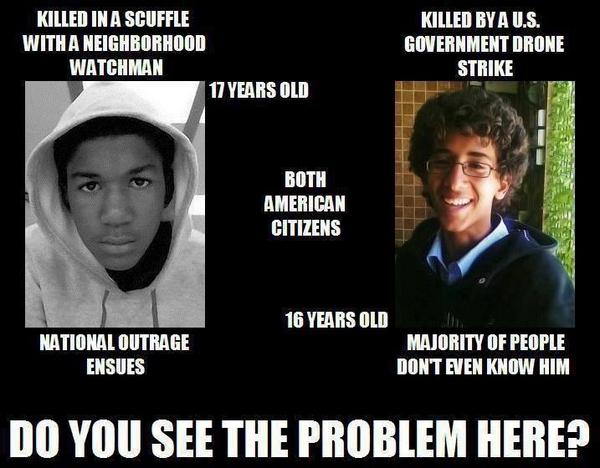 The concept of the US president exercising the right to kill US citizens without the benefit of a trial has resonated throughout American culture.

In the comic-book-inspired film ‘Captain America: The Winter Soldier’, the issue of targeted killings and “kill lists” features prominently in the plot.

Image: People, affected by what activists say is nerve gas, are treated at a hospital in the Duma neighbourhood of Damascus August 21, 2013. (Reuters)

After the UK balked at airstrikes, Moscow and Washington took the diplomatic route, resulting in a historic deal that has seen Damascus abandon its chemical weapons stockpiles.

But US-led airstrikes on Syria were only postponed. On August 8, 2014, the United States started bombing so-called Islamic State (IS) militants in Iraq to protect embattled Kurds. The following month, the US would launch airstrikes against IS militants in Syria as well. Of all the US military interventions in recent years, the battle against the IS has been met with widespread approval. Still, Syria was the seventh country Obama has bombed in six years.

Image: An explosion following an air-strike is seen in the Syrian town of Kobani from near the Mursitpinar border crossing on the Turkish-Syrian border in the southeastern town of Suruc, in Sanliurfa province, October 29, 2014.(Reuters / Yannis Behrakis)

Quite a feat for a Nobel Peace Prize-winner.