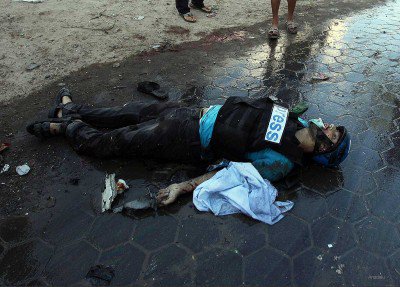 The Palestinian Center for Development and Media Freedoms (MADA) held a meeting in Gaza city yesterday (26 January) to present its special report and short documentary film on the Israeli violations against journalists and media outlets during the latest attack on the Gaza Strip in summer 2014. The journalists who participated in the meeting stressed on the need to hold the Israeli leaders accountable for their crimes against journalists and media outlets in Palestine, especially in the Gaza Strip.

MADA’s coordinator in Gaza Dr Ahmad Hammad thanked the International Media Support (IMS) organization in Denmark for funding the report, the film and the event.

Hammad pointed out that the report, entitled “The Media in Gaza: Caught in the Crossfire” (available in both Arabic and English), monitors the attacks committed by the Israeli occupation forces on journalists and media freedoms in Gaza during the latest attack. It also compares media violations committed during the 2014 attack with the previous ones, in the years 2008-2009 and 2012.

MADA’s lawyer in Gaza Karem Nashwan said that keeping silent about the Israeli crimes justifies their continuation, and that all the human rights organizations should stand together to hold Israel accountable and to trial its leaders for violating one of the most important right: freedom of expression.