February 27, 2015 “ICH” – AIPAC (The American Israel Public Affairs Committee) and affiliated organizations have long been bending politicians’ ears and filling their pockets, supporting the brutal occupation of Palestine and trying to push the US into war with Iran. Racism is the force that both helped to create and now helps to sustain and justify the brutal occupation of Palestine and the accompanying police state. Now is the time to connect the dots and challenge state-sponsored violence and racist police at home and abroad. Whether your motto is #FreePalestine or #BlackLivesMatter, we must unify our movements to call for an end to global militarism and the plague of racism. February 28th – March 3rd, when war criminal Israeli Prime Minister Netanyahu will be in DC to address AIPAC and a joint session of Congress, join activists from around the country to #ShutDownAIPAC!

(For information on civil disobedience actions or to become an organizational endorser, please contact anna@codepink.org) 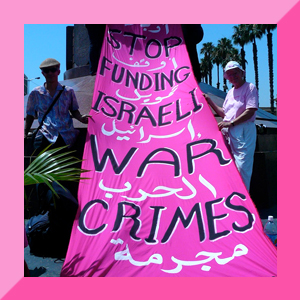 Converge on the Washington Convention Center with creative visuals and speakers, including founder of Boycott from Within Ronnie Barkan; Organizers from Ferguson Tef Poe and Tara Thompson; founder of the Dream Defenders Ahmad Abuznaid; and Friends of Sabeel representative and Jewish Voice for Peace organizer Ariel Gold.

Join Miko Peled and Philip Giraldi  to discuss AIPAC’s political power and how best to counter it. Facebook event RSVP.

Join activists to protest Israel’s crimes and call out visiting Prime Minister Netanyahu for his government’s policies of occupation, apartheid, and warmongering

Check out #BlackLivesMatter activists standing in solidarity in Palestine and join us in calling for justice February 28th – March 3rd.  #FreePalestine #EndApartheid