Scotland and the Trident Question: Breaking up the United Kingdom? 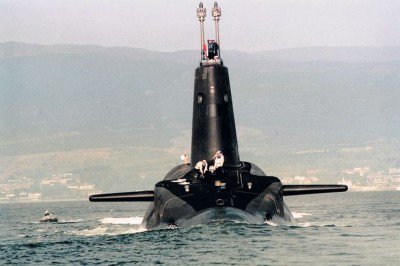 “As you resume or take office, you will recognise one of the heaviest and most important burdens on your desk will be your responsibility for Britain’s independent nuclear deterrent.  That deterrent exists, as you will know, not as a military weapon but as a political one whose very purpose is for it never to be used in anger.  It is there to deter aggression against this country and our allies and to counter any nuclear blackmail which would threaten Britain’s essential interests or survival.”

So, with just days to go before the UK general election, starts the letter in the Times from 20 cross-party defence and security chiefs to whoever ‘wins’ a place in Number 10 Downing Street.  They want the decision to replace Trident to be taken as soon as possible.  And this plea comes while other British representatives are in New York, attending the 5-yearly nuclear Non-Proliferation Treaty (NPT) Review Conference.  Here is what Baroness Anelay said:

“The United Kingdom remains committed to the Non Proliferation Treaty.  It has played an unparalleled role, keeping the world safe and curtailing the nuclear arms race.  It is at the centre of international efforts to stop the spread of nuclear weapons, to create a nuclear weapon free world, and to enable access to the peaceful use of nuclear energy.”

Now for some nifty arithmetic.  After claiming that Britain is committed to ‘step-by-step’ disarmament, she boasts that:

We don’t need to worry about the number of missiles – they and the submarines are simply the delivery system for the nuclear warheads, each one many times more powerful than the atom bombs dropped on Hiroshima and Nagasaki.  If used, any single warhead would produce environmental devastation, an unsolvable humanitarian disaster and the fall-out would circle the world.

But has the good Baroness not noticed that there are four submarines carrying these warheads?  In my book 4 times 40 equals 160, not 120.  As successive governments have not disclosed the size of our stockpile, we really have no way of knowing what Britain has, but we appear to be looking at a future store of 20 spare warheads stuffed in a cupboard somewhere.  The Non-Proliferation Treaty was signed way back in June 1968.  ‘Step by step’ looks more like millimetre by millimetre.

Why should the Trident question have surfaced at this point in the campaigning by the ‘major’ political parties, all jostling to take pride of place in the UK general election on May 7th?  First, while the NPT Review is quietly proceeding and the UK is busy election navel-gazing, a movement to achieve an international treaty banning nuclear weapons, based on the grave humanitarian issues posed by such weapons, is edging much closer, to the great unease of those states with nuclear arms.

This initiative was set in motion by ordinary people and taken up by countries across the world.  And the process is based on the one that resulted in the Convention on Cluster Munitions, which bans the manufacture, use and storage of these nasty weapons.  Unless of course, you are the USA (not a signatory) which negotiated a cosy arrangement with the UK (which is a signatory) to store their cluster munitions in the UK.  As of 25 March 2015, a total of 116 states have joined the Convention, as 91 States parties and 25 Signatories.

The hoped for ban on nuclear weapons is moving, by international standards, very quickly.  The first conference (not attended by the P5 of USA, UK, France, Russia and China) took place in Norway in March 2013.  11 months later (February 2014) there was a second conference in Mexico.  The UK sent no representatives because they “could not control the conversation.”  The third was in Vienna in December 2014, a mere 10 months later.  Two international conferences in one year – is this a record?  The UK did attend this conference, complete with a weasel-word statement on why this process was getting in the way of the wonderful NPT process, from which you would, they hoped, conclude that the NPT was advancing in leaps and bounds rather than the static shuffle.

The Austrian Foreign Minister also delivered a statement to the NPT Review delegates – on behalf of the 159 nations that were pressing for a ban.  According to ICAN, they ran out of time to sign up number 160.  But this looks like being unstoppable; the P5 can take part but they can’t block or alter the process.  A ban will come – scary for self-important political leaders that rely on nuclear weapons to boost their perceived ‘world standing’.

Secondly, the authors of the letter from the defence and security chiefs are also speaking for NATO.  NATO is desperate to hang on to its ‘position’ in the world, hence all the anti-Russian propaganda, the crisis in the Ukraine and the rest.  But without an enemy NATO’s continued existence has no justification; thus it has to create an enemy; or recreate the one it lost when the Soviet Union dissolved.  And such big enemies need big weapons, nuclear weapons.  We should not forget that NATO has, as part of its policy, a nuclear ‘first strike use’.  NATO is living in the past.  The real threat now to governments and business worldwide comes from cyber hacking, and you can’t stop that by waving your willy – sorry – nuclear weapon.

It is also worth remembering that the Trident replacement programme is currently estimated to cost £100 billion – at a time when much of Britain is suffering from the government’s ‘austerity’ cuts.  When the Tories with their coalition partners the LibDems came into power, they cut ruthlessly into the budgets of various government departments.  The department that had the least taken from it was the Ministry of Defence.  Yet the pro-Trident parties – and Tories, Labour and the LibDems all currently back replacing Trident – want to saddle the country with this huge debt when our hospitals, schools and welfare budgets are desperately in need of more funds.

And thirdly, there is Scotland.  This is the nub and the heart of the hysterical statements frothing out of the mouths of those who hope to be our leaders post-May 7th.  Scotland, home of Faslane, where the nuclear submarines are based; Scotland, home of the Scottish National Party, the dreaded SNP that wants Scotland to be independent.

And Scotland, home of the even more frightening Nicola Sturgeon, First Minister of the Scottish Parliament, whom Westminster hates and who, day by day gains more respect from an increasing number of English folk, who’d rather like her as their First Minister.  Polls show that she is now themost popular politician in the UK

So much nastiness and bile has been directed at her and the SNP that there is now no retreating.  The Tory, Labour and LibDem parties are all screaming ‘we won’t do a deal with her!’  ‘Lines’ are being ‘drawn in the sand’.  They’ll deal with the devil rather than the SNP.  But somebody will have to.  With each filthy insult flung across the border at Scotland, another Scot or two, or ten, decides to vote for the SNP on May 7th.  And the main accusation against Sturgeon and the SNP (despite what Sturgeon has repeatedly said) is that they will destroy the United Kingdom, because they are still planning to become independent.  Well, would you blame them?

Polls are predicting that, whatever happens south of the border, the SNP will sweep the board in Scotland, and a goodly percentage of the MPs in Westminster will be SNP.  It is very possible they could hold the balance of power.  I should explain here to international readers that Scotland has its own parliament and parliamentary members, of which Nicola Sturgeon is the First Minister.  But Scotland also, for the time being at least, elects and sends national MPs to Westminster.

Here’s the rub: the crude and foul-mouthed slurs coming from the English side of the border are pushing the Scots ever closer to seizing independence.  Quite frankly, many of us south of the border are shamed, mortified and appalled at what is being done in our name.  Many also feel that Westminster politicians, led if it can be called that, by David Cameron (who reneged on the overblown promises he made to Scotland to persuade them to vote for staying in the Union) are almost deliberately setting out to break up the Union they profess to love.

And if the Union is broken, what will they do?  Because an independent Scotland will, as promised, get rid of Trident.  Westminster would have to find somewhere in English waters to house the submarines and their missiles.  England will resist.  Is the aim of this push to get the decision on replacing Trident taken ASAP to get it so set in stone that, whatever happens, Scotland can’t rid itself of this unwanted lodger?  Will Faslane become another Gibraltar?  Just a thought.

And now, some good news for all of those British people who have despaired over the conduct the Westminster-oriented politicians during this campaign, and feared for what this nation could become.  At least some of the English are beginning to engage in real and lively political conversation, mainly because they are so disgusted by the current political system, the divisions it has created between the rich and the poor, and the inability of various parties to truly work together.

One such conversation happened in my local pub between two of the candidates standing in the election and a gathering of local residents.  The questions asked, the issues raised and the solutions discussed by all involved was good honest politics.  Afterwards, talking to someone I had once thought would possibly vote Conservative, he said:

“No Westminster?” I asked.

“Definitely no Westminster!.  And then we can become a federation of nations, a united federation.”

Because of what is happening in Scotland, a lot of England is waking up and looking a bright new future, one that doesn’t include the same old politics, but does include united cooperation with our neighbours.