African American and Palestine Liberation: A Response to the Mainstream Media and Their Imperialist Masters 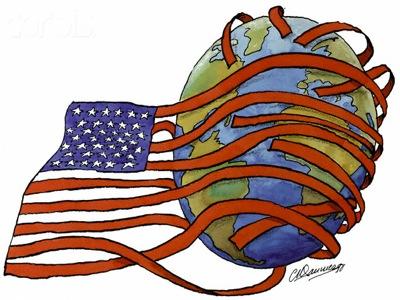 A series of opinion articles have been published recently in Newsweek contradictorily condemning and praising the Obama administration’s efforts to reassure the State of Israel that United States imperialism is on their side all the way in suppressing and eliminating the Palestinian people.

The authors go as far as to caution Obama against drawing any comparison between the plight of African Americans and the Palestinian struggle for national liberation. Such an editorial slant reveals that the shapers of U.S. foreign policy in the Middle East are concerned about growing support for Palestine in the U.S., especially among African Americans and their allies.

Israeli foreign policy is a by-product of the overall imperialist designs of Washington and Wall Street in the region. Not only is it necessary to maintain the settler-colonial state in Palestine as bulwark of the Pentagon and NATO military strategy but it is also important to continue the domination of Egypt and other states in North Africa and the Middle East.

Successive U.S. administrations have waged wars against the people of Iraq, Libya, Syria, Sudan and Libya. Consequently, any notion of a lessening of support for Israel flies in the face of the continued multi-billion dollar subsidy to Tel Aviv annually along with the transferal of arms and other military technology which is tested on the Palestinian people in Gaza and the other occupied territories.

Efforts are underway to make the recent national elections in Israel as a representation of the uncertainty of the domination by the conservative forces centered-around Prime Minister Benyamin Netanyahu over the political future of the regime. Nonetheless, the uneasiness of the administration of President Barack Obama about Democratic and U.S. policy in general towards Israel is partly to blame for the appearance of differences of approach to the Palestinian Authority and the Islamic Republic of Iran.

According to a Newsweek magazine article written by Marc Shulman under the title “Tel Aviv Diary”, “The one person who seems unwilling to accept the results of the election here appears to be the current occupant of the White House and other members of his administration. President Barack Obama has been exceptionally harsh in his criticism, which is starting to create a backlash among Israelis.”  (May 24)

The question is backlash against what? Obama has continued the same imperialist agenda throughout the region and is providing firm support to the current war against Yemen waged by Saudi Arabia and the Gulf Cooperation Council (GCC) alliance.

Public opinion in the U.S. is increasingly in favor of the Palestinian struggle for self-determination and statehood. Demonstrations during the summer of 2014 against the Israeli Defense Forces (IDF) massive bombing and ground incursion into Gaza were the largest protests against these repeated genocidal acts in history.

Both the African American and Palestinian peoples suffer from national oppression and efforts aimed at genocidal removal by the racist governmental structures operating in both states.

During 2014 when the U.S. witnessed the largest Palestine solidarity demonstrations ever in response to the bombing and ground invasion of Gaza, African American youth played a prominent role in these actions. Both Palestinians and African Americans spoke out clearly of their common struggle from Gaza and the West Bank to Ferguson and Baltimore.

In Detroit the demonstrations during “Operation Protective Edge” where the IDF pounded Gaza as well as escalated repressive measures against the Palestinians living in the West Bank, signs appeared demanding water for both the people of Gaza and Detroit. Weekly protests at the Detroit Water Sewerage Department (DWSD) known as “Freedom Fridays” during the summer of 2014 often joined rallies and marches taking place outside the Federal Court House in solidarity with Palestine. At this same time the Detroit bankruptcy proceedings were still being litigated at the federal court. This was the most significant municipal bankruptcy in U.S. history.

Expressing concern about the more vocal opinion in support of Palestine among African Americans and its potential impact on electoral politics in the U.S. with a national election looming during 2016, the same author Marc Shulman wrote in the June 3 issue of News week that “Of course, if Obama wants to have any chance of swaying Israeli opinion, he needs to decouple his view of the ‘plight’ of the Palestinians from that of African-Americans in the United States. It is true that both groups have been, and are, discriminated against, and certainly both groups have suffered. However, the historic analogy between the two is very weak. African-Americans were taken as captives from their homes and kept as slaves until a civil war freed them. Many African-Americans endured a century or more of discrimination, even after the Civil War ended.”

In a failed attempt to draw such a distinction between the history and conditions of Africans and Palestinians, the same author says “The Israeli-Palestinian conflict is a traditional nationalistic conflict, with two peoples claiming the same land. This conflict would have ended long ago if Palestinians had agreed to any of the previously offered compromise solutions.”

Such an argument is reminiscent of the racist newspaper editorials which blame Michael Brown, Eric Garner, Tamir Rice, Freddie Gray and others for their own deaths. Not to mention those reports which describe African Americans involved in militant demonstrations against police terrorism and judicial impunity as “thugs” for engaging in the destruction of property and self-defense tactics against law-enforcement agencies.

These victims of settler-colonialism and institutional racism are somehow expected to acquiesce to oppression in favor to the continuation and worsening of their social plight.

There is a firm political basis for the analogy between Apartheid, Jim Crow and Zionism in its present and historic forms. Israel has inflicted racist treatment on the Palestinians but also those from Africa who have migrated to the country.

In recent years attacks against African immigrants from Sudan, Eritrea and Ethiopia have gotten international media attention. Netanyahu recently met with an African IDF soldier who was attacked by police for racist reasons. Yet what Netanyahu and his cohorts do not mention is that his political coalition has deliberately exploited racist attitudes and social policies towards  Palestinians and Africans in order to maintain control over a settler state that is losing support even within the U.S., and of course throughout the broader international community.

Both the U.S. and Israel are facing growing opposition internally and globally. These racist and national oppressive states can only rely on military might and the economic dominance of the imperialism to provide any semblance of a secured future.

Greater solidarity between Palestine and African Americans will be an important factor in the burgeoning struggle against imperialism. Whether the White House, Congress and Wall Street recognizes or accepts this shifting situation it is evitable and will change the course of history in support of the oppressed and working people of the world.