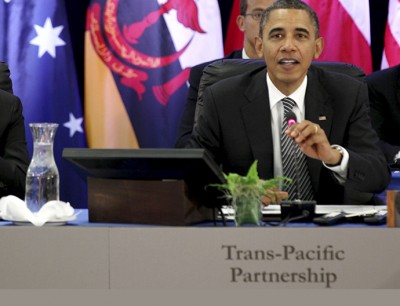 Here is from the June 3rd article at the pro-trade-deals Americas Society & Council of the Americas, “Summary: The Trans-Pacific Partnership – What’s at Stake for the Western Hemisphere?” in which the Democratic congressman, Gregory Meeks, a Co-Chair of the Friends of the Trans-Pacific Partnership Caucus, states the core of the Administration’s case on its proposed trade-deals. The article reports:

According to Congressman Meeks, ‘TPP is a force for positive change across the board for all countries, whether or not they belong to TPP,’ although this transformation will require rigorous action. Countries in Central and South America understand that economic reforms and harmonized trade rules are only one side of the coin. On the reverse side, they are committed to addressing socio-political demands, inequality issues, violence, and the informal sector in the economy.

He’s referring there to the uniform standardization that these deals would impose upon all participating countries regarding regulations of food-safety, product-safety, drug-safety, environmental standards, workers’ rights, protections against the defrauding of investors, etc. He is saying that this international uniformity will bring “positive change across the board for all countries.”

So: let us assume, for the purpose of argument, that, for the most part, the net average result will indeed be to raise standards. This is what he is implying (even though it’s false). But there is a deeper problem than whether environmental and other standards within various nations are set higher; and it is that they are, in effect, to be set in stone by these agreements.

Whereas to change a law or regulation requires only intra-national, or inside-the-nation, process, changing a treaty-provision requires a vastly more difficult international process, which demands the unanimous consent of all member-nations of the given treaty or international agreement.

If subsequent scientific research indicates that a given global-warming matter requires a higher standard than was formerly thought, or that a given product-safety or food-safety standard was actually dangerously low and must be raised, then, that’s just too bad, because there won’t be any realistic way in which the given standard, in any participating country, will be able to be raised. The international corporations that have lobbied so successfully for Obama’s ‘trade’ deals to get them as far as they already have, will easily be able to block at least one of the participating countries from going along with a treaty-change to enable increasing the then-established set-in-stone international standard.

So: what’s really at issue here is a transfer from national democratic sovereignty to, instead, international-corporate sovereignty, in which international corporations will have locked-in an international dictatorial control over a large portion of what it is that national governments do, and necessarily must do, in order to serve the public good.

The whole thing is a corrupt con-job.

Barack Obama wants to bring the world into international fascist control more than has ever yet existed on this planet. If he succeeds, he will thus be the most harmful political leader in world history. His deals must be stopped. They are horrendous.