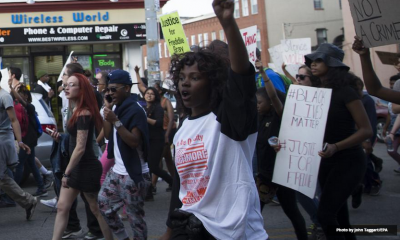 Jason Leopold  of Vice (6/24/15) has released devastating documents about the Department of Homeland Security and the FBI’s analysis of a “threat” released by Baltimore police to media on April 27. The police had claimed that local “gangs” had gotten together and conspired to “take out cops”; this “credible threat,” used to justify an aggressive crackdown on protests against police violence, was reported on at the time from everyone from local news to national outlets like CBS News (4/27/15):

As the funeral for Freddie Gray, the man who suffered a fatal spinal injury in police custody, was held Monday, the Baltimore Police Department announced they had received information about a “credible threat” against the lives of its officers.

In a press release, the department states that “members of various gangs including the Black Guerilla Family, Bloods, and Crips have entered into a partnership to ‘take out’ law enforcement officers.” The statement advises local agencies to “take appropriate precautions to ensure the safety of their officers.”

It turns out, however, that an FBI review the next day would determine this threat was entirely without merit. As Vice reported:

But an email sent that day by a DHS employee who works at the Maryland Fusion Center to DHS intelligence officer Earl Rose IV called into question the integrity of the Baltimore Police Department’s [BPD] threat information. The fusion center employee said it was “curious that the alert came out from BPD media relations section instead of BPD Intelligence Unit, which is where we typically receive this kind of info…. The tensions have heightened here in Baltimore over the last 72 hours so this alert cannot be considered without that context.”

Hours later, in the same email chain, another DHS employee said, “FBI Baltimore has interviewed the source of this information and has determined this threat to be non-credible,” apparently marking this the first time that it was debunked since the threat first surfaced.

It’s a time-tested tactic: The police call up the press, tell them how worried they are about all the threats they’ve received, and are never asked to show any evidence said threats actually exist. The press repeats these claims, and the fundamental propaganda meme—that protestors are threatening the police—is disseminated unquestioned.

The “gang conspiracy” threat was not without consequence. This threat—in concert with a dual hyping of a “purge” (also a story full of baseless police claims) on April 27 was critical for expediting the arrival of the Maryland National Guard, the Department of Homeland Security and the FBI. In effect, the fever pitch of panic resulting from the anonymous “gang” threat and “the purge” narrative is what ultimately led to curfews and a severe dampening of the largely lawful and peaceful protests in the wake of Freddie Gray’s funeral. The media uncritically repeated these stories—with their varying degrees of truth—and gave the Baltimore Police the benefit of the doubt throughout the Baltimore Uprising, even though much of what they were communicating clearly fit the pattern of public relations.

Even something as routine as a Twitter feed was needlessly Orwellian. As The Nation (4/30/15) reported the same week:

Many of the [BPD’s] tweets are written in language that does more to evoke fear and lay blame than to inform. “In an act of violence and destruction—a group of criminals have set another car on fire at North Avenue and Fulton Ave,” read one tweet. Another: “Groups of violent criminals are continuing to throw rocks, bricks, and other items at police officers.” The word “criminals” appears over and over again, so often that someone reading the feed could be forgiven for thinking that Baltimore really did turn into a scene from The Purge.

One tweet in particular became infamous among locals for its Robocop-like tone. The BPD tweeted out, “There is a group of juveniles in the area of Mondawmin Mall. Expect traffic delays in the area.” As one local resident quickly fired back:

This fact—that there are always young kids at Mondawmin (it’s a major transportation hub, and the only way thousands of kids can get home)—is erased entirely from the equation. The use of the term “juveniles” is meant to prejudice the reader and criminalize otherwise legal and peaceful assembly. From the beginning of the Baltimore Uprising, in other words, it’s been evident the Baltimore Police Department was far more interested in manipulating the press and hyping the threat than they were protecting First Amendment activity and people’s property.

The excellent piece of muckraking journalism by Vice and Jason Leopold makes this fact all the more clear.

Adam Johnson is a freelance journalist; formerly he was a founder of the hardware startup Brightbox. You can follow him on Twitter at@adamjohnsonnyc.