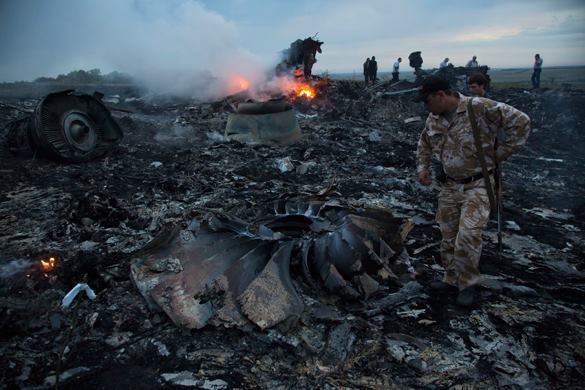 Western media sources were quick to point the finger at “Russian-backed rebels” operating in Eastern Ukraine, operating a “Russian missile system” to down the Malaysian Airlines flight MH 17 in July 2014. Even the name of Russia’s President was invoked…all without a shred of evidence one year on. Here are some questions to be answered.

2. OCSE monitor Michael Bociurkiw in an interview shortly after the incident on July 17 that there are two or three pieces of fuselage which show indications of heavy machine-gun fire and no evidence of missile damage. How to explain this?

4. What about the eye-witness reports of two Ukrainian Air Force fighter jets trailing the plane at the time of the incident?

5. How to explain the circular holes bend inwards at impact, when such holes are made by bullets from machine-gun fire? Shrapnel from a BUK missile system would have caused tears in the fuselage more of a triangular shape and would not have concentrated on and targeted the cockpit specifically. Furthermore, fuselage sections on another part of the aircraft have outward-bent impact marks, showing that the MH-17 was being fired at from two different directions.

6. The caliber of the round bullet holes is from a 30-mm. cannon. If the aircraft was downed by a surface-to-air missile, then how could this produce bullet holes from a machine-gun?

7. The fuselage has other marks besides those of machine-gin fire. Was the aircraft hit by an air-to-air missile as well as machine-gun fire from two different sides from the two aircraft said to be trailing it at the time of impact?

8. Why have fragments of information disclaiming the western theory that pro-Russian or Russian-backed rebels were responsible disappeared from the Internet? Why have Facebook accounts showing such evidence been closed down? Why have blog sites carrying evidence disclaiming the western theory been hacked? Why do stories such as these attract an army of Internet trolls making ad hominem attacks against the author, sending threatening emails to her/his email account and vehemently shrieking abuse and lies without discussing any of the points in question?

9. If a guided missile launched by a BUK-M1 Surface to Air Missile battery leaves a comet-like plume of smoke behind it, and given that no such plume was seen at the time of impact against MH 17, during daylight, would this not point towards the fact that the object responsible for the incident was not, in fact, a BUK missile system?

Turn on your microphones, copy and paste this link into a fresh browser window and watch this:

10. If the impact holes on the aircraft show impact from below and sideways, then how does this implicate a BUK missile system, which strikes the target from above?

11. Looking at the video, how can a complex system costing millions and involving different control vehicles be operated by “rebels”?

12. How to explain that eye witnesses saw aircraft trailing MH17, and then shots, without any missile trail, just before the aircraft exploded?

13. Is there any credence in the theory that President Putin was believed to be flying over the same route at the time? Malaysia Airlines confirms  “A flight from a different carrier was on the same route at the time of the MH17 incident”. Sources who have asked not to be named have claimed that the Russian President’s aircraft has very similar contours and coloring to MH17 and that both aircraft intersected at the same point and altitude at a similar time. It was 200 miles behind MH 17. In the event it did not fly over Ukraine, but the trajectory could have fooled those who wanted to murder President Putin?

14. And how to make sense of this? Kiev’s wrath against anti-Kiev commander Bes was well known. Bes operated precisely in the area of the downed jetliner. Then there was the video tape of a supposed conversation between him and subordinates, uploaded five hours after the crash but placing the time of the crash 35 minutes before it actually took place. The log of the video shows it was made on July 16, so one day before the incident took place? Fabricated false flag “evidence”?

15. The video of a recorded conversation between a Ukrainian military pilot and command flying in the area at the same time regarding a downed aircraft has since disappeared from the Net. Why?

Anti-Fascist forces did not have equipment or know-how

16. The BUK M-1 is a sophisticated piece of weaponry that can only be operated by a team of experts, involving training for months. Such personnel know the difference between a civilian and a military aircraft. Coupled with this, the anti-Kiev freedom fighters in the area possess missile systems that do not operate over 10,000 feet. The MH-17 was flying at 33,000 feet.

17. Why was the aircraft flying over a war zone, where ten aircraft had been downed recently?

18. Why does the downed aircraft show cladding damage characteristic with pin and shrapnel warheads (air-to-air systems), much more characteristic of R-27 TOPOR or R-73 missiles used on the Ukraine military MIG-29 and SU-27 aircraft?

19. One year on, where is the official report? Does it really take that long to doctor the evidence?

20. Given the recent history of geopolitical events and given the following, would anyone put any of the questions raised above beyond NATO in general and the FUKUS Axis (France-UK-US) in particular?

*Timothy Bancroft-Hinchey has worked as a correspondent, journalist, deputy editor, editor, chief editor, director, project manager, executive director, partner and owner of printed and online daily, weekly, monthly and yearly publications, TV stations and media groups printed, aired and distributed in Angola, Brazil, Cape Verde, East Timor, Guinea-Bissau, Portugal, Mozambique and São Tomé and Principe Isles; the Russian Foreign Ministry publication Dialog and the Cuban Foreign Ministry Official Publications. He has spent the last two decades in humanitarian projects, connecting communities, working to document and catalog disappearing languages, cultures, traditions, working to network with the LGBT communities helping to set up shelters for abused or frightened victims and as Media Partner with UN Women, working to foster the UN Women project to fight against gender violence and to strive for an end to sexism, racism and homophobia. He is also a Media Partner of Humane Society International, fighting for animal rights.