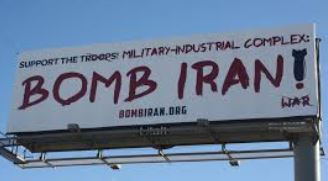 July 31, 2015 “Information Clearing House” – “RT” –  Even before the upcoming August recess on Capitol Hill, the dogs of war, unleashed by remote control from Tel Aviv, predictably are trying to tear the Iran-P5+1 nuclear deal to shreds from all sides.
It does not matter that the National Iranian American Council – which happens to be widely respected in Washington itself – has forcefully come out in defense of the deal.  It does not matter that the Obama administration can count on the combined efforts of the so-called E3 ambassadors (Britain, France and Germany) in Washington, who are exhausting themselves to explain the obvious: This is an international treaty, already approved by the United Nations, and not a parochial squabble decided in Idaho. On the other hand, it does matter that the Obama administration has not been forceful enough to defend its strategy as well as the result of such a long and treacherous negotiation.So there are now two narratives shaping the battle ahead in Washington.1) Iran is a rogue nation, an existential threat to Israel, and it cannot be trusted. It will breach the deal, so the deal must be rejected to the benefit of… perpetual sanctions, or war.2) Iran is a rogue nation, it cannot be trusted, but we have all the verification mechanisms in place and as soon as Iran “cheats” – as it will – we launch immediate “snap back” sanctions.No wonder, under these circumstances, Washington simply cannot be trusted by Tehran.

Now for the other side of the narrative.On July 18, four days after the deal was signed in Vienna, Supreme Leader Ayatollah Khamenei – foreseeing which way the D.C. wind would be blowing – went straight to the point; his intervention delineated the parameters according to which Iran would work to actively debunk a massive propaganda machine that continues to demonize the Islamic Republic even as it touts a victory for Western diplomacy.The victory in Vienna was in fact for diplomacy tout court – East and West working together.

Even before his speech, Khamenei had already touched upon the key point when he sent a short message to President Hassan Rouhani a day after the deal.

This is the money quote:
“…it is necessary to very carefully study the text that has been prepared, so that it can then move in the legal direction that has been determined for it. Then, in the case of ratification, it is necessary to be on the alert for possible breaches of agreements by the other side and the blocking of its path. You know very well that some of the six governments in the opposite camp are not trustworthy in any way.”

The E3 may not be entirely “trustworthy,” but here, it’s all about business; there’s nothing Britain, France, Germany – and the rest of the EU, for that matter – want more than restarting business with Iran in the energy front and beyond.

The battle in Washington, on the other hand, will be gruesome, even as the Obama administration remains confident the dogs of war don’t have the necessary votes to block the implementation of the deal, as Iranian diplomats confirmed to me in Vienna during the negotiations.

In Tehran, on the other hand, the deal should be approved by the Consultative Assembly with no problems.

The bottom realpolitik line, as defined by Khamenei himself, is that the US/Iran Wall of Mistrust seems destined to remain in place – far beyond the nuclear agreement. Multiple Washington factions, not to mention the Pentagon, continue to regard Iran as a “threat”, a rogue nation, or evil incarnate, while Tehran sees Washington as “the heart of global arrogance”.

So the geopolitical path ahead for Iran – whatever happens after the deal is ratified in both capitals and the package of sanctions starts to unravel by late 2015/early 2016 – is Eurasia integration, as I outlined more here.

That implies closer cooperation – and a three-way strategic partnership – between Iran, Russia and China. And that further implies the “Bomb Iran” dogs of war getting even more bloodthirsty.

Pepe Escobar is the roving correspondent for Asia Times/Hong Kong, an analyst for RT and TomDispatch, and a frequent contributor to websites and radio shows ranging from the US to East Asia. Born in Brazil, he’s been a foreign correspondent since 1985, and has lived in London, Paris, Milan, Los Angeles, Washington, Bangkok and Hong Kong.