August 05, 2015 “Information Clearing House” – A video that shows Saadi Gaddafi, son of Libya’s late dictator Muammar, being tortured in jail has been condemned by lawyers and rights groups.

The nine-minute video shows Saadi, 42, in a green tracksuit, being hooked up to an improvised rack, apparently while in custody at Tripoli’s maximum security al-Hadba prison. His bare feet are then caned.

Segments show him sitting blindfolded and forced to listen to screams of other detainees being beaten in an adjacent room.

WARNING: Some may find elements of video disturbing

“The Tripoli authorities need to urgently establish exactly what did occur.”

The video’s release, by Arabic network Clear News, has alarmed lawyers worried about the treatment of other detainees at al-Hadba, where former Gaddafi-era officials are held.

“This is a shocking video that raises questions about conditions inside the prison,” said Karim Khan QC, London-based lawyer for Libya’s former prime minister al-Baghdadi al-Mahmoudi, also at al-Hadba. “The international community needs to demand a full investigation.” 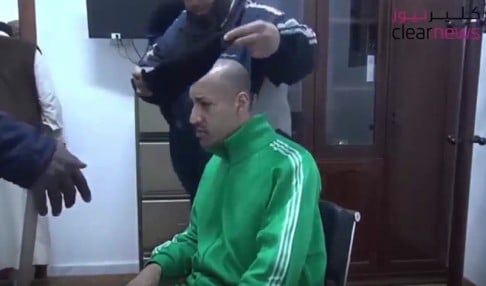 Gaddafi is blindfolded by his captors, perhaps to prevent him from identifying those who are about to torture him. Photo: YouTube/Clear News

Saadi is facing trial on charges including killing a football player while head of Libya’s football federation. During his father’s time in power, he established a reputation as a playboy and had a brief unsuccessful career playing for several Italian football clubs.

The undated video, consisting of several segments, was apparently made by Saadi’s captors, some of whom are seen in the footage in military uniform. At one stage, a captor asks Saadi if he wants to be beaten on the “feet or buttocks”. He answers: “What kind of question is this? My feet.”

Al-Hadba is held by Libya Dawn, a militia alliance that controls Tripoli and is battling forces of the internationally recognised government based in the east of the country. 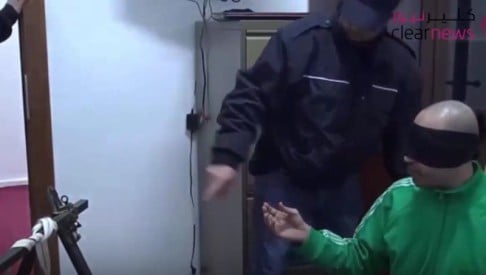 Gaddafi pleads with his captors as a metal rack with restraining straps is dragged into the room. Photo: YouTube/Clear News 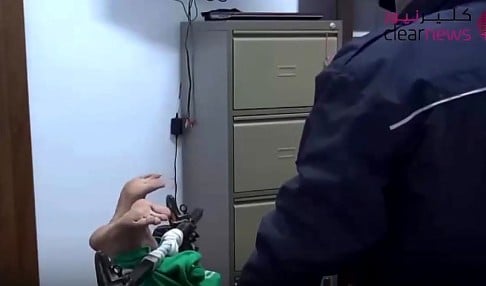 Gaddafi is bound and helpless, his feet strapped to the rack. Photo: YouTube/Clear News

The release of the video comes a week after Tripoli authorities pronounced death sentences for Saadi’s older brother, Saif al-Islam , and eight other former Gaddafi-era officials, including Mahmoudi, after a trial condemned by rights groups and the United Nations as lacking due process. Saif al-Islam was tried in absentia, since he has been held since 2011 by a former rebel group in Zintan, a region beyond Tripoli’s control. Right groups say the verdict was riddled with flaws.

Despite the manner of his downfall, the late dictator still enjoys pockets of goodwill.

In a rare demonstration, supporters in the eastern city of Benghazi on Tuesday shouted “Muammar, Muammar”, but dispersed after opponents opened fire with guns and hurled rocks.

No-one appeared to have been hurt among dozens of supporters of Gaddafi.

The Gaddafi supporters waved pictures of the man who had ruled for 42 years, and demanded the release of Saif al-Islam.

“Only God, Muammar and Libya!” the crowd chanted and waved the green flags of the old regime.

They dispersed after other residents, some of them carrying the Libyan national flag, opened fire.

Residents said this was the first protest of Gaddafi loyalists in Libya’s second-largest city, the cradle of the revolution, since 2011.

Frustration has been building among Libyans with the country’s chaos as two governments fight for power with the help of former rebels who have fallen out along political, tribal and regional lines.

Benghazi has been especially hard hit as fighting between forces allied to the official government based in the east and Islamist groups has closed the port, choking off wheat, food and petrol imports.