Pushing the Edge on Nuclear War 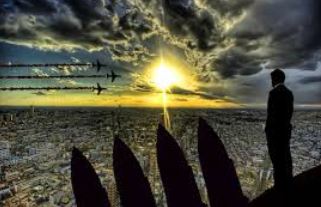 Official Washington’s neocons and liberal hawks are ratcheting up tensions again over Ukraine with the goal of humiliating and even destabilizing nuclear-armed Russia – and there’s no modern-day JFK to tamp down the enthusiasm, an existential risk that ex-U.S. diplomat William R. Polk examines.

August 30, 2015 “Information Clearing House” –   Decisions on nuclear weapons are and will remain the most important part of our quest for world security since even small mistakes or wrong actions would probably be catastrophic. We now seem to be moving closer to the danger point of provoking their use. So I want particularly to emphasize four points on the issues we all face and then raise a few other general considerations:

–Technical mistakes are always possible. More have happened than is generally known. In the Eisenhower administration, NORAD at least once spotted on radar a flight of geese over Iceland and went to Red Alert. It took a critical period of minutes to recognize the cause and stand down the alert. During that time, the danger of a missile launch or an aircraft attack was clear and present.

Some years later, a nuclear bomb was actually dropped on America (by a U.S. Air Force bomber flying where it should not have been while carrying a weapon it should not have been carrying).  Fortunately, the firing mechanism was faulty and the bomb did not go off. Had it detonated, in the confusion SAC and other formations would have been hard to stop from reacting to the supposed attacker. These are just two of many incidences of dangerous times.

I fear that we are again heading into dangerous times.

–Mutually Assured Destruction (MAD) is often said to be “stable” under certain conditions. It follows that it becomes unstable under others. Thus, we can predict that since our world is in rapid transformation, we cannot rely upon temporary stability.

For years, as former Secretary of Defense Robert McNamara observed, we have had at least 500 missiles armed with nuclear weapons on “hair trigger” alert in Europe. If you multiply the number of missiles by the number of months, the scattering of sites over a large area and continuous changes of personnel, it is obvious that even the best designed systems of command and control are always fragile.

Much more fragile is the situation in countries that do not spend the enormous amount of money (and talent) required to maintain missiles and nuclear weapons. Without “upkeep,” both missiles and bombs are inherently dangerous. And dangerous both to the country in which they are located and to their assumed targets. I find this particularly worrisome in the confrontation between India and Pakistan.

–Decisions on war and peace are often discussed in the abstract. That is, the assumption is that decision on their use is determined by “national” interests. As has been said, “The risk and consequences of nuclear war are so great as to outweigh any possible advantage in trying to use them.” That gives some analysts and practitioners a sense of security. They should not have it.

That is because decisions are not made by “nations” but by people. And, in the aftermath of the Cuban Missile Crisis, the deadly serious war game (designed by Thomas Schelling) played in the Pentagon (by teams of the most senior U.S. officials) demonstrated that there were circumstances in which even sober, well-informed and intelligent officials would find that their less ruinous choice would be opting for general war. [See Consortiumnews.com’s “Ukraine War: A Reverse Cuban Missile Crisis.”]

Ironically, I think we owed much of the “success” we had in the Cuban Missile Crisis not to the agreement to withdraw the Jupiter missiles from Turkey, although this was clearly necessary and I had long been advocating it, but to the bravery or even foolhardiness of  Nikita Khrushchev.  He risked a coup d’état and certain death by accepting the humiliation we necessarily imposed on him.

And Kennedy, of course, deserves great credit for partially masking the Russian defeat. That was the real significance of the withdrawal of the Jupiters. Had other men been in the White House or the Kremlin, the outcome might have been very different. I might not be writing or you reading. We both would probably have long since been dead (or for those of you born after 1962, you might never have lived).

–Since human beings make the decisions, we must be aware of decision makers’ vulnerabilities. During the Cuban Missile Crisis, I was one of about 25 civilians fully engaged in the events. I was not at the center but in the second or third “echelon.” So I did not feel the full strain, but by the Thursday of the Crisis, I was thoroughly exhausted. My judgment must have been impaired even though I was not aware of it.

I do remember, however, a terrible episode – fortunately lasting only a few minutes – at which I thought to myself, “let’s just get it over with.” When later I met with my Soviet counterparts, I got the impression, although they denied it, that my feelings were not unique. How the strain impacted on the inner group I can only guess. But reading McNamara’s later remarks, I suspect they were far stronger than on me.

First, contrast North Korea and Iraq: the logical deduction from the contrast of our approach to North Korea (which does have weapons) and Iraq (which did not) is that having a nuclear arsenal is the ultimate, sometimes the only, defense.

If defense is decided upon as a national objective, as presumable all governments will decide, nuclear weapons must be acquired covertly to avoid attack in the acquisition phase. This is presumably and logically still a danger in the Iran case if the Congress turns down the current agreement.

Second, Iran (along with Japan and other countries) illustrates that the division between nuclear bomb possession and nuclear bomb potential is fungible. If the Bush administration had pushed even harder toward a war with Iran or had Israeli threats been even more dire, Iran might have added to its extant and growing nuclear establishment, which then did not produce weapons, weapons from North Korea or Pakistan – and/or gone all out to build its own.

That would not have been an irrational act by “mad mullahs” but, under the circumstances, a wise move. Under parallel circumstances, the United States certainly would have done it. Russia, China, India and Pakistan did it. Israel is a different but comparable case.

Third, the India-Pakistan confrontation raises another related question. Even though Pakistan took much punishment in three wars without using its nuclear weapons, we should not be deluded into thinking that it never will. There must be a “red line” beyond which a nuclear war is inevitable.

Fourth, some commentators have argued that the risks of escalating to nuclear exchanges are so obvious and so well known that they will have a conservative effect on everyone. Generally that is true, but we have seen situations where decision-making  is variable, unpredictable, even irrational.

And, events which appear “singular” are actually steps in a process. Thus, when an act is taken and fails to produce the desired result or calls for a reaction, it may and usually does become step “A.” Step “B” becomes the logical extension. And somewhere down the alphabet successive steps became inevitable.

In the Cuban Crisis, JFK was acutely aware of this. He was determined not to be trapped by sequence, but it was difficult to avoid. Our military, as I had reason personally to see, was not so aware or so guided by concern with “process.”

Would the Pakistani general staff be smarter than ours? Does Pakistan have a civilian commander to take the place of JKF? And, finally, does Pakistan have a group that could perform like the Crisis Management Committee and other advisers in and around the presidency? If so, I have not seen them.

Fifth, Americans, and presumably all other peoples, have very short memories. This may be less true of officials than of the general public, but my reading of history and my experience in government make me doubt it.

I would wager that if one tested even supposedly well-informed college students on the report Carl Sagan orchestrated with some our leading scientists on the effects of nuclear weapons he would find little knowledge, understanding – or fear. And beyond students, I shudder to think what the result would be. (It would be a very useful contribution to world peace to republish Sagan’s report. I summarized it in a previous article.) To call it horrifying is to mince words.

The argument is often made that reduction to a “sufficient” deterrent number could work, but what that number would be, who could determine it for the several nation-states and how it could be enforced is, I think at best, problematical. Beyond zero, everything is slippery.

Sixth, Henry Kissinger to the contrary, there is no such thing as limited nuclear war. Kissinger, Schelling, Kahn, Wolhstetter et al were perhaps deluding themselves, but they certainly were deluding us.

This was the major result of the Pentagon war game I cited above. The war game showed conclusively that the basis of our Cold War strategy was perhaps just lucky but certainly was not decisive.  However, no one wanted to consider the result. We had invested in a whole industry of Cold War rhetoric and were determined not to give it up.

Last, while the minute hand on the clock on the cover of The Bulletin of the Atomic Scientists is probably now a bit further from midnight than at various times in the past, there are fresh warning signs that:

–We are moving back toward a confrontation with Russia over Ukraine. And, while Russia is not so formidable as it appeared a generation ago, it still has a nuclear arsenal as large and as deployable as ours. Led by us, NATO is moving into areas of great sensitivity;

–While North and South Korea seem to have reached a sort of deal over at least propaganda and artillery exchanges, all the elements are in place for further trouble;

–While the fate of Kashmir and the division of water between India and Pakistan catch our attention less often, the risks of a serious confrontation remain;

–While the United States has backed off from its blockade and sanctions program against Iran, the prospects for hostilities remain if Congress refuses to recognize the Iran nuclear agreement

If we want our children and grandchildren to live, we had better use the “minutes” before midnight to get our act in better shape, rather than just sitting back and relaxing. We have much to do and now is the time to get started.