gallery Canada: Citizen Participation Does Not End On Election Night 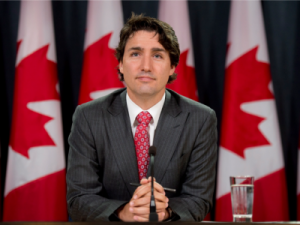 “This is not my victory, this is your victory.” This sentence uttered by the elated Trudeau on the election night is not a compliment to the millions of Canadians who voted strategically to bring about change but a call for continuing engagement. Civil society’s engagement must not end in the wake of the Liberals’ victory and the swearing in of a truly rainbow cabinet. It must remain consistent throughout the new government’s mandate. Trudeau articulated the simple truth that the government needs civil society to pursue change in the face of powerful opposition.

Canadians have different, sometimes divergent and at times opposing interests. For example, the top 1% of our compatriots, who appropriate over one third of the country’s cumulative income, promote policies that are likely to clash with the aspirations of our middle class, let alone of our poor (the word rarely uttered by our politicians, including Trudeau). All these groups provide their input and lobby the government in order to advance their interests.

Yet, the playing field is not level. Those with greater resources maintain professional lobbyists. Their work does not begin, nor stop on election night. Civil society cannot compete with their financial and personnel resources. But it can exercise pressure on the government through a range of other peaceful means, such as mobilization of citizens and an established capacity to ensure transparency of government actions. After all, the top 1% and the rest of us want to preserve social peace and forestall endemic violence plaguing more unequal societies.

It is in this context that citizens must redefine our country’s governance. The Liberal mandate promises to meet their deepest needs. But even with the best of sincere intentions, the government must be helped to make its mandate come true. François Hollande, Barak Obama, Alexis Tsipras – were all elected thanks to a widespread yearning for change. All three could not overcome the redoubtable forces of corporate community and transnational financial capital. Whatever their progressive credentials and discourse, their policies have come to resemble those of their right-wing predecessors.

One of us was in Greece on the eve of the September polls. Tsipras, elected earlier in the year to protect the country from foreign financial interests, had by then given in to the immense pressure from the creditors who imposed drastic austerity measures on his compatriots and severe limitations on his government’s independence. “What sense does it make to vote again if promises cannot be kept anyway?” we asked a Greek colleague. “Oh, we just love voting. It is like routing for the favourite soccer team: one is so happy when it wins even though it has no effect on our lives”.

Trudeau’s victory will not breed this kind of cynicism if civil society promptly uses the opportunity of the change of government to engage with it constructively and on a regular basis. The Liberal cabinet wants to put an end to the previous government’s practice of excessive control and opacity. This opens doors in the halls of power. The question is who is going to enter those doors: only corporate lobbyists or activists of civil society as well. These doors may not remain open for long, and it is essential for the middle and poor classes, the majority of our country’s citizenry, to make their voice heard insistently and clearly, to formulate and table constructive proposals and to follow through to their implementation.

If, in four years from now, the control of the social and economic agenda is, once again, in the hands of the corporate community, then our collective electoral efforts will have been in vain. If that happens, we cannot chastise our government; we will have only ourselves to blame.

The authors are, respectively, former CEO of the Canadian Council for International Cooperation and Oxfam Quebec and Professor of History at the Université de Montréal