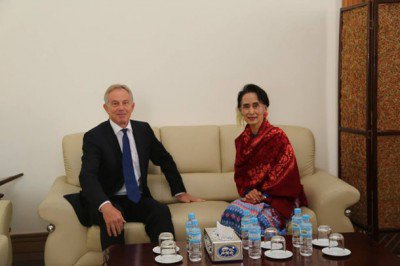 Former British prime minister Tony Blair was back in Burma earlier this month for at least his fifth visit since a quasi-civilian government assumed power under President Thein Sein.

Blair, who has staked out a lucrative niche in various advisory and entrepreneurial roles since leaving office, met with outgoing Union Parliament Speaker Shwe Mann and National League for Democracy chairwoman Aung San Suu Kyi in Naypyidaw on Jan. 7.

However, as in previous years, the purpose of his visit was less than clear.

A UK-based rights group, Burma Campaign UK, has consistently called on Blair to reveal the precise nature of his dealings in Burma. The group reiterated this stance in an email to The Irrawaddy on Thursday.

“Tony Blair should be transparent about what who he is working for and why he keeps visiting Burma,” said Mark Farmaner, Burma Campaign UK director.

“In other countries Tony Blair has been known to combine work with his foundations with his business interests.”

Farmaner said the advocacy group had repeatedly written to Blair’s office to seek details of his dealings in Burma, without receiving adequate clarification.

Burma Campaign UK has previously stated that Blair was believed to be advising Thein Sein in some capacity.

Blair’s former chief of staff from 1997-2007, Jonathan Powell, also has interests in Burma through his charity Inter Mediate, which works in conflict resolution.

According to informed sources, Powell helped broker a trip to Columbia in December for a delegation comprised of representatives from the Burma Army, three ethnic Karen armed groups including the Karen National Union, and the government-affiliated Myanmar Peace Center, to study the country’s peace process.

Farmaner said he wouldn’t be surprised if Blair’s recent visit was linked to Powell’s work in Burma.

“Jonathan Powell and Tony Blair are old friends from their time when Tony Blair was Prime Minister, and they have both been involved in Burma in recent years,” he said.

“The problem is that their involvement seems to have been more in support of President Thein Sein’s government than being neutral or supporting civil society and the democracy movement.”

The Irrawaddy wrote to Inter Mediate for comment but was yet to receive a reply at time of publication.

Bertil Lintner, a veteran Swedish journalist and the author of several books on Burma, said there were numerous foreign organizations jockeying for involvement in Burma’s ongoing peace process.

“It is just a waste of time and money in the ‘peace-industrial complex,’” Lintner said. “There is lots of money to be made there.”

The original source of this article is Irrawady
Copyright © Saw Yan Naing, Irrawady, 2016