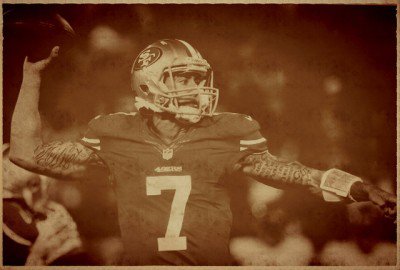 When Colin Kaepernick of the San Francisco 49ers chose to remain seated during the national anthem on August 26 prior to the start of the team’s game against the Green Bay Packers, as the rest of the stadium stood, he was not the only one engaging in a political act. But Kaepernick was likely the only one doing so consciously. And though he was outnumbered by tens of thousands in the stadium, and millions who watched on their television sets, Kaepernick’s bold statement was infinitely more powerful and outsized in its impact.

Those who – either out of pride or mere indifference – choose to stand for the national anthem were being just as political as Kaepernick. They were actively reinforcing the legitimacy of the political system that the anthem and the flag stand for.

Those who rule and benefit from the political status quo want compliance to be subconscious. If the ruling class is able to achieve blind respect for its symbols, they are able to associate the state with benevolent abstractions like “freedom” and “democracy” and hide its inherently unjust manifestations – police brutality, military adventurism, proliferation of weapons of mass destruction, the exacerbation of inequality, warrantless surveillance, mass incarceration, evisceration of social programs, natural resource extraction fueled by unrestrained profit seeking, etc.

With the atomization of society, the corporatization of political parties and the disappearance of unions in the neoliberal era, citizens have been largely relegated to the role of spectators in the political process, whose function is to support bipartisan American hegemony. Sports, where fans come together to watch passively, have become the most important venue to propagandize for militarism and American supremacy.

Chris Hedges calls sports stadiums “massive temples across the country where we celebrate our state religion.” Before the anthem is played, military personnel are brought on the field to celebrate their participation in illegal invasions and occupations, as if it were natural to lionize crimes against peace. The NFL has received millions of dollars over the last few years to carry out “patriotic displays” at football games. Militarism is cheered with thunderous applause and standing ovations.

This setting presents the perfect opportunity to maximize the impact of dissent. After his silent refusal to stand for the anthem in late August, Kaepernick’s protest overshadowed the game itself and became the most relevant topic in the sports world.

“I am not going to stand up to show pride in a flag for a country that oppresses black people and people of color,” Kaepernick said. “To me, this is bigger than football and it would be selfish on my part to look the other way. There are bodies in the street and people getting paid leave and getting away with murder.”

Kaepernick stated explicitly that he was refusing to symbolically validate the legitimacy of a political system that he sees around him being responsible for grave injustices. What was universally accepted a day before was now called into question. Other athletes, and even spectators, cannot just stand up, put their hand over their heart, and not recognize that they are exercising their agency for a political cause.

Sure enough, other athletes started following Kaepernick’s lead. A teammate. A player on another team. A soccer player. Entire high school teams. Elementary school children. Across the country, people are taking sides.

Rather than blindly propagating the liberal fantasy where everyone is fundamentally united, people are forced to choose: acceptance of the status quo, or rejection of it.

The side that succeeds will not do so by a majority vote. Dissidents like Kaepernick who seek political change don’t need half the stadium to sit down or kneel with them. All they need to do is demonstrate that people have the power to resist what is done in their name.

The more people realize this, the more they will start questioning on their own. They will no longer lend symbolic reinforcement to a political system that represents actions they oppose. Though they may be removed from decision making institutions like Congress, they will find they can participate in politics through one small, symbolic act that will make their voice suddenly matter.

Kaepernick is far from the first athlete to use his celebrity to confront the political system, of course. Most famously, Muhammad Ali defiantly refused to fight for the U.S. military in the Vietnam War and was convicted of draft dodging and sent to prison.

“I ain’t going no 10,000 miles to help murder and kill other poor people. If I want to die, I’ll die right here, right now, fightin’ you, if I want to die,” Ali said. “You my enemy, not no Chinese, no Vietcong, no Japanese.”

Ali’s principled stand played a major role in encouraging resistance and fomenting what grew into a massive anti-war movement that shocked the elite political class and eventually forced the withdrawal of American forces from South Vietnam.

50 years later, with state violence still wildly out of control in the United States, Kaepernick could similarly inspire the public to resist illegal and immoral atrocities sanctioned by the state. By taking a knee, dissenters become the center of attention. The symbolic rituals they refuse to take part in are exposed as vacuous propaganda exercises which serve to stifle critical thinking and induce passive acceptance of the status quo.

Judging by the vilification Kaepernick has received so far, the apologists for – and deniers of – injustice understand how serious a challenge Kaepernick presents if his example keeps spreading at its present rate.

This article was originally published by the American Herald Tribune