“We will never allow the founding of this kind of state,” despite all efforts to do so, the Turkish leader said in Istanbul, apparently referring to Syrian Kurds holding territories in the northern part of Syria, Turkish Anadolu news agency reports.

He went on to say that Turkey wants to see a “terror-free safe zone” in northern Syria to ensure the safety of its own southern and southeastern provinces.

“Our citizens are dying in Gaziantep and Kilis,” Erdogan stressed. The two Turkish cities lie close to the Syrian border, and have been targets of terrorist attacks.

“We decided that day that we would take an active role in Syria. The north of Syria is a region of threat for Turkey. We believe that there should be a safe zone, free from terrorism. If not, Gaziantep and Kilis will always be under threat,” he said, explaining the Turkish government’s decision to launch military operations in northern Syria, as reported by the Turkish Yeni Safak daily.

His words were then echoed by Turkish Prime Minister Binali Yildirim, who spoke about the goals of Turkey’s Operation Euphrates Shield in northern Syria.

“Our aim in being there is ensuring the safety of life and property of our citizens who live along our southern borders,” he said, as cited by Daily Sabah. 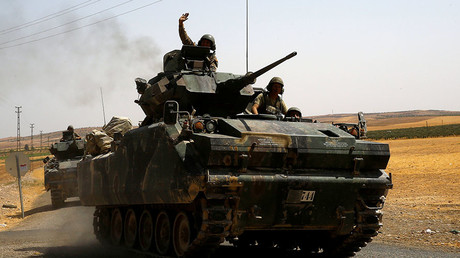 Erdogan backtracks on Syria goals after call with Putin, says terrorists are only target

Meanwhile, Nationalist Movement Party (MHP) leader Devlet Bahceli also stressed the importance of Turkey’s military efforts in Syria and said that the ongoing operation is bound to be successful.

“Operation Euphrates Shield should definitely be crowned with victory,” Bahçeli said at MHP headquarters in Ankara, adding that “if we emerged empty-handed from Al-Bab, we would endanger Diyarbakir and Ankara.”

Erdogan also mentioned other plans regarding Syria, saying that he will discuss the establishment of a no-fly zone over northern Syria with the Trump administration after the US president-elect’s inauguration on January 20.

Turkey earlier demanded the creation of a no-fly zone in the same area, but the Obama administration was reluctant to support it.

On Saturday, Erdogan also called for his nation to mobilize against terrorism, but stressed that the focus should fall primarily on economic development and not military activities.

“Our 2023 goal of ranking in the world’s top 10 economies can only be achieved through hard work. When I talk about a mobilization against terrorism, I am not talking about arming yourself and stepping out onto the streets,” he said at the DEIK General Assembly.

Erdogan made his statements as Turkey continues its operation Euphrates Shield in northern Syria, which it started on August 24. Ankara deployed ground and air forces to Syria with the stated goal of retaking areas held by Islamic State (IS, formerly ISIS/ISIL) and securing its southern borders.

Ankara’s forces, however, also engaged Kurdish YPG militia forces on multiple occasions, while many analysts claimed that suppressing Kurdish enclaves in Syria was the true goal of Euphrates Shield.

In late November, Erdogan stated yet another goal for the operation – to “end the rule of the tyrant al-Assad.” Statements such as these have caused consternation in Moscow, which asked the Turkish president to elaborate, after which Erdogan backtracked.

Earlier on Saturday, the Turkish General Staff said in a statement that the Turkish Air Force killed 68 Islamic State terrorists during the ongoing offensive in the northern Syrian city of Al Bab in a joint operation with Free Syrian Army units.