US Intelligence Recognizes the End of Unipolar World? “Growth of Populism… End of US Domination”

US Intelligence Recognizes the End of Unipolar World? “Growth of Populism… End of US Domination”

The last few years were marked by the debate on the characteristics of world politics after the end of the cold war. The majority of major analysts of the Anglo-American political-academic realm left no doubt that we were moving towards the formation of a unipolar world dominated by the United States. The evidence of the invasion of Afghanistan and Iraq, during the government of George W. Bush, founded on a document under the name of Project for a New American Century, left no margin for debate. This was heightened by the political crisis of the Western political system and the Anglo-Saxonization of International Relations, repeating the “scientific” discourses of the gurus, for example Kaplan, Kagan, Nye, Fukuyama, etc.

In the year 2008, among various experts we published the Diccionario Latinoamericano de Seguridad y Geopolítica (Latin American Dictionary of Security and Geopolitics), where we were among the few voices to note that we were moving towards a multipolar world, contrary to the opinions of the gurus; moreover, while there existed great expectations for the new President of the United States, we said that nothing indicated a change of foreign policy with respect to Bush junior.

Today, coinciding with the end of the presidency of Obama (the Nobel Peace Laureate who bombarded 7 countries in less than six years), we should note, in passing, that the Nobel Prize implies no guarantee. Alfred Nobel was the inventor of dynamite. President Wilson applied dollar diplomacy to the Caribbean, Theodore Roosevelt applied the policy of the bludgeon and Kissinger the so-called “Condor Plan”, and all were Nobel Prize winners. So Obama is one more confirmation that one must take a careful look when a US president gets a Nobel Prize.

In spite of the fact that he began with promises to withdraw his country from international conflict after the Bush junior mandate, Obama leaves office after having maintained the US nation in conflict for a longer period than any other president of the United States.

He expanded the air wars and the use of special forces throughout the world. The number of countries where US special forces are present has grown from 60 in 2009 to 138 in 2016 (in 70% of the countries of the world), according to data of the US Special Operations Command.

To analyse the legacy of President Obama, the US Council on Foreign Relations (CFR), that specializes in US foreign policy and international affairs, presented data on aerial attacks launched against foreign countries. In 2016 alone, the Obama government dropped at least 26,171 bombs.

While the majority of the bombardments took place in Syria and Iraq, US bombs also reached Afghanistan, Libya, Yemen, Somalia and Pakistan, seven of the biggest Muslim countries.

During the eight years of the Obama mandate, his government not only ordered numerous air attacks, but also reached a record in the sale of arms since the Second World War, attaining 265,471 million dollars.

All this allows us to understand a most important but little known occurrence, that took place on 9th of January 2017, and that we believe to be central. The National Intelligence Council (NIC) of the United States, in their intelligence report for the new President of the US, Mr. Trump, implicitly recognizes the failure of Obama’s war diplomacy, and our now aged Dictionary (surely taken as a “political and ideological essay” by the majority of the Argentinian “neutral scientific” community) is in tune with the report of January 9th. If there were a trial for bad practice in social sciences, many of the sacred monsters would be shaking. This is not a vulgar irony, but a profound reflection that we must all undertake, from the social sciences and the university realm, on the evolution and events of the world system.

For almost two decades, the Global Trends Report of the National Intelligence Council has given rise to strategic conversations inside and outside of the US Government. Since the First Global Trends Report was launched in 1997, a new report is published every four years after the US elections. 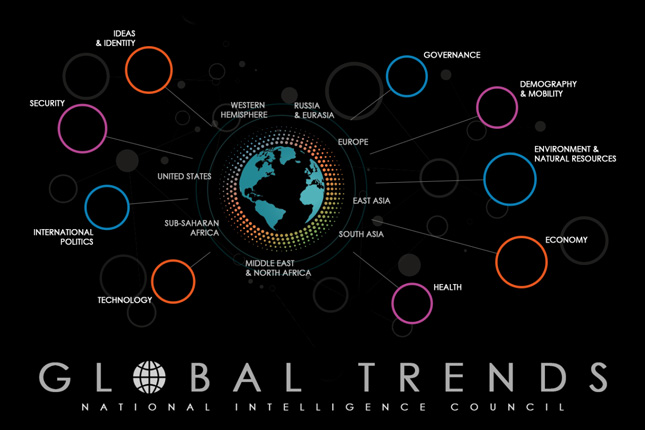 Global Trends constitutes an important and strategic report on the evaluation of intelligence services of the forces—and elections—that will shape the world during the coming two decades.

The latest edition of the report “Global Trends: Paradox of Progress” of the National Intelligence Council, presented on January 9th 2017, explores trends and scenarios for the next twenty years.

Critical to its insight and policy-relevance have been meetings worldwide with a wide range of interlocutors—including government officials, scholars, business people, civil society representatives, and others—in workshops and exchanges. There they have examined the perspectives of the economy, demographics, ecology, energy, health and governability, identity and geopolitics and it is vital to understand their consequences for the peace and security of the world.

The NIC crystallizes ideas gleaned from these meetings as well as extensive research in each Global Trends Report published every four years, between the US Presidential Election Day and Inauguration Day.

In general lines, the report of January 9th alerts us about a “close, obscure and difficult” future, due to the increase of hostilities among Nations at levels that have not been seen since the Cold War; as global growth decelerates, the post Second World War “order” is being eroded, and as nationalisms in the framework of globalization are accentuated.

The uncertainty about the United States, together with a “West that looks inwards” and the weakening of international human rights and standards of conflict prevention, have induced Russia and China to put US influence to the test”, says the report.

And it adds “…these challenges will be under the shadow of a hot war, but will generate profound risks of errors in calculation”.

Russia and China already appear as actors able to dispute US influence, recognizing the loss of hegemony, as well as regional conflicts, terrorism and an increase in inequality.

The entity, in their 226-page report published January 9th, alerts “that the new world panorama is bringing the US domination, that followed the cold war, to an end” and hence the next five years “will put the resilience of the United States to the test”. On the other hand, the NIC foresees a growth of populism in the political field at a world level that will “represent a threat to liberalism”. Here we should add that the report does not distinguish the xenophobic parties that have appeared in Europe and regional nationalisms for the preservation of sovereignty, such as occur in Iran or could take on new strength in South America.

More than ever, in the Patria Grande, we must seek to build an Ethical, Political and Strategic Power and we face the tension: Patria Grande taken seriously or nothing. Here is our future, as Manuel Ugarte said.

Translated from Spanish By Cuba-Network in Defense of Humanity
The original source of this article is Alainet
Copyright © Miguel Ángel Barrios, Alainet, 2017