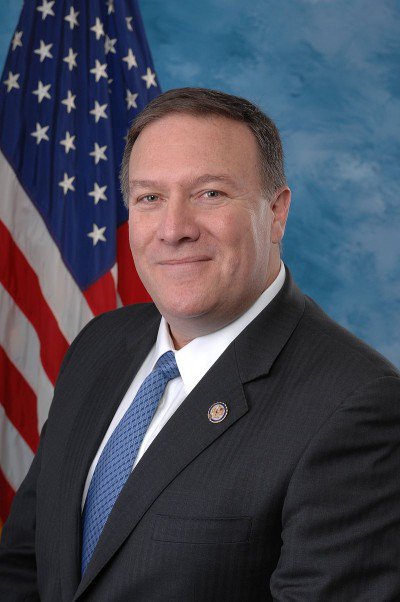 The new head of the CIA is a dangerous Christian extremist who believes the U.S. is at war with Islam.

Pompeo, a Kansas Republican and prominent member of the House Intelligence Committee, is a radical Christian extremist and a sharp critic of Islam who endorsesthe notion of a “Holy War” between Christians and Muslims, and believes the fight against terrorism is a war between Islam and Christianity.

Speaking at a church group in Wichita, Kansas, in 2014, Pompeo claimed that Christianity was the “only solution” to combat terrorism, arguing that the greatest “threat to America” is caused by “people who deeply believe that Islam is the way.”

This threat to America is from people who deeply believe that Islam is the way and the light and the only answer.

These folks believe that it is religiously driven for them to wipe Christians from the face of the earth.

They abhor Christians, and will continue to press against us until we make sure that we pray and stand and fight and make sure that we know that Jesus Christ our savior is truly the only solution for our world.

In addition, at an event hosted by a Virginia-based think tank last year, Pompeo again invoked the notion of a Holy War, describing the wars in which the U.S. is involved in as being “between the Christian West and the Islamic East.”

Cosmopolitan reports that Pompeo’s past comments concerning Muslims have drawn sharp criticism. For example, in the months after the Boston Marathon bombing in 2013, Pompeo took to the House floor to call on Muslim leaders to denounce acts of terrorism committed in the name of Islam, declaring:

It’s been just under two months since the attacks in Boston, and in those intervening weeks, the silence of Muslim leaders has been deafening.

Pompeo went on to suggest that failing to condemn the terrorist attacks made Muslim leaders “potentially complicit” in those attacks.

In another anti-Muslim incident earlier this year, Pompeo, using veiled threats and intimidation tactics, forced a mosque located in Kansas to cancel an appearance by a prominent Muslim leader, in part because the speaker was scheduled to appear on the Christian holy day of Good Friday.

Amid the fire hose of lunacy that is the Trump transition, however, Pompeo’s extremism has been overlooked. It’s worth pausing to appreciate the fact that America’s CIA will shortly be run by a man who appears to view American foreign policy as a vehicle for holy war.

The Washington Post reports Pompeo “is known as one of the more fanatical purveyors of conspiracy theories.” For example, previously Pompeo suggestedPresident Obama might have an “affinity for” radical Islam.

Bottom line: Pompeo is a dangerous Christian extremist. His Holy War mentality is alarming, and completely inappropriate for the Director of the CIA.

G.R Editor’s Note: What Mike Pompeo fails to acknowledge is that Christianity is embedded in the teachings of Islam. Muslims endorse the teachings of Jesus Christ, described as the penultimate prophet and messenger of God.

“In Islam, Isa ibn Maryam (Arabic: عيسى بن مريم‎, translit. ʿĪsā ibn Maryām, lit. ‘Jesus, son of Mary’‎), or Jesus, is understood to be the penultimate prophet and messenger of Allah (God) and al-Masih, the Arabic term for Messiah,[1][2] the “Christ”,[3] sent to guide the Children of Israel (banī isrā’īl in Arabic) with a new revelation: al-Injīl (Arabic for “the Gospel”).[4] Jesus is believed to be a prophet,[3] is reflected as a significant figure,[5] being mentioned in the Quran in 93 ayaat (Arabic for verses) with various titles attached such as “Son of Mary”,[6] ”Spirit of God”,[7] and the “Word of God” (source Wikipedia)

The original source of this article is Patheos
Copyright © Michael Stone, Patheos, 2017