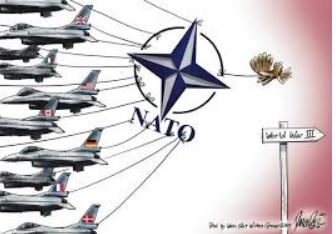 February 20, 2017 “Information Clearing House” –  President Dwight Eisenhower’s warning about the dangers of the military-industrial complex made half a century ago ring as loud and clear today. The soft coup being mounted against the Trump government by America’s ‘deep state’ reached a new intensity this week as special interests battled for control of Washington.

The newly named national security advisor, Lt Gen Michael Flynn, was ousted by Trump over his chats with Russia’s ambassador and what he may or may not have told Vice President Pence. The defenestration of Flynn appeared engineered by our national intelligence agencies in collaboration with the mainstream media and certain Democrats.

Flynn’s crime? Talking to the wicked Russians before and after the election. Big, big deal. That’s what security advisors are supposed to do: keep an open back channel to other major powers and allies. This is also the job of our intelligence agencies.

There is no good or bad in international affairs. The childish concept of ‘good guys’ and ‘bad guys’ comes from the Bush era when simple-minded voters had to be convinced that America was somehow in grave danger from a bunch of angry Mideast goat herds.

The only nations that could threaten America’s very existence are nuclear powers Russia, China, India, France, Britain and Israel (and maybe Pakistan) in that order.

Russia has thousands of nuclear warheads targeted on the US mainland. Any real war with Russia would invite doom for both nations. Two near misses are more than enough. Remember the 1962 Cuban missile confrontation and the terrifying 1983 Able Archer scare – near thermonuclear war caused by Ronald Reagan’s anti-Russian hysteria and Moscow’s panicked response.

Margolis’ #1 rule of international relations: make nice and keep on good terms with nations that have nuclear weapons pointed at you. Avoid squabbles over almost all matters. Intelligence agencies play a key role in maintaining the balance of nuclear terror and preventing misunderstandings that can cause war.

Gen. Flynn was a fanatical anti-Islamic wing nut. He was, to use Trumpese, a bigly terrible choice. I’m glad he is gone. But Flynn’s sin was being loopy, not talking on the phone to the Russian ambassador. The White House and national intelligence should be talking every day to Moscow, even ‘hi Boris, what’s new with you guys? ‘Nothing much new here either besides the terrible traffic.’

The current hue and cry in the US over Flynn’s supposed infraction is entirely a fake political ambush to cripple the Trump administration. Trump caved in much too fast. The deep state is after his scalp: he has threatened to cut the $80 billion per annum intelligence budget – which alone, boys and girls, is larger than Russia’s entire defense budget! He’s talking about rooting waste out of the Pentagon’s almost trillion-dollar budget, spending less on NATO, and ending some of America’s imperial wars abroad.

What’s to like about Trump if you’re a member of the war party and military-industrial-intelligence-Wall Street complex? The complex wants its golden girl Hilary Clinton in charge. She unleashed the current tsunami of anti-Russian hysteria and demonization of Vladimir Putin which shows, sadly, that many Americans have not grown beyond the days of Joe McCarthy.

It’s sickening watching the arrant hypocrisy and windbaggery in Washington over alleged Russian espionage and manipulation. The US has been buying and manipulating foreign governments since 1945. We even tapped German Chancellor Angela Merkel’s cell phone. This week Wikileaks issued an intercept on CIA spying and manipulation of France’s 2012 election. We live in a giant glass house.

The Russians are not our pals. Nor are they the evil empire. We have to normalize our thinking about Russia, grow up and stop using Moscow as a political bogeyman to fight our own internal political battles.

Right now, I’m more worried about the far right crazies in the Trump White House than I am about the Ruskis and Vlad the Bad.

The views expressed in this article are solely those of the author and do not necessarily reflect the opinions of Information Clearing House.

Eisenhower’s Farewell Address to the Nation; “This conjunction of an immense military establishment and a large arms industry is new in the American experience. The total influence – economic, political, even spiritual – is felt in every city, every Statehouse, every office of the Federal government.