The Russia “Hacking” Allegation: A Cyber-Gulf of Tonkin?

The Russia “Hacking” Allegation: A Cyber-Gulf of Tonkin?

There was no “Russian hacking” of the 2016 election 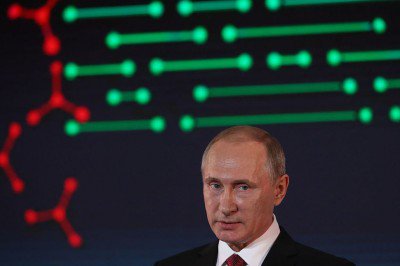 The “cyber-security” firm that everyone is depending on to make the case for Russia’s alleged “hacking” of the 2016 presidential election, CrowdStrike, has just retracted a key component of its analysis – but the “mainstream” media continues to chug along, ignoring any facts that contradict their preferred narrative.

As Voice of America – hardly an instrument of Russian propaganda! – reports:

This retraction pulls the rug out from under CrowdStrike’s identification of the hacking group that supposedly broke into the Democratic National Committee’s server. Last year, the company announced that “Fancy Bear” – the name they gave to the hackers – had used identical tools and methods to hack into software used by the Ukrainian military, an act they claimed led to the destruction of 80% of the Ukrainians’ howitzers in their war with rebel forces. Up until that point, CrowdStrike had merely “suspected” that the Russians were behind the DNC hack. However, given the Ukrainian “evidence,” combined with the assumption that the rebels are “Russian-backed,” CrowdStrike head honcho Dmitri Alpervovitch told the Washington Post:

“Now we have high confidence it was a unit of the GRU,” i.e. Russian military intelligence.

Their retraction means that “high confidence” has been considerably lowered down to the level of a mere “suspicion.” Forced to backtrack in light of VOA’s definitive takedown, CrowdStrike’s whole case collapses. Despite dubbing the alleged hackers with the nom de guerre of “Fancy Bear” – as in the Russian bear – the evidence that supposedly identifies whoever broke into the DNC servers as GRU agents is virtually nonexistent. And the remaining “evidence” is hardly impressive. As cyber-security expert James Bamford pointed out:

“Last summer, cyber investigators plowing through the thousands of leaked emails from the Democratic National Committee uncovered a clue.

“A user named ‘Феликс Эдмундович’ modified one of the documents using settings in the Russian language. Translated, his name was Felix Edmundovich, a pseudonym referring to Felix Edmundovich Dzerzhinsky, the chief of the Soviet Union’s first secret-police organization, the Cheka.”

So why would the nefarious albeit highly skilled Russians leave this glaring clue – in Cyrillic, no less! — for all to see? Or was this “clue” deliberate misdirection on the part of the real hackers? The latter seems highly likely – not that the geniuses over at CrowdStrike would want to understand this. After all, they were paid by the Democratic National Committee, which used the incident to drum up a narrative that the evil Russians were trying to damage Hillary Clinton and elect Donald Trump. Follow the money, folks – and Alperovitch’s position with the Atlantic Council, an organization that is assiduously trying to launch another cold war with Moscow.

Remember, the FBI never looked at the DNC servers: they depended on CrowdStrike — which has a $150,000 a year no bid contract to perform “security” services for the agency — to analyze the forensic evidence. Shawn Henry, CrowdStrike’s CSO and head of CrowdStrike Services, is a former assistant executive director of the FBI.

Another leg of the Russian conspiracy theory is the “dirty dossier” compiled by “former” MI6 agent Christopher Steele, which alleges that the Kremlin has compromising information on Trump and is blackmailing him to sell his own country down the river. So who was Steele’s main source? He is one Serge Millian, who goes by at least two other names, and who even friends describe as

“[A] big-talking schmoozer than a globe-trotting interlocutor. They say he’s a self-promoter with a knack for getting himself on television … ‘He’s an opportunist. If he sees an opportunity, he would go after it,’ said Tatiana Osipova, who was a neighbor of Millian’s when he lived in Atlanta and who in 2006 helped him found a trade group, the Russian American Chamber of Commerce in the USA.”

And don’t forget: Steele paid his informants, hardly a way to incentive getting truthful intelligence. Millian denies being Steele’s source, and says the allegations in the dossier are without any basis in fact.

So if CrowdStrike’s analysis of the alleged hacking of the DNC is collapsing, why aren’t we reading about it in the “mainstream media”?

Because the media is no longer serving the interests of its readers: it has become the opposition party, intent on discrediting and overthrowing Trump’s presidency. It is, as Trump puts it, “fake news.”

And so we are forced to witness the fraud of the House Intelligence Committee conducting hearings, which are predicated on an assumption that has no basis in reality, and has already been debunked. Indeed, Democratic party politicians – and the anti-Trump wing of the GOP, represented by Senators John McCain and Lindsey Graham – have invested all their political capital in an obsessive anti-Russian campaign, the goal of which is to make any rapprochement between the United States and Russia impossible.

A fraud is being perpetrated in order to achieve certain geopolitical ends. There is historical precedent for this.

In the summer of 1964, the US media reported that North Vietnamese forces had attacked an American destroyer, the USS Maddox, in international waters off the coast of North Vietnam. On the front page of the Washington Post a headline screamed: “American Planes Hit North Vietnam After Second Attack on Our Destroyers; Move Taken to Halt New Aggression” – except it wasn’t true. There had been no attack: bad weather and inexperienced sonar technicians had mistaken phantom “targets” for North Vietnamese attackers. The Maddox had suffered no damage. The “attack” never occurred.

That didn’t stop Lyndon Baines Johnson from going on national television and citing the “attack” as a pretext for escalating the war, and then going to Congress asking for passage of a resolution authorizing “all necessary action to protect our Armed Forces and to assist nations covered by the SEATO Treaty.” What became known as the Gulf of Tonkin Resolution passed the Senate with only two dissenting votes: the vote was unanimous in the House.

Thus a nation was led down the path of escalating a disastrous war on the strength of a lie.

The Russian “hacking” narrative – which all too many Democrats (and a few Republicans) are calling an “act of war” – is just such a lie. It is a cyber-Gulf of Tonkin “incident,” i.e. a made up story that is being used as a pretext for two purposes: 1) To accuse the Trump administration of “collusion” with the Russians, and 2) to block any effort to short-circuit the developing cold war with Russia and repair relations with Moscow.

The media, which has lost all sense of proportion in their eagerness to topple Trump, is promoting a dangerous lie that could lead directly to a conflict with Russia. Do we have to wait for the truth to be declassified twenty years later, as in the case of the Gulf of Tonkin? Well, no, we don’t – because the phony “Russian hacking” narrative has already been debunked by no less than a source than the Voice of America.

So the truth is already out there. The question is, when will it be acknowledged? It may take a while for the facts to percolate out there – Glenn Garvin, writing in the Miami Herald, is one of the few who have reported the VOA scoop — but the truth will come out. It always does. My fear is that it won’t come out before irreparable damage is done – not only to our relations with Russia, but to the political discourse in this country, which is already being poisoned almost beyond repair.

NOTES IN THE MARGIN

You can check out my Twitter feed by going here. But please note that my tweets are sometimes deliberately provocative, often made in jest, and largely consist of me thinking out loud.

I’ve written a couple of books, which you might want to peruse. Here is the link for buying the second edition of my 1993 book, Reclaiming the American Right: The Lost Legacy of the Conservative Movement, with an Introduction by Prof. George W. Carey, a Foreword by Patrick J. Buchanan, and critical essays by Scott Richert and David Gordon (ISI Books, 2008).

You can buy An Enemy of the State: The Life of Murray N. Rothbard (Prometheus Books, 2000), my biography of the great libertarian thinker, here.

The original source of this article is Antiwar.com
Copyright © Justin Raimondo, Antiwar.com, 2017

Posted by Jaime C. on April 20, 2017 in Uncategorized and tagged Russia, U.S. elections.