In an explosive interview with Megyn Kelly at the 21st St. Petersburg International Economic Forum, the Russian President, Vladimir Putin, systematically destroyed many of the narratives promulgated by the enemies of the Syrian state who seek to turn the country into the new Libya.

Although the panel discussion covered many issues and featured other speakers, one of the most crucial sections was when Kelly questioned Putin over the Syrian conflict.  The opening exchange consisted of Kelly asking the Russian leader whether he believed Assad was an “evil guy?”, allowing Putin to articulate one of the central reasons why Russia supports the Syrian government. Putin emphasized that it is not Assad that Russia is protecting per se; instead, Russia is protecting “the Syrian statehood” from collapsing into an abyss of chaos similar to the one we have seen Libya descend into since 2011:

“It’s not President Assad whom we are protecting; we are protecting the Syrian statehood. We don’t want their interior to be a situation similar to that in Libya, or that in Somalia, or in Afghanistan – in Afghanistan NATO has been present for many years, but the situation is not changing for the better. We want to preserve the Syrian statehood. On the basis of resolving this fundamental issue we would like them to move towards settling the Syrian issue through political means. Yes, probably everyone there is to blame for something, but let’s not forget that were it not for active interference from outside, this civil war probably would not have broken out.”

Ever since NATO forced regime change in Libya – through waging a bombing campaign coupled with supporting al-Qaeda connected rebel legions on the ground – it has been in total chaos. The North African country has been a failed state for years, with rebel factions fighting over control of certain regions.

As journalist Neil Clark and others have pointed out, in July 2010, the Telegraph listed Libya as number one on their six best exotic cruise destinations. By August 2011, numerous reports detailed how many factions of the Libyan opposition were slaughtering black people on mass. In 2012, a disturbing video surfaced which purported to show Libyan rebels forcing African prisoners to eat flags while being kept in giant cages. Earlier this year, the International Organization for Migration (IOM) said that African migrants were being bought and sold in slave markets.

This is just a glimpse into the utter chaos and degradation that Libya has descended into after NATO ‘liberated’ the country back in 2011, and it provides a window into what Syria would be like if the West forces regime change in Damascus. 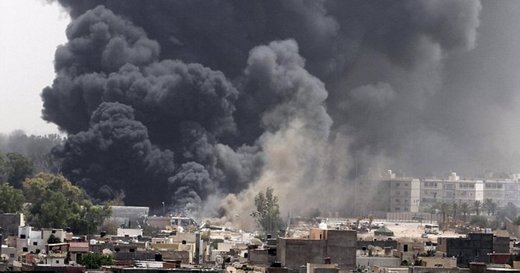 “In Iraqi Kurdistan, the militants used chemical weapons and the world community recognised it. So, they know that the militants have got chemical weapons. But according to the OPCW [Organization for the Prohibition of Chemical Weapons] Syria has destroyed its stocks of chemical weapons. You see, if pretexts are created without any real willingness to look into the matter, it’s not going to lead us anywhere. Let’s talk substantively. Did Assad make mistakes? Yes, probably a lot of them. But those who oppose him, are they angels? Who [are] murdering people and executing children – beheading people. Should we support those people?”

On multiple occasions, investigations have indicated that chemical weapons have been used by the Syrian opposition. In May 2013 for instance, the Commissioner of the UN’s Independent International Commission of Inquiry for Syria, Carla Del Ponte, said in an interview that there was evidence which suggested that the rebels, not the Syrian army, used chemical weapons:

“During our investigation for crimes against humanity and war crimes, we collected some witness testimony that [appeared to confirm] that some chemical weapons were used – in particular nerve gas. What appeared to our investigation was that it was used by the opponents, the rebels, and we have no indication at all that the Syrian government have used chemical weapons. Of course, now, the special commission will investigate and tell us what it is exactly. But I was a little stupefied that the first indication we got [was] about the use of nerve gas by the opposition.”

In regards to the nature of the Syrian opposition, it is not just the Russian President who believes that many of the opposition forces are far from angelic. Even the former Prime Minister of Britain, David Cameron, who was always a strong proponent of forcing regime change in Syria (he was also heavily involved in the Libyan war), admitted in early 2016 that many of the ‘moderate’ rebels actually belonged to “relatively hardline Islamist groups” (i.e. terrorist groups):

Furthermore, a declassified US military intelligence report – by the Defense Intelligence Agency (DIA) – from August 2012, clearly states that the opposition was the walking antithesis of moderate:

“The Salafists, the Muslim Brotherhood and AQI [Al-Qaeda in Iraq], are the major forces driving the insurgency in Syria.” The report added that “AQI supported the Syrian opposition from the beginning, both ideologically and through the media,” and that “events are taking a clear sectarian direction.”

When Kelly again brought up the chemical weapons attack in April of this year, asking whether the Russian leader believed the videos of the alleged victims of the attack were “fake,” Putin responded by describing the incident as a “provocation” designed to blame the Syrian President:

“As for those people who were killed or who suffered because of the use of weapons – including chemical weapons, this is false information. As of now, we are absolutely confident that this is just a provocation; President Assad didn’t use chemical weapons. All of this was orchestrated in order to accuse him. Moreover, our intelligence services have got information that in another district of Syria, not far from Damascus, there were plans to reproduce this scenario, and we made these plans public. Those who had been planning these actions thought it better not to engage in these actions.”

When Kelly pressed him further, asking: “are we really to believe that the whole thing was staged?”, Putin responded by saying:

“The answer is very simple and you know it. Yes, sarin could have been used by someone, but not by Assad. It could have been used by someone in order to accuse Assad. So, we have to understand who is to blame; otherwise, if there is no true investigation, it is only going to play into the hands of those who orchestrated it. I would like to ask you a question: why didn’t everyone go right away to inspect the airbase, to the spot where chemical weapons allegedly had been used? Why didn’t they want to go to see the aircraft that had been allegedly used to perform the strike? The answer is very simple: because they were afraid that the truth would come to light.”

Logic alone would tell you that the Syrian government did not use chemical weapons in April. Why would Assad order the use of chemical weapons when the Syrian government had the upper hand in the conflict? Assad may be a lot of things, but he is not suicidal. Why would he give the enemies of Syria justification to bomb the country or launch a full-scale invasion? As the former US congressman and host of the Liberty Report, Ron Paul, said at the time:

“It makes no sense, even if you were totally separate from this and [you] take no sides of this and you were just an analyst, it doesn’t make sense for Assad, under these conditions, to all of the sudden use poison gasses… I think [there’s] zero chance that he would have done this deliberately.”

For the sake of the Syrian people, let’s hope that Syria does not become the new Libya.

Steven MacMillan is an independent writer, researcher, geopolitical analyst and editor of  The Analyst Report, especially for the online magazine “New Eastern Outlook”.