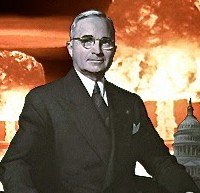 In 1869, the Russian chemist Dmitri Mendeleev published the first widely recognized periodic table of elements. The periodic table indicates the elements in order of atomic number (the number of protons).

It was the result of analysing and grouping properties of these chemical elements. In fact, it has been applied to predict properties of elements later discovered.

Tom Lehrer, among his other humorous achievements, composed a song of the periodic table to the melody of Arthur Sullivan’s aria “I am the very model of a modern major general” from Pirates of Penzance (original lyrics by W.S. Gilbert).

Recent remarks by the serving POTUS (i.e. Trump) regarding small Asian states and big atomic weapons have led many among the chattering classes — especially the compatibles or faux gauche who dominate much of what counts as opposition discourse in the English-language/US-based portion of the Web — to engage in a favourite CIA pastime; namely, remote psychoanalysis. The “fire and fury” threats — badly plagiarised Macbeth if truth be told1 — are viewed as yet another proof that the famously democratic US electoral system has produced an office-holder whose insanity ostensibly surpasses any other in recorded history.

Perhaps it would be useful to consider this proposition — the insanity of Mr Trump — in a more scientific manner, especially since Professor Dr. Freud never claimed psychoanalysis was a science, and psychiatry’s claim to be more than an adjunct to the pharmaceutical and behavioural control industries (marketing and police) was long ago discredited at McGill University.2

It would take considerable time and research to elaborate all the details but we might start with a “periodic table of presidential elements”. They would be ordered according to atomic number. Now the first question that needs to be resolved is how to calculate that: does the atomic number mean the number of bombs subject to the presidential discharge or does it mean the number actually detonated or is a factor to be included for testing and live targets. I think I will leave this to the folks at Sandia National Laboratories since they have the most experience and data. But one could probably ask the folks at DuPont too, for a free-enterprise estimate.

In any event the table begins periodically with Roosevelt, Franklin D. Now Rooseveltium can be safely said to have a low atomic number, only testing (as far as we know). So maybe this element is the baseline.

Then comes Trumanium (symbol Harry S): Trumanium has an atomic number of at least 2 for the live targets utterly demolished (for those who did not study for the quiz, 1 for Hiroshima and 1 for Nagasaki). Shortly thereafter the number increases drastically in the Test category, with near death use during the US savaging of Korea (let us say about 1952). The name of this presidential element is easily confused with Tungsten (Wolfram) found in high quantities in the Korean peninsula.

After that comes Eisenhowerian (symbol IKE): since this coincides with the fusion bomb and murdering dissenters connected with the atomic bomb program by calling them spies, there are now four components of the atomic number. How many does he have? How many has he used? How many could he use? How many people are killed or imprisoned to insure that they can be used? So Eisenhowerian has an atomic number not easily estimated but at least two in the last category: for the Rosenberg murders in New York’s prison.

Well, Kennedyium (symbol JFK): He certainly had some and some thought the Soviet Union might force him to use them. Of course, Eisenhowerian included the atomic number for medium-range missiles stationed in Turkey which were discretely removed when Mr Kruschchev agreed to withdraw the missiles from Cuba. But Kennedyium has an extremely short half-life, not only the John isotope but also the Robert (RFK) isotope. It would appear that isotope Edward was not radioactive.

Nixonium (symbol Dick) would probably be ranked after Trumanium simply because of the supply and propensity — if surviving psychopath, his former National Security Adviser and Secretary of State — is taken into account. Kissinger is a synthetic isotope of Rockefellerium (symbol Exxon) and is probably as close to plutonium as one can find in an entity of human description without actual detonation of a nuclear bomb or swimming in Fukushima’s reactor core. However, the negotiated arms reduction during this period probably means that the overall atomic number of Nixonium is relatively low — if not the death rate in Laos, Vietnam, Cambodia or Chile.

Following Nixonium we find Carterium (symbol Amy) (Fordite can be treated as a weak Nixonium isotope, with a Kissinger neutron or two). Carterium probably has the lowest atomic number in the table after Rooseveltium. However, I leave it to more expert researchers to verify this.

The quantum leap — if not in intelligence or honesty — comes with Reaganium (symbol Custer). This has an atomic number so high, including its isotopes, that the presidential element decayed on its own without the addition of fissile material — even threatening to melt down while on camera and open mike. Theoretically the first time that a presidential element would have started a chain reaction in public where everyone could see before the lights went out. Reaganium is probably worse than plutonium since the traces of the element can be found throughout the US in conspicuous public spaces. Even one of the country’s capital airports is visibly contaminated with this atomic waste– renamed with a warning sign unheeded.

Bushium (symbol CIA) comes in several isotopes and despite its obviously long half-life has received relatively little attention from researchers. Bushium is a presidential element which is found mainly in artillery and small-arms (e.g. anti-tank munitions). Bushium is like the notorious “neutron bomb” (technically called an “enhanced radiation” device) advertised during the Reaganium period, although its development predates either weapon. Most of the Middle East is contaminated with Bushium as has been attested by the cancer statistics in Iraq. No statistics for Afghanistan appear to be available.

Clintonium (symbol CLiT) is a complex element with two lethal isotopes. Although it would seem quite close in the table to Bushium, one can only say that it is an element most lethal in North Africa, the Balkans and Haiti.

Obamagen (symbol BO) is probably the most lethal presidential element since Nixonium but without the mitigating factor of negotiations. Although unconfirmed the atomic number is probably raised by a fractional kill factor for undeclared detonation(s) in Asia. But research in the presidential elements is actually rather new and so much work needs to be done. What is clear, however, is that Clintonium when processed in presidential particle accelerator (one is located beneath the NY Fed and the other beneath the Pentagon) enhanced with Obamagen is very unstable and probably as capable of a self-induced chain reaction as the presidential pile fueled by Reaganium. In fact, it may be that both Clintonium and Obamagen are not pure presidential elements at all but heavy isotopes of Reaganium.

No doubt the folks who have the control rods in their hands — not as many believe the President — have been playing with the atomic core for the past eight years. Whatever lethality might be expected from this element, the fact is that as of this date he has a low atomic number, lower than Harry Truman or Dwight Eisenhower. He has not yet bombed the 3 – 6 million plus people into kingdom come that Truman, Eisenhower and Nixon did. He did not displace or murder 20% of Central America’s population like Reagan and Bush I. He has not yet destroyed an independent country or two, including sodomising heads of state.

But he lives in an atomic bomb factory owned and run by the descendants of the racists and fascists and just plain blue-suited corporate psychopaths who identify their personal enrichment with human well-being. It is the function if not the nature of the man (or woman) who sits in that great atomic pile at 1600 Pennsylvania Avenue to behave like a presidential element — that means as fissile material to be deployed in the destruction of the elite’s “enemies both foreign and domestic” as he has sworn to do — and as his vice president Mr Pence (about whom precious little is said) has also sworn.

So when we look, scientifically that is, at the psychopathology of the US regime — which in its essence is nothing more than a thermo-nuclear bomb factory for protecting banks and primary commodities, pirates or software magnates — we should pay attention to the atomic numbers and assign them to the proper presidential elements. 72 years ago the US became the greatest industrial murderer on the planet. Judging by the state of its civilian economy murder is about the only industry that is flourishing, both import and export. One more element in the periodic table is not going to change that.

Dr T.P. Wilkinson writes, teaches History and English, directs theatre and coaches cricket between the cradles of Heine and Saramago. He is also the author of Church Clothes, Land, Mission and the End of Apartheid in South Africa (Maisonneuve Press, 2003). Read other articles by T.P.

This article was originally published by Dissident Voice.

1. In Macbeth the phrase is “full of sound and fury, signifying nothing”

2. McGill’s Dr. Ewen Cameron conducted secret psychiatric “experiments” for the CIA during the 1950s. His  conduct was the only the most notorious of the MKUltra program’s activities. The term “extraordinary rendition” which became fashionable during the GW Bush reign was, in fact, nothing new. The CIA had been contracting its work outside the US for decades to enhance deniability and maintain secrecy.