The CIA Torture Case: On Eve of the Trial, Psychologists Agree to Settlement in ACLU Case on Behalf of Three Torture Victims 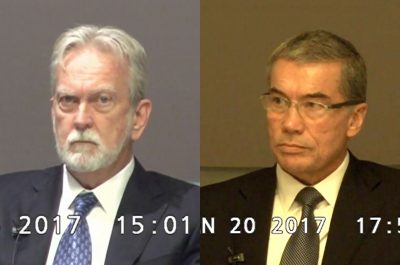 NEW YORK — In a first for a case involving CIA torture, the American Civil Liberties Union announced a settlement today in the lawsuit against the two psychologists who designed and implemented the agency’s brutal program. A jury trial was scheduled to begin on September 5, after the plaintiffs successfully overcame every attempt by the psychologists to have the case dismissed.

The lawsuit was brought by the ACLU on behalf of Suleiman Abdullah Salim, Mohamed Ahmed Ben Soud, and the family of Gul Rahman, who froze to death in a secret CIA prison. The three men were tortured and experimented on using methods developed by the CIA-contracted psychologists, James Mitchell and John “Bruce” Jessen.

“This is a historic victory for our clients and the rule of law,” said ACLU attorney Dror Ladin. “This outcome shows that there are consequences for torture and that survivors can and will hold those responsible for torture accountable. It is a clear warning for anyone who thinks they can torture with impunity.”

The full terms of the settlement agreement are confidential.

“We brought this case seeking accountability and to help ensure that no one else has to endure torture and abuse, and we feel that we have achieved our goals,” the plaintiffs said in a joint statement praising the settlement. “We were able to tell the world about horrific torture, the CIA had to release secret records, and the psychologists and high-level CIA officials were forced to answer our lawyers’ questions. It has been a long, difficult road, but we are very pleased with the results.”

Until now, every lawsuit trying to hold people accountable for the CIA torture program has been dismissed at initial stages because the government successfully argued that letting the cases proceed would reveal state secrets. But unlike previous cases, this time the Justice Department did not try to derail the lawsuit. The defendants attempted to dismiss the case multiple times, but the court consistently ruled that the plaintiffs had valid claims.

“Government officials and contractors are on notice that they cannot hide from accountability for torture,” said Hina Shamsi, director of the ACLU National Security Project. “Our clients’ groundbreaking case has changed the legal landscape. It showed that the courts are fully capable of handling lawsuits involving abuses committed in the name of national security.”

The case was filed in October 2015, basing its legal claims on the declassified facts in the executive summary of the Senate report on CIA torture. During the lawsuit’s discovery process, dozens of new documents detailing the torture program were unearthed, and the case forced former senior CIA officials Jose Rodriguez and John Rizzo — in addition to Mitchell and Jessen themselves — to testify about torture during depositions.

“Thanks to our clients’ commitment and bravery their stories are public, as are new details about the design and implementation of the CIA torture program,” said ACLU attorney Steven Watt. “This settlement is a testament to their perseverance and will help them heal.”

In the court’s ruling earlier this month sending the case to trial, the judge wrote,

“The evidence would support a finding Defendants designed the [enhanced interrogation techniques] to be used on detainees, and thus they clearly had knowledge they would be so used.”

In addition to torturing prisoners themselves, Mitchell and Jessen trained other CIA personnel in their methods. In 2005, they founded a company that the CIA contracted with to run its entire torture program, including supplying interrogators for the agency’s secret “black site” prisons. The government paid the company $81 million over several years.

“I am so glad to help our clients make a difference through this case,” said Lawrence Lustberg of the law firm Gibbons PC. “We have long partnered with the ACLU in torture transparency and accountability litigation, and it is deeply satisfying to have come this far.”

The plaintiffs sued Mitchell and Jessen under the Alien Tort Statute — which allows federal lawsuits for gross human rights violations — for their commission of torture; cruel, inhuman, and degrading treatment; nonconsensual human experimentation; and war crimes.

As part of the settlement, the plaintiffs and defendants agreed to the following joint statement:

“Drs. Mitchell and Jessen acknowledge that they worked with the CIA to develop a program for the CIA that contemplated the use of specific coercive methods to interrogate certain detainees.

“Plaintiff Gul Rahman was subjected to abuses in the CIA program that resulted in his death and in pain and suffering for his family, including his personal representative Obaidullah. Plaintiffs Suleiman Abdullah Salim and Mohamed Ahmed Ben Soud were also subjected to coercive methods in the CIA program, which resulted in pain and suffering for them and their families.

“Drs. Mitchell and Jessen assert that the abuses of Mr. Salim and Mr. Ben Soud occurred without their knowledge or consent and that they were not responsible for those actions. Drs. Mitchell and Jessen also assert that they were unaware of the specific abuses that ultimately caused Mr. Rahman’s death and are also not responsible for those actions.

“Drs. Mitchell and Jessen state that it is regrettable that Mr. Rahman, Mr. Salim, and Mr. Ben Soud suffered these abuses.”

The attorneys representing the plaintiffs are Shamsi and Ladin of the ACLU National Security Project and Watt of the ACLU Human Rights Program; Emily Chiang of the ACLU of Washington; Lustberg, Kate Janukowicz, Daniel McGrady, and Avram Frey of the law firm Gibbons PC; Paul Hoffman of Schonbrun, Seplow, Harris & Hoffman LLP, Los Angeles; Anthony DiCaprio of the Law Office of Anthony DiCaprio; and Jeffry Finer of the Center for Justice, Spokane, Washington.

All images in this article are from ACLU.