The West has effectively preyed on the Kurds’ internal divisions and has used some factions to fulfill an imperialist goal of dividing and weakening the Near and Middle East. The Kurdish people are diverse, and in recent years, aspects of their culture and customs have been discussed in mainstream media. But the behavior of some of their more corrupt factions must also be addressed.

A history of human rights abuses

Separatist Kurdish factions have a vested interest in claiming Arab, Assyrian or Armenian history as their own. However, at times when they have failed in that endeavor, they have resorted to destroying any relevant history pertaining to the areas they are trying to claim altogether. In this aspect, they operate in a similar manner to Daesh/ISIS.

Recent reports show Kurdish flags painted on Assyrian reliefs in Dohuk, not once, but twice in quick succession. There is evidence of hammering and chiseling taking place, as well as numerous suspected bullet holes. The Kurdistan Regional Government have not condemned these acts or committed any resources to watching over and protecting Assyrian heritage.

Every time the Kurds failed in an attack against Turkey, they would migrate to Syria and try to claim Syrian land as their own. For instance, they tried to claim the Syrian city of Ayn al Arab, naming it “Kobani/Kobane.” The origin of the name is the word “company,” a reference to a German railway company that built the Konya-Baghdad railway. The Kurds also claimed Al Qamishli, another Syrian city, as their illegal capital and renamed it Qamislo/Qamishlo.

It’s worth mentioning that Kurds are not even a majority in the land they claim as theirs in northeast Syria. For example, in the governorate of Al Hasakah, they amount to about 30 to 40 percent of the population. That number has decreased since the outbreak of the current Syrian conflict, as many Kurds have left for European countries.

Most of them have fled to Germany, where their numbers are about 1.2 million, a little less than the number of Kurds living in Syria. However, they do not seem concerned about seeking autonomy there. They only seek it in the Middle Eastern countries that have provided them with refuge all of these years – these are the countries they want to stab in the back instead of thanking them for their hospitality.

Amnesty International’s many refutable allegations against the Syrian government and the Syrian Arab Army cannot be taken at face value in the absence of other corroborating reports. In some cases, however, they do report truthfully, such as when they released a report in 2015 accusing the YPG, the militia of Syria’s Kurdish population, of a range of human rights abuses.

“These abuses include forced displacement, demolition of homes, and the seizure and destruction of property,” the group wrote. “In some cases, entire villages have been demolished, apparently in retaliation for the perceived support of their Arab or Turkmen residents for the group that calls itself the Islamic State (IS) or other non-state armed groups.” Amnesty International has also documented the use of child soldiers, according to Lama Fakih, a senior crisis advisor for the group.

Some Kurds claim that their “Kurdistan” is “multicultural and multi-religious,” which is disingenuous when you consider that those additional cultures consist of people now dwelling amongst a Kurdish majority in lands the Kurds took by force. On September 25th, these minorities were faced with the prospect of casting meaningless votes for the KRG Referendum in Iraq since, even if they all voted “no,” they would nonetheless be outvoted by the Kurdish “yes” majority and as a result would still find themselves subject to a Kurdish government and agenda, if the Iraqi government recognized the referendum.

“When working in Iraqi Kurdistan, I was struck by the prevalence of regressive attitudes, including racism and sexism. I returned recently from Iraqi Kurdistan where I spent a couple of weeks investigating the Islamic State (IS) group. Working mostly in the vicinity of Sulaymaniyah and Dohuk, I could not help but notice a great many societal and cultural characteristics that somewhat surprised me.

Considering what is happening right next door in Syria, the level of anti-Syrian racism did catch me off guard. I came across such prejudice almost daily. A taxi driver quipped in Sulaymaniyah: ‘These Syrians are ruining our country.’ Another taxi driver was quite upset at Syrian kids who were washing car windows and selling tack. ‘These are dirty kids.’ he said. It was all but unusual that internally displaced persons of Iraqi or Syrian Arab descent who had fled to Iraqi Kurdistan were discussed using such language.It wasn’t just taxi drivers. In the Sulaymaniyah governorate building, an officer deemed it appropriate to prep us for our interviews in refugee camps in the area. She told me, verbatim, that Syrian refugees ‘complain about everything.’ In another city, a police chief was astonished and disappointed that my colleagues and myself were applying for a permit to work in a camp inhabiting Syrian refugees. The police chief stated: ‘But these are Syrian refugees!’ There was no shortage of contempt in his voice.

I had been fully aware that Kurdish nationalism flirts with highly questionable portrayals of Arabs, Persians, and Turkish people. In Iraqi Kurdistan, I was surprised at how prevalent some of those attitudes seemed to be.” 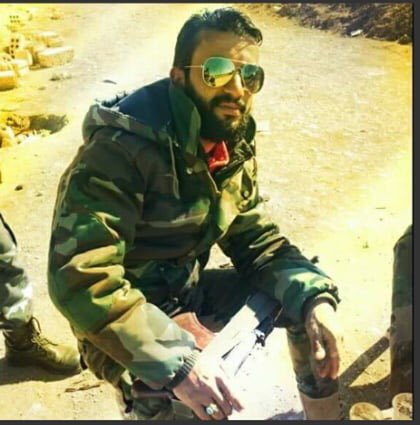 #Qamishli :
The young Man, Ali Faisal al-Khuzaim killed by the Kurdish militias because he broke away from them and joined Syrian army #SAA

This article was originally published by The Rabbit Hole.

Featured image is from this.

Posted by Jaime C. on October 14, 2017 in Uncategorized and tagged Kurds.