In early November, the organization Moms Across America launched a nationwide campaign to finally ban glyphosate herbicides in every state in America.

With the formidable support of millions of people collectively, the Organic Consumers Association, the Institute for Responsible Technology, and the Thinking Moms Revolution, a unification is taking place to put actual pressure on state governors to act now.

While people who understand the dangers of glyphosate herbicides surely also understand the revolving door between government and corporations such as Monsanto or DuPont, BASF or Dow Chemical, and these people typically understand that a “ban” on something is technically using government force to stop something, the situation we are in, under the rule of government, leaves people with no option but to demand that this government use the force it has given itself to do something right. 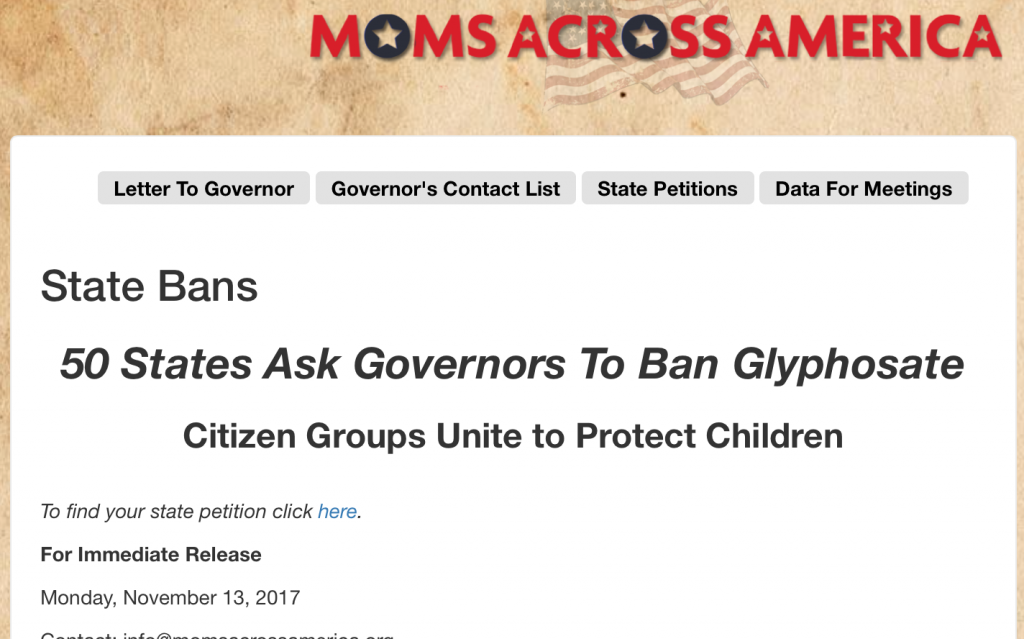 According to a statement from Moms Across America:

“European Member states, after considering volumes of scientific studies and numerous testimonies by lawyers and researchers, have refused to renew the license for glyphosate. If it is not safe for Europeans, and Malta, Sri Lanka, The Netherlands, and Argentina who have banned glyphosate, then we do not want glyphosate in our United States. We urge our governors to take bold steps like the Governor of Arkansas and Missouri did in banning Dicamba, and ban glyphosate herbicides and toxic chemicals immediately.” – Zen Honeycutt, Executive Director of Moms Across America

Glyphosate herbicides or Monsanto’s RoundUp weed killer, the most widely used herbicide in history, has been proven to cause serious harm to life. Glyphosate has contaminated our planet and is now found in our children’s urine, mother’s milk, our bloodstreams, and our food, beverages, and water.

In 2015 the International Agency for Research on Cancer (IARC) of the World Health Organization found that glyphosate “is a probable human carcinogen.”

In July of 2017 the California State Office of Environmental Health Hazard Assessment (OEHHA) added glyphosate to its Prop 65 list of known carcinogens.

In October of 2017, after 1 million Europeans requested a ban, 72% of the Members of the European Parliament voted to BAN glyphosate and EU Member states have refused to renew the license.”

The MAA statement includes further evidence that will probably be succinctly presented to these people who claim to represent us in government.

The best citizens can do, is hold our “representatives” accountable, hold their feet to the fire and present them with the evidence for why glyphosate shouldn’t be legal in such a succinct, undeniable and public way, that when they refuse to meet the people’s demands, it is so clear that they are not representing us it becomes a public spectacle.