In Pakistan Street protests have affected cities like Imamabad, and is spreading in other cities as well. About six persons have died and more than two hundred have been injured. PTI has reported that the police aided by paramilitary Rangers and Frontier Constabulary yesterday launched a massive operation against activists of Tehreek-i-Khatm-i-Nabuwwat, Tehreek-i-Labaik Ya Rasool Allah and Sunni Tehreek Pakistan religious groups who had blocked a key highway to Islamabad for nearly three weeks. The protesters have been laying siege to the capital for about three weeks demanding removal of Law Minister Zahid Hamid for changes in a law related to the Khatm-i-Nabuwwat (finality of prophethood) oath in the Elections Act 2017.They alleged the action undermined Islamic beliefs and linked it to blasphemy. The government has already amended the law and restored the original oath but the hard line clerics refused to call of the protests until the minister is sacked.

The real power holder former PM Nawaz Sharif is believed to have given a thought to remove the Minister in order to pacify the protests; present government is under much pressure due to political problems which emerged since the revelations of Panama Papers, and strict actions taken by Judiciary have made the government weak and in all likelihood in next elections it may find itself in troubles in electoral battles. The present protest is a continuation of the politically unstable Pakistan since the revelations of Panama Papers.

The root cause of the political problems started when on right grounds Judiciary removed PM Sharif on misdeeds in Panama Papers. The new PM is not capable to manage the affairs of the state. He is transitory PM knowing well that he has been on the position just due to grace of Nawaz family.

Elections in Pakistan are due to take place in 2018 and the prospects of Nawaz’s party are not very strong at the moment. Moreover the external pressures from world on the containment of terrorism has placed stress on the political leaders of country.

In these backgrounds the protest assumes importance. As the elected political leadership has proved unsuccessful to control the developments in the country. Now they have asked for the help from army which is already eyeing for increased role in the political space in the country particularly after the departure of Nawaz Sharif.

Army has taken a recommendatory view so far by advising government to take steps with cautions. The Army chief Gen. Bajwa are in touch with Prime Minister Shahid Abbasi and has asked to deal the protest peacefully, and violence should be avoided from both sides. 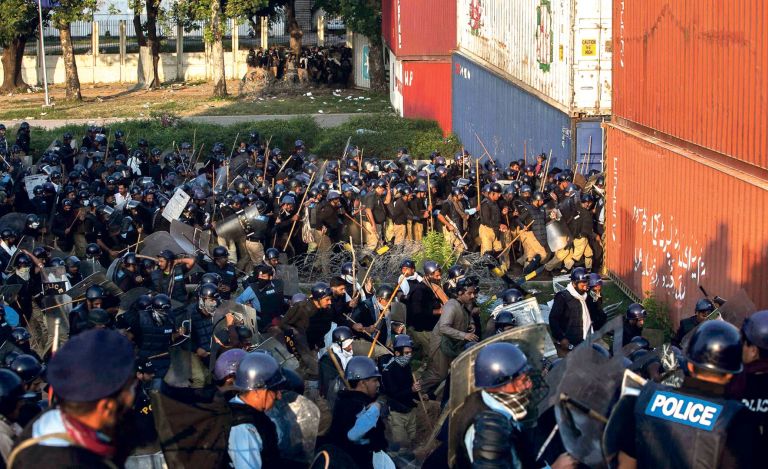 There is also alternative analysis that army may come in direct conflict with the conservative elements and Pakistan may find itself more into trouble. The release of Hafiz Saeed is also not good for the political system of the country as these are major destabilizing elements of the country. Their activities if supported more by army and establishment of more hardliners in the socio-politico milieu of the country do not suggest good things to come.

The recent developments in Pakistan are result of the non nation building in the country. Several countries are passing through this phase but Pakistan has emerged as a classical case where army, terrorists and conservative elements have come to stay in the political world of the country and have prevented genuine development of democratic elements in the country.

In next few days the developments will take a new path and it is hoped that Pakistan is able to control the situation but major question remains unanswered which forces are in real terms responsible for such developments? And why Pakistan is getting into fragmentation? Role of army will be observed in the days to come. Terrorists and fundamentalist have engulfed the society. Can governance manage these or army is about to enter more aggressively in the governance?