The US and global economy are approached the latter stages in the credit cycle, during which financial asset bubbles begin to appear and the real economy appears to be at peak performance (the calm before the storm). This scenario was explained in my 2016 book, ‘Systemic Fragility in the Global Economy‘. In coming weeks I will be posting in serial form the concluding chapter of that book for readers on this blog, entitled ‘A Theory of Systemic Global Fragility‘.

Is Bitcoin a Bona Fide ‘Bubble’?

One can debate what constitutes a financial bubble—i.e. how much prices must rise short term or how much above long term average rates of increase—but there’s no doubt that Bitcoin price appreciation in 2017 is a bubble by any definition. At less than $1000 per coin in January, Bitcoin prices surged past $11,000 this past November. It then corrected back to $9,000, only to surge again by early December to more than $15,000. Given the forces behind Bitcoin, that scenario is likely to continue into 2018 before the bubble bursts. The question of the moment, however, is what might be the contagion effects on other markets?” 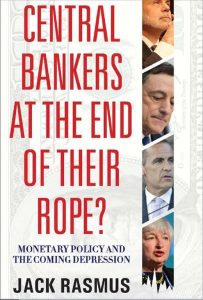 If Blockchain and software tech company ICOs are driving Bitcoin and other crypto pricing, what’s additionally creating the bubble?…..Who is buying Bitcoin and cryptos, driving up prices, apart from early investors in the companies? ……the absence of government regulation and potential taxation of speculative profits from price appreciation has served as another important driver of the Bitcoin bubble bringing in still more investors and demand and therefore price appreciation. No regulation, no taxation has also led to price manipulation by ‘pumping and dumping’ by well positioned investors….. Another factor driving price is that Bitcoin has become a substitute product for Gold and Gold futures……But what’s really driving Bitcoin pricing in recent months well into bubble territory is its emerging legitimation by traditional financial institutions………futures and derivatives trading on Bitcoin are set to begin in December 2017 in official commodity futures clearing houses, like CME and CBOE…..Bitcoin ETFs derivatives trading are likely not far behind……….big US hedge funds are also poised to go ‘all in’ once CME options and futures trading is established…… Declarations of support for Bitcoin has also come lately from some sovereign countries………While CEOs of big traditional commercial banks, like JPM Chase’s Jamie Dimon, have called Bitcoin “a fraud”, they simultaneously have declared plans to facilitate trading in the Bitcoin-Crypto market.

Bitcoin demand and price appreciation may also be understood as the consequence of the historic levels of excess liquidity in financial markets today. Like technology forces, that liquidity is the second fundamental force behind its bubble. To explain the fundamental role of excess liquidity driving the bubble, one should understand Bitcoin as ‘digital tulips’, to employ a metaphor.

The Bitcoin bubble is not much different from the 17th century Dutch tulip bulb mania. Tulips had no intrinsic use value but did have a ‘store of value’ simply because Dutch society of financial speculators assigned and accepted it as having such. Once the price of tulips collapsed, however, it no longer had any form of value, save for horticultural enthusiasts.

What fundamentally drove the tulip bubble was the massive inflow of money capital to Holland that came from its colonial trade in spices and other commodities in Asia. The excess liquidity generated could not be fully re-invested in real projects in Holland. When that happens, holders of the excess liquidity create new financial markets in which to invest the liquidity—not unlike what’s happened in recent decades with the rise of unregulated global shadow banking, financial engineering of new securities, proliferating liquid markets in which securities are exchanged, and a new layer of professional financial elite as ‘agents’ behind the proliferating new markets for the new securities.

A subject of current debate is whether Bitcoin and other cryptos can destabilize other financial asset markets and therefore the banking system in turn, in effect provoking a 2008-09 like financial crisis………….Deniers of the prospect point to the fact that Cryptos constitute only about $400 billion in market capitalization today. That is dwarfed by the $55 Trillion equities and $94 trillion bond markets. The ‘tail’ cannot wag the dog, it is argued. But quantitative measures are irrelevant. What matters is investor psychology. ……For example, should cryptos develop their own ETFs, a collapse of crypto ETFs might very easily spill over to stock and bond ETFs—which are a source themselves of inherent instability today in the equities market. A related contagion effect may occur within the Clearing Houses themselves. If trading in Bitcoin and cryptos as a commodity becomes particularly large, and then the price collapses deeply and at a rapid rate, it might well raise issues of Clearing House liquidity available for non-crypto commodities trading. A bitcoin-crypto crash could thus have a contagion effect on other commodity prices; or on ETFs in general and thus stock and bond ETF prices.”

The above text is an excerpt from Jack Rasmus‘ forthcoming article in the December-January issue of the European Financial Review. Jack Rasmus’ most recent book is  ‘Central Bankers at the End of Their Ropes?’