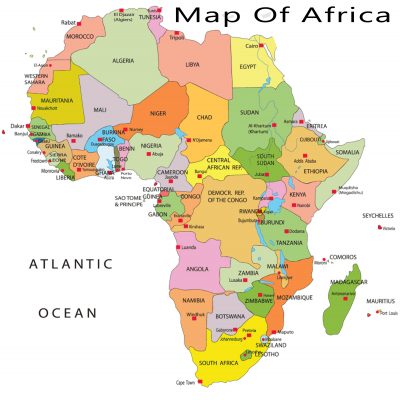 Africa’s known for its internal divisions and predisposition to conflicts, especially those which are encouraged from abroad, and it’s with this in mind that there are plenty of reasons to worry about its stability in 2018. Proceeding from North Africa to Southern Africa, Egypt is regularly attacked by terrorists in the Sinai and elsewhere, posing a real threat to President Sisi’s government. In addition, Egypt believes that its water security is endangered by Ethiopia’s plans to build the Grand Renaissance Dam, and the continued development of this megaproject is expected to see tensions soar between the two states as it eventually nears its completion. This could possibly even see Egypt extend covert support to Ethiopia’s Oromo people, the country’s largest minority that’s been engaged in large-scale anti-government protests over the past year and recently started clashing with the Somalian minority over land rights, a conflict which might grow to take international dimensions if Somalia’s Al Shabaab terrorist group decides to intervene in support of its ethnic compatriots.

Egypt’s next door neighbor of Libya is still caught up in a multisided civil war, albeit one which has since crystallized mostly into an east-west rivalry and could be partially resolved by next year’s presidential elections, dependent upon Saif Gaddafi and General Haftar entering into an agreement to politically cooperate with one another. As for Algeria, the inevitable passing of aging and reportedly incapacitated President Bouteflika might spark speculation about the country’s possible return to its 1990s civil war, but its “deep state” will probably ensure a smooth leadership transition just like the one that took place in Uzbekistan in 2016. Moving southwards into the Sahara, Mali is still a terrorist-infested nest that France and its fellow G5 Sahel allies are unable to resolve. Moreover, its problems have begun to spill across the border into neighboring Burkina Faso and Niger, the latter of which is an exceptionally fragile and failing state with the world’s highest birthrates.

Niger abuts Nigeria and is allied with it in a War on Terror against Boko Haram and alongside Chad and Cameroon, but the West African giant on whose territory most of this conflict is being fought is beginning to unravel along regional lines. There have always been divisions between the Muslim north and the Christian south which were only united into a single colony in 1914, spilling over most dramatically in the 1967-1970 Nigerian Civil War over the southeastern self-declared secessionist region of “Biafra”. Nowadays there are signs that the chronic impoverishment of this oil-rich region is once again giving rise to anti-state violence, whether in the form of “rebels”, bandits, or terrorists. Worse still, “Biafra” borders the Northwest and Southwestern regions of Cameroon that are at the heart of that country’s own separatist conflict over what its supporters call “Ambazonia” and which has recently turned very violent over the past couple of months.

Continuing along, not only is Cameroon afflicted by Boko Haram and “Ambazonian” separatism, but it’s also caring for many refugees from the Central African Republic, which has been in a genocidal state of civil war between Christians and Muslims since 2013, ignobly competing with neighboring South Sudan for being the most dysfunctional state in the world and together with it forming what can be described as a “Failed State Belt” in the continental heartland. While these two conflicts might worsen in the coming year, their humanitarian consequences might pale in comparison to if the Democratic Republic of the Congo descends into civil war, which it’s basically on the brink of doing already. The last Congo War killed an estimated 5 million people, mostly from disease and starvation, and the present low-level one is being “justified” on the basis of President Kabila delaying national elections but is mostly driven by mineral interests.

The killing of 15 UN peacekeepers in northeastern Congo by the anti-Ugandan and Salafist terrorist organization called the “Allied Democratic Forces” shows that this corner of the country isn’t immune from the violence either, and Uganda might be in for a rough ride if President Musaveni passes away without any clearly designated successor, though the scenario could unfold according to the prospective Algerian one where the “deep state” takes matters into its own hands in the interests of national stability. Nearby Burundi was once thought to be a crisis in the making, but President Nkurunziza has succeeded in wiping out the anti-government fighters who were opposed to his controversial third term in office. That being said, Uganda, Rwanda, and Burundi were all involved to one extent or another in the last Congo War, so the collapse of the Democratic Republic might have unexpected consequences for them as well.

Nearing the southern tip of the continent, the ruling FRELIMO party of gas-rich Mozambique will probably continue peace talks with the Cold War-era armed RENAMO opposition, and Zimbabwe will likely proceed with its leadership transition in peace. As for regional hegemon South Africa, newly elected ANC leader Cyril Ramaphosa will continue to reform the party from within by making it more business-friendly and less multipolar ahead of the 2019 national elections, though apart from the ever-present potential for labor and xenophobic violence, no large-scale political destabilization is expected. Altogether, to summarize Africa’s most important 2018 fault lines, the War on Terror in Mali might spread throughout other parts of West Africa, and Nigeria and Cameroon’s separatist conflicts might begin to morph into a single transnational battlespace. Ethiopia will continue to be challenged by some Oromo groups, while the Congo could slide into a civil war that once again draws in many international participants. Finally, North Africa might stabilize, while East and South Africa will remain mostly the same.

The post presented is the partial transcript of the CONTEXT COUNTDOWN radio program on Sputnik News, aired on Friday Dec 29, 2017: