Hurricane Harvey brings to mind the devastations of predecessors like Katrina, whose death toll would have been reduced had the Bush administration accepted Cuban doctors.

Of the many stories written about Hurricane Katrina in autumn 2005, and its devastating consequences, one crucial element is virtually overlooked. During the all-important hours after the tropical cyclone laid waste to sections of south-eastern United States, the Bush administration ignored the aid of its Cuban neighbor.

Cuban leader Fidel Castro offered to ship over 1,600 doctors and dozens of tons of medical supplies to the US’s affected areas. Considering the decades-long terrorist attacks perpetrated against Cuba by US governments, in addition to a crippling embargo, it was a noble gesture by the Castro government.

A gesture largely erased from the record too – it wouldn’t do for the powers-that-be to raise Cuba’s profile while questioning the leader of the free world. Castro’s remarkable offer was not altogether surprising if one looks at the record.

Scant coverage is given to the fact that since the early 1960s Castro sent thousands of Cuban doctors to some of the earth’s most neglected areas – from Pakistan to Ethiopia to Guatemala. By 2007, Cuba had shipped more medical personnel to the developing world than the US, Canada, Britain, Germany and France combined. That tells something about the global priorities of the Western powers.

“the Cuban doctors have won the hearts of the Pakistani nation… We have no words to describe your services for the earthquake victims, but we will remember it for a long time to come”.

Unsurprisingly, such humanitarianism has led to close Pakistani-Cuban relations. In 2016, with Cuba enduring its worst drought in over a century, Pakistan shipped 15,000 tons of rice to Cuba. Pakistan’s then Prime Minister Nawaz Sharif said of the crucial lifeline,

“We recognize Cuba as a proven friend that has stayed by our side in tough times”,

and reflecting on Cuba’s assistance during the earthquake, Sharif continued,

“that example of sincerity, care and friendship towards Pakistan has few parallels in modern history”. 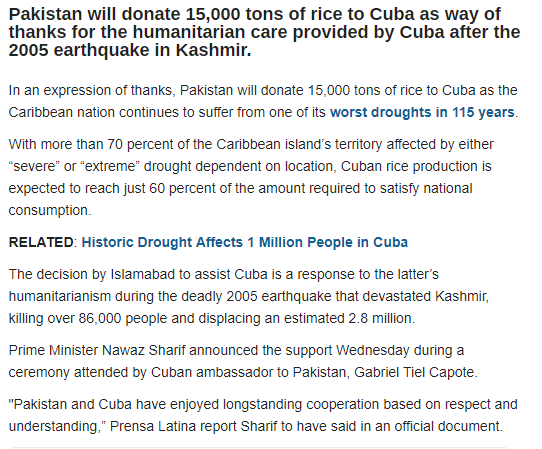 Surely Cuba’s vital aid to Pakistan (and others) in its hour of need did not go unnoticed by USPresident George W. Bush. However, it had already been deemed more important by his administration to preserve the superpower’s prestige rather than protect its own citizens. Over 1,800 Americans died from the damage caused by Hurricane Katrina, with New Orleans suffering widespread devastation, but many would surely have been saved with Cuban assistance.

Cuba has one of the finest health care systems in the world, with the lowest infant mortality rate in the Western hemisphere. The average Cuban life expectancy is 79 years, one of the highest in the region and greater than that of the US, the most powerful nation on earth.

In the affected areas in the wake of Hurricane Katrina, the greatest problem was a lack of medical needs – “only a small portion of those seeking medical assistance were receiving care due to a shortage of medical personnel and supplies”. The world’s richest country did not have enough doctors when it mattered most.

Later, a bemused Castro responded to the rejection of his offer by saying that,

“the American government’s pride dictated that their own citizens had to die on the roofs of their houses, or on the roofs of hospitals from which no-one evacuated them, or in stadiums, or in nursing homes where some of them were given euthanasia in order to prevent a horrible death by drowning. That’s the country that portrays itself as ‘a defender of human rights’.”

Perhaps we shouldn’t be surprised by President Bush’s rejection of badly needed foreign assistance, especially when examining his own record on human rights – not just in far-flung places like Afghanistan and Iraq, but within the borders of the US.

At the end of Bush’s second term, the number of poor in the US increased by 8.2 million people, much of this decline in living standards occurring before the 2008 economic meltdown. The number of children living in poverty rose by over 20% during the Bush years (to 14.1 million), while the total of medically uninsured Americans stood at 46.3 million people, again a more than 20% rise. The list goes on.

Hurricane Katrina was a signal to everyone in the US that climate change was an issue no longer to be ignored. Still, the Bush administration didn’t lift a finger to tackle one of the great problems of our time – the US, along with China, is the main contributor to rising carbon emissions.

In fact Bush and company made efforts to, “manipulate the work of federal climate scientists and exercise strict control over which scientists are allowed to talk to the media, and which scientific results are communicated to the public”.

In August 2017, the devastation wrought by Hurricane Harvey was another reminder to Americans of the frightening effects of climate change. This follows on from Hurricane Sandy in 2012, which inflicted enormous damage on Cuba and much of North America – and was by diameter the largest Atlantic hurricane on record.

Harvey, meanwhile, was the strongest storm to hit Texas in over half a century, killing dozens of people – a year’s worth of rain fell in just a few days over the vulnerable city of Houston, breaking previous rainfall records. Texas Governor Greg Abbott estimated the damage at up to $180 billion, far more costly than the infrastructural outlay following either Hurricane Katrina or Sandy.

The US’s inertia in curbing climate change is being greatly felt. Yet the Republican Party continues to do nothing – rather, they want to further aggravate the problem by increasing the burning of fossil fuels like coal. As the US is the world’s second largest contributor to greenhouse emissions, these policies are having serious implications for the rest of the planet.

This article was originally published on The Duran.

Shane Quinn obtained an honors journalism degree. He is interested in writing primarily on foreign affairs, having been inspired by authors like Noam Chomsky.