Note to our readers: This article is a satire.

“It is difficult not to write satire.”  Juvenal, Roman poet author of the collection of satirical poems known as the Satires.

As anyone even slightly aware knows, Americans are being inundated with endless Russian and Muslim propaganda aimed at convincing the American people that it is the United States that stands in the way of peace around the world.  Sophisticated and crude in turns, what the psychologists call passive aggressive, these efforts at mind-control can be seen all across the internet.

For years, The Washington Post, always somehow attuned to the latest intelligence, has been sounding the alarm about hundreds of Russian-linked websites aimed at gulling the American public into complacency.  These efforts are about far more than creating fake news, hacking emails, and manipulating our elections.  Everyone knows these have happened as overwhelming evidence has piled up and been repetitively reported by our finest media such as The New York Times, The Washington Post, CNN, etc. They have made it clear that our democracy is at stake from without, ably and seditiously supported from within.  We are under attack.

But the propaganda campaign aimed at Americans of good will has taken a far more sinister turn.  Giving speeches – ostensibly to their own people but really aimed at a U.S. audience – that sound sweet and reasonable is part of their game.  Americans should beware. 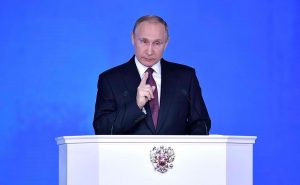 Recently we heard from Vladimir Putin, a statement surely meant to soften the resistance to Russian aggression among well-meaning but easily deluded liberal Americans.  You wouldn’t have heard such cultivated, smooth talk coming from communist leaders in the days of the U.S.S.R. with their blunt desk-thumping threats and ideological frontal assaults lacking in all reason.

Words such as these are meant to appeal to reason and melt the human heart:

Among the many traits the peoples of our two countries have in common, none is stronger than our mutual abhorrence of war. Almost unique among the major world powers, we have never been at war with each other. And no nation in the history of battle ever suffered more than the Soviet Union in the Second World War. At least 20 million lost their lives. Countless millions of homes and families were burned or sacked. A third of the nation’s territory, including two thirds of its industrial base, was turned into a wasteland.

Today, should total war ever break out again – no matter how – our two countries will be the primary target. It is an ironic but accurate fact that the two strongest powers are the two in the most danger of devastation. All we have built, all we have worked for, would be destroyed in the first 24 hours. And even in the Cold War, which brings burdens and dangers to so many countries, including this nation’s closest allies – our two countries bear the heaviest burdens. For we are both devoting massive sums of money to weapons that could be better devoted to combat ignorance, poverty, and disease. We are both caught up in a vicious and dangerous cycle with suspicion on one side breeding suspicion on the other, and new weapons begetting counter-weapons.[i]

But as we all know, Putin has recently told us that Russia has enough nuclear weapons to repel any attack and to destroy the United States many times over.  The strategy: First sweet talk, then the hammer.  Convince us to renounce our weapons and decrease our defense spending, and then – you can guess.

And if there is any further doubt about the Muslim terrorists and their religious fanaticism that would murder women and children, rape and pillage in their maniacal quest for world domination, this religious extract (with excisions for brevity sake) from a so-called holy book should be enough to remind readers that we in the West are the bearers of a sacred responsibility to preserve civilization no matter what the cost against barbaric people who would religiously countenance what follows:

[So, at God’s command] they waged the campaign….put every male to death….took the women captive with their young children, and plundered all their cattle, all their flocks and all their goods.  They set fire to the towns where they lived and all their encampments.  Then, taking all their booty, all that they had captured, man and beast, they took the captives, spoil and booty [to their leader who said] ‘Why have you spared the life of all the women? …. So kill all the male children.  Kill also all the women who have slept with a man.  Spare the lives only of the young girls who have not slept with a man, and take them for yourselves.[ii]

Of course they don’t publicly announce such filth that is written in their scriptures, for to do so would undermine their rhetoric about only defending themselves from attack from outside enemies who are always deemed the aggressors.  For how could they justify such sick talk?

Unless we in the West don’t wake up soon, our enemies from Russia and the Muslim world will gull us asleep, and in our naïve innocence, all we hold sacred will be lost.  It is time to follow the lead of the CIA and their motto engraved on CIA Headquarters: “The Truth Shall Set You Free.”  Our liberty is at stake.

Postscript: “It is difficult not to write satire.”  Juvenal*

Edward Curtin is a writer whose work has appeared widely.  He teaches sociology at Massachusetts College of Liberal Arts. His website is http://edwardcurtin.com/

[i] These are the words of President John F. Kennedy in his profound American University speech of June 10, 1963 in which he called for the end of the Cold War, the abolishment of nuclear weapons, and reconciliation with the Soviet Union.  It is a speech that led to his execution by the U.S. National Security State.  In that speech JFK said, “For, in the final analysis, our most basic common link is that we all inhabit this small planet.  We all breathe the same air.  We all cherish our children’s future.  And we are all mortal.”  In his recent, enlightened speech, Russian President Vladimir Putin used a fine metaphor to say those who are provoking a nuclear war should “stop rocking the boat we are all in and which is called the earth.”

[ii] The holy book here referenced is the Hebrew Bible/Old Testament, Numbers 31, where Moses, following Yahweh’s command, instructs the Jews to finish their military operation against the Midianites and kill all the boys and women and take the girls as their reward.

Posted by Jaime C. on March 5, 2018 in Uncategorized and tagged Opinion.