Reflections on 9/11, Imperialism and U.S War Crimes: Folks Out There Have a “Distaste of Western Civilization and Cultural Values”

This article by the late Professor Edward Herman was among the first articles published by Global Research on September 15, 2001. The article was written in the immediate wake of the 9/11 attacks

One of the most durable features of the U.S. culture is the inability or refusal to recognize U.S. crimes. The media have long been calling for the Japanese and Germans to admit guilt, apologize, and pay reparations. But the idea that this country has committed huge crimes, and that current events such as the World Trade Center and Pentagon attacks may be rooted in responses to those crimes, is close to inadmissible. 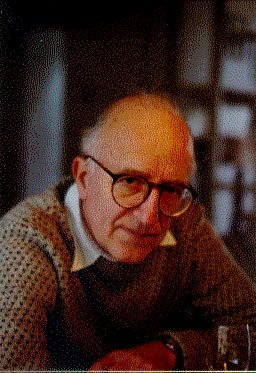 Editorializing on the recent attacks (“The National Defense,” Sept. 12), the New York Times does give a bit of weight to the end of the Cold War and consequent “resurgent of ethnic hatreds,” but that the United States and other NATO powers contributed to that resurgence by their own actions (e.g., helping dismantle the Soviet Union and pressing Russian “reform”; positively encouraging Slovenian and Croatian exit from Yugoslavia and the breakup of that state, and without dealing with the problem of stranded minorities, etc.) is completely unrecognized.

The Times then goes on to blame terrorism on “religious fanaticism…the anger among those left behind by globalization,”and the “distaste of Western civilization and cultural values” among the global dispossessed. The blinders and self-deception in such a statement are truly mind-boggling. As if corporate globalization, pushed by the U.S. government and its closest allies, with the help of the World Trade Organization, World Bank and IMF, had not unleashed a tremendous immiseration process on the Third World, with budget cuts and import devastation of artisans and small farmers. Many of these hundreds of millions of losers are quite aware of the role of the United States in this process. It is the U.S. public who by and large have been kept in the dark.

Vast numbers have also suffered from U.S. policies of supporting rightwing rule and state terrorism, in the interest of combating “nationalistic regimes maintained in large part by appeals to the masses” and threatening to respond to “an increasing popular demand for immediate improvement in the low living standards of the masses,” as fearfully expressed in a 1954 National Security Council report, whose contents were never found to be “news fit to print.” In connection with such policies, in the U.S. sphere of influence a dozen National Security States came into existence in the 1960s and 1970s, and asNoam Chomsky and I reported back in 1979, of 35 countries using torture on an administrative basis in the late 1970s, 26 were clients of the United States. The idea that many of those torture victims and their families, and the families of the thousands of “disappeared” in Latin America in the 1960s through the 1980s, may have harbored some ill-feelings toward the United States remains unthinkable to U.S. commentators.

During the Vietnam war the United States used its enormous military power to try to install in South Vietnam a minority government of U.S. choice, with its military operations based on the knowledge that the people there were the enemy. This country killed millions and left Vietnam (and the rest of Indochina) devastated. A Wall Street Journal report in 1997 estimated that perhaps 500,000 children in Vietnam suffer from serious birth defects resulting from the U.S. use of chemical weapons there. Here again there could be a great many people with well-grounded hostile feelings toward the United States.

The same is true of millions in southern Africa, where the United States supported Savimbi in Angola and carried out a policy of “constructive engagement” with apartheid South Africa as it carried out a huge cross-border terroristic operation against the frontline states in the 1970s and 1980s, with enormous casualties. U.S. support of “our kind of guy” Suharto as he killed and stole at home and in East Timor, and its long warm relation with Philippine dictator Ferdinand Marcos, also may have generated a great deal of hostility toward this country among the numerous victims.

Iranians may remember that the United States installed the Shah as an amenable dictator in 1953, trained his secret services in “methods of interrogation,” and lauded him as he ran his regime of torture; and they surely remember that the United States supported Saddam Hussein all through the 1980s as he carried out his war with them, and turned a blind eye to his use of chemical weapons against the enemy state. Their civilian airliner 655 that was destroyed in 1988, killing 290 people, was downed by a U.S. warship engaged in helping Saddam Hussein fight his war with Iran. Many Iranians may know that the commander of that ship was given a Legion of Merit award in 1990 for his “outstanding service” (but readers of the New York Times would not know this as the paper has never mentioned this high level commendation). 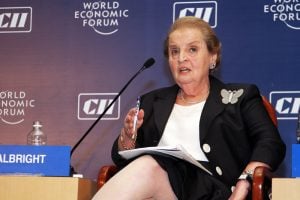 The Iraqis then had their turn. Saddam moved from valued ally in the 1980s, whose use of “weapons of mass destruction” against Iran and the Iraqi Kurds caused no problem at all with his U.S. and British friends, to “another Hitler” upon his invasion of Kuwait in 1990. Suddenly his possession of “weapons of mass destruction” became an extremely urgent matter as the man had demonstrated an inability to follow orders. The war and “sanctions of mass destruction” that followed have killed more than a million Iraqis, and in the well-know words of Madeleine Albright (image: right), questioned on whether the death of 500,000 Iraqi children was justified by the U.S. policy ends, replied, “it is worth it.” No doubt, but an objective observer would recognize that there may be many Iraqis who feel with some justification that the United States is an evil force.

The unbending U.S. backing for Israel as that country has carried out a long-term policy of expropriating Palestinian land in a major ethnic cleansing process, has produced two intifadas– uprisings reflecting the desperation of an oppressed people. But these uprisings and this fight for elementary rights have had no constructive consequences because the United States gives the ethnic cleanser arms, diplomatic protection, and carte blanche as regards policy.

All of these victims may well have a distaste for “Western civilization and cultural values,” but that is because they recognize that these include the ruthless imposition of a neoliberal regime that serves Western transnational corporate interests, along with a willingness to use unlimited force to achieve Western ends.

This is genuine imperialism, sometimes using economic coercion alone, sometimes supplementing it with violence, but with many millions–perhaps even billions–of people “unworthy victims.” The Times editors do not recognize this, or at least do not admit it, because they are spokespersons for an imperialism that is riding high and whose principals are prepared to change its policies. This bodes ill for the future. But it is of great importance right now to stress the fact that imperial terrorism inevitably produces retail terrorist responses; that the urgent need is the curbing of the causal force, which is the rampaging empire.