gallery The Culture of Racism in America

America’s history of racism. Did it influence Nazi Germany

James Q Whitman the Ford Foundation Professor of Comparative and Foreign Law at Yale Law School has written a timely book about American racism and its influence on Adolf Hitler, the Nazi party, and the Nuremberg laws.
The author uses historical facts and documentation to illustrate the connection between the American extermination of Native Americans and the Jim Crow models, namely  the guiding light for Hitler and his Nazi Germany that led to the extermination of millions of Jews, gypsies, and homosexuals.
.
The book links American race laws to the shaping of Nazi policies in Germany.1
. 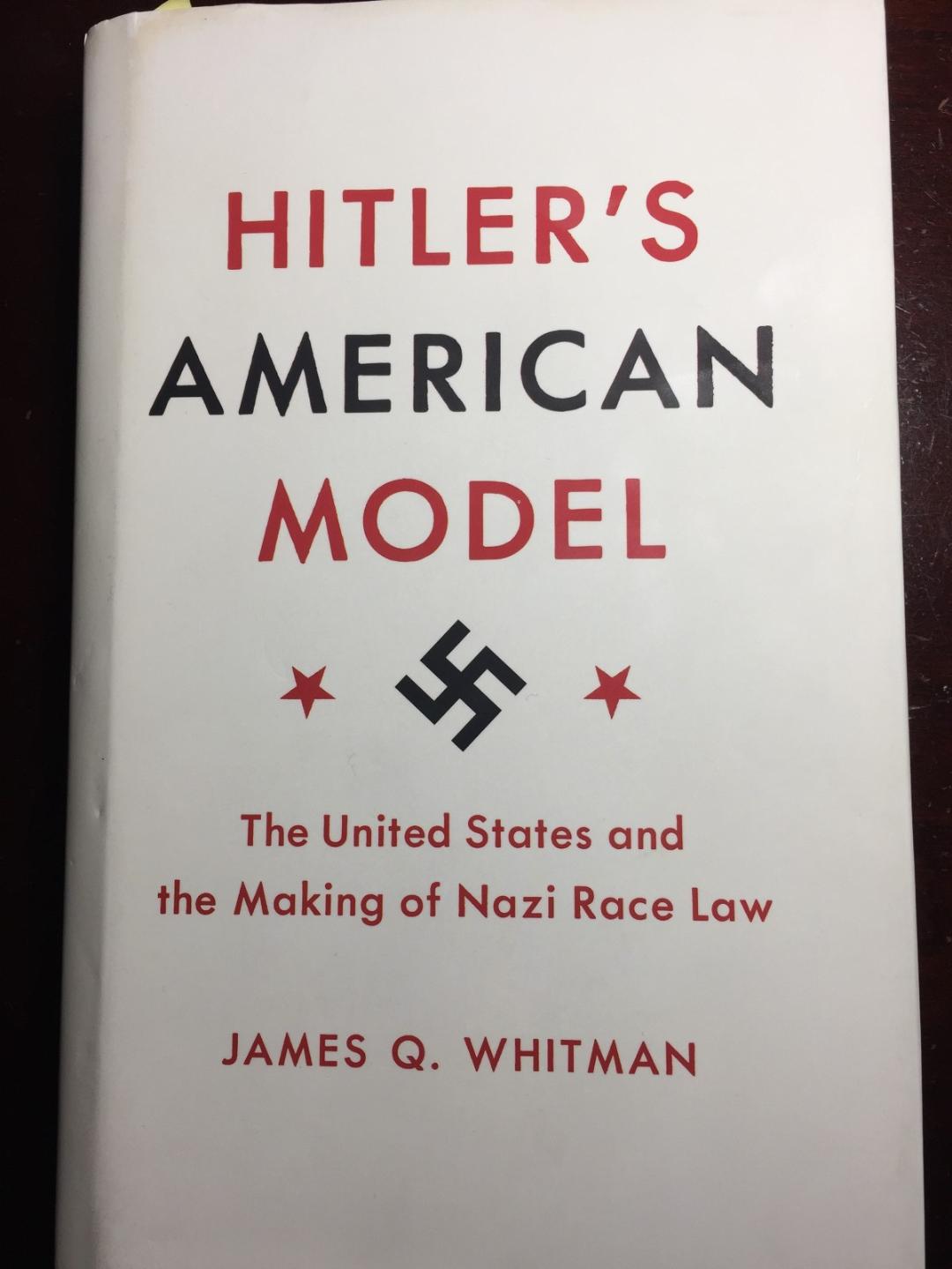 In addition, Whitman states that in the 1930s the United States, as the Nazis frequently noted, stood at the forefront of race-based lawmaking. American immigration and naturalization law, in the shape of series of laws culminating in the Immigration Act of 1924, which conditioned entry in the United States on race-based tables of “national origins.” It was America’s race-based immigration law that Hitler praised in Mein kampf. Furthermore,
.
The United States also stood at the forefront in the creation of forms of de jure and de facto second-class citizenship for blacks, Filipinos, Chinese, and others; this too was of great interest to the Nazi, engaged as they were in creating their own second-class citizenship for Germany’s Jews. As for race mixing between the sexes, stood once again at the forefront there as well. America was a beacon of anti-miscegenation law, with thirty different state regimes-many of them outside the South, and all of them carefully studied, catalogued, and debated by Nazi lawyers.1
.

American racism in the 21st century

.
In the United States, a false view of American identity is perpetuated by the corporate media and the politicians when it is deemed to be politically expedient and convenient. Hence, America is portrayed as a tolerant and kind melting pot. Meanwhile, the duplicitous media and Hollywood remain the number one purveyor of stereotypes, sexism, and racism in their news coverage, as well as in their portrayal of minorities in television shows and movies, despite Hollywood’s public assertions of advocacy for fairness and equality.
.
Thank god for Donald Trump who finally unveiled the hidden truth by addressing the big elephant in the room, and exposing the American lies about equality and liberty in the most racist nation in history. It is no surprise, that demagogues like Mr. Trump would quickly rise on the political ladder as soon as they used the American racist card.
.
Unfortunately, American ideology is immersed and based in deep racist roots. Thus, Trump appeals to the masses’ primitive instincts, and caters to the disgruntled public with the corrupt political system. As a result, he rejuvenates the genuine and raw emotions of racism that tend to impel and motivate people to love him and follow him, as he bluntly proclaims their fantasies, and acts out their rage. Trump elicits in white Americans their authentic racist feelings without shame or reservation. He reignites their sense of entitlement and severe narcissism, as well as their pathological denial of their own genetic mixology and hybridity, that have for centuries plagued the Anglo-American mentality.2
.
Eerily, The Anglo-American Protestants claim racial superiority and ownership over morality through their distorted Christian beliefs.
.
Let’s take for example the white evangelicals in the American South who are comparable to the Wahhabis of Saudi Arabia in their extremist and twisted religious creeds. At the same time, their beloved Southern biblical states are bedeviled with physical and sexual abuse of children and women, chauvinism, racism, hatred, ignorance, misogyny, as well as the highest rate of divorce in America.4
.
Ironically, the American South has the same values as Donald Trump, therefore, their evangelical love affair with him will prove to be fruitful as both Parties experience in their deranged rapture a “folie àdeux” or “mass psychosis.” Moreover, the culture of Anglo-American racism appears to emerge from a culture of narcissism that is fostered by an unquenchable lust for power, domination over others, and a delusional belief of superiority.
.
Finally, Mr. Trump is perfect for America! As a matter of fact, He is America, where the culture of narcissism and the culture of racism converge into one entity and thrive forever after.3 Meanwhile Mr. Trump and his evangelical cohorts will write the new American race laws for the 21st century.
Notes
1. Whitman, James Q (2017). Hitler’s American Model: The United States and the making of nazi race law. Princeton university press (2017)
2.  https://www.globalresearch.ca/the-culture-of-racism-and-the-donald-trump-phenomenon…
3.  https://www.globalresearch.ca/make-america-great-again-the…trumps…/55663804.
4.  https://www.census.gov › … › Releases › Marital Status & Living Arrangements
The original source of this article is Global Research
Copyright © Rev. Richard Skaff, Global Research, 2018