The Western media has casually dispelled the rumors of  political unrest in Saudi Arabia.

There has been virtually no coverage of these unfolding events by the Western media. According to the National (UAE):

Saudi state media dismissed rumours of political unrest in Riyadh on Sunday after unconfirmed reports of clashes and gunfire near the royal palace circulated on social media.

Reuters dismissed the event. No other coverage is provided by the Western media 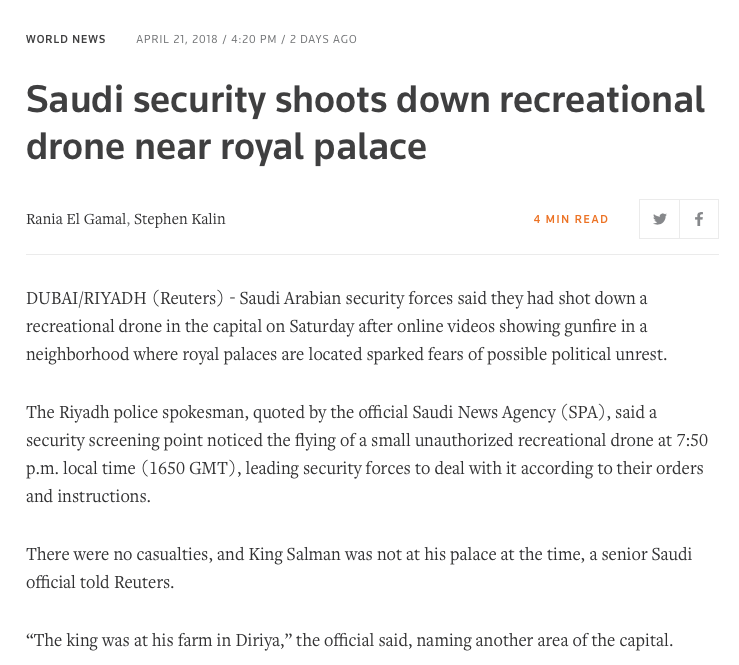 Reports said the king and his son, Crown Prince Mohammed bin Salman, have been evacuated to a bunker at an airbase in the city that is under the protection of the US troops.

While Saudi officials and media are quiet over the incident, there are contradicting reports over the incident. Witnesses and residents of the neighborhoods near the palace said a coup is underway, while other reports said a drone has been flying over the palace.

Saudi opposition members claimed that “a senior ground force officer has led a raid on the palace to kill the king and the crown prince”.

There is yet no report on any possible casualties.

Yet, a number of Saudi activists said in their twitter accounts that a drone has been flying over the palace and the palace guards started spraying bullet at the UAV as they are afraid that it could be a Yemeni military aircraft sent on a bombing mission to the King’s palace.  …

Riyadh’s Police spokesman confirmed the shooting incident minutes ago, claiming that the guards have observed a helishot flying over the Al-Khazami Palace and started shooting at it. (Fars News, April 22, 2017)