Leaders and directors of Brazil’s Workers’ Party (Partido dos Trabalhadores– PT) announced on Tuesday (24) a dedicated commission and the methodology they will use to draft the platform of government for ex-president Luiz Inácio Lula da Silva, who is the party’s presidential candidate in this year’s election.

The group that will coordinate the presidential platform includes former federal minister and ex-mayor of São Paulo Fernando Haddad; the economist and chairman of Perseu Abramo Foundation Marcio Pochmann; and the member of PT’s national board Renato Simões.

According to the party’s chair Gleisi Hoffman, new PT advisors will oversee the coordination team’s work. She also pointed out that the project has been codesigned with experts, social movements, and other actors.

“We are pursuing collaboration with all Brazilian regions, with women, and we want to have a perspective on race as well, so we can have a diversity of views. Brazil’s greatness calls for this,” she said.

According to Pochmann, the backbone of the platform is the fight against extreme poverty and unemployment.

“Tackling these issues requires a plan that can steer Brazil in new directions in terms of its economy, improving employment and income rates by sustaining the country’s domestic market,” he pointed out. 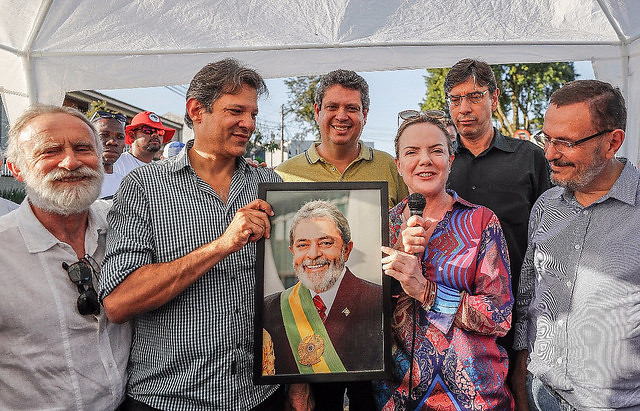 Pochmann said another priority in the platform will be to stop the process of selling off state-owned assets. One of the highlights of the plan is to protect state-owned enterprises, which are now threatened by the growing neoliberalism in the country.

“The platform is being drafted based on the idea that the dismantling of the nation we are witnessing needs to be stopped,” he added.

Haddad said he believes in the Workers’ Party potential to head the country’s government in the next four-year term.

The former mayor of São Paulo highlighted the importance of Lula’s administrations (2003-2006 and 2007-2010) and mentioned how the ex-president is making sure to listen to many different segments of society to devise the platform that should be presented in Brazil’s presidential elections this year. According to Haddad, the basics of the program were conceived by himself, based on conversations with different groups, especially during their tours around the country.

“This requires a lot of political sensitivity, and that’s something that Lula has a lot,” he said.

Renato Simões said the Workers’ Party will promote activities across the country over the next few months to continue to mobilize and listen to the population. He pointed out there will be seven tours around Brazil to discuss topics such as health, education, and the fight against violence, and people’s contributions will be taken into consideration when they start to set up the agenda of proposals.

“This way, as soon as [ex-]president Lula gets out of that cage they’ve put him in, we can once again travel across Brazil and turn him, from an idea, into a platform to promote social change in the country,” he added.

The final draft should be presented to PT’s board in July, when the party will approve the campaign platform and officially announce Lula’s candidacy.