The Secret August 6-9, 2003 “Hiroshima-Nagasaki Commemoration” Meeting at USSTRATCOM to Plan the Production of a New Generation of “More Usable” Nuclear Weapons

The Secret August 6-9, 2003 “Hiroshima-Nagasaki Commemoration” Meeting at USSTRATCOM to Plan the Production of a New Generation of “More Usable” Nuclear Weapons

This article was first published by Global Research on August 14, 2003.

This August [2003], during the very same week that the world commemorated the 58th anniversary of the only use of nuclear weapons—an act which obliterated the cities of Hiroshima and Nagasaki– more than 150 military contractors, scientists from the weapons labs, and other government officials gathered at the headquarters of the US Strategic Command in Omaha, Nebraska to plot and plan for the possibility of “full-scale nuclear war” calling for the production of a new generation of nuclear weapons—more “usable” so-called “mini-nukes and earth penetrating “bunker busters” armed with atomic warheads. Plans are afoot to start a new bomb factory to replace the one closed at Rocky Flats, now one of the most polluted spots on earth thanks to earlier production of plutonium triggers for the US hydrogen bomb arsenal, halted after the end of the Cold War.

And there is a move to shorten the time to restart nuclear testing at the Nevada test site as well as to lift the restrictions that were placed on the production of “mini-nukes” by Congress.

How did we get to this awful state, with North Korea and Iran threatening nuclear break-out and even Japan now talking about developing nuclear weapons of its own? What action can ordinary citizens take to end the nuclear madness and provide for real national security? 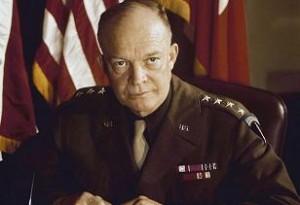 President Eisenhower (image on the right), in his farewell address to the nation, is often remembered for warning us to guard against dangers to our “liberties and democratic processes” from the “military-industrial” complex. But equally telling, and not as well-known, he also warned us against the “danger that public policy could itself become the captive of a scientific technological elite”, noting that the “prospect of domination of the nation’s scholars by Federal employment, project allocations, and the power of money is ever present and is gravely to be regarded. “

The fact is, our Doctor Strangeloves have been driving this nuclear arms race in partnership with military contractors engaged in pork barrel politics with a corrupt Congress, spreading nuclear production contracts around the country to the great detriment of our national health, and security. From the first time we thought we were able to put some limits on nuclear development, when the Limited Test Ban Treaty was negotiated in 1963 because of the shock and horror at the amount of radioactive strontium-90 in our baby’s teeth, the labs made sure there was continued funding to enable testing to go underground. And when Clinton signed the Comprehensive Test Ban Treaty in 1996 to cut off nuclear testing, he bought off the labs with a $4.6 billion annual program—the so-called “stockpile stewardship “ program– in which nuclear testing was now done in computer simulated virtual reality with the help of so-called “sub-critical tests”, 1,000 feet below the desert floor, where plutonium is blown up with chemicals without causing a chain reaction. This program created a vast loophole in the not-so-comprehensive Comprehensive Test Ban Treaty. It is the fruits of this Faustian bargain that produced the research for the new nukes Bush is now prepared to put into production.

What’s to be done?

Although the majority of the Congress, Democrats and Republicans alike, and most of the media keep stirring the pot with scare stories about nuclear proliferation from so called “rogue” states, we hardly hear about the essential bargain of the Non-Proliferation Treaty (NPT), signed in 1970, which has kept the lid on the spread of nuclear weapons until very recently. The NPT is a two-way street. It was a deal, not only for non-nuclear weapon states not to acquire nuclear weapons, but also for the nuclear weapons states to give them up in return. India and Pakistan never signed the treaty, as it elevated the privileges of the then five existing nuclear weapons states—US, USSR, UK, France and China. And while India had tested in 1974 for its own nuclear arsenal, it wasn’t until 1998, after the Comprehensive Test Ban Treaty was signed over its objections, that India broke out of the pack, swiftly followed by Pakistan. Under Bush, annual funding for the weapons labs went from $4.6 billion under Clinton to $6.4 billion—an obvious recipe for proliferation. Because we cling to our nuclear weapons despite our treaty obligations to eliminate them, other nations attempt to acquire them. Furthermore, our determination to “dominate and control the military use of space”, threatening the whole world from the heavens, is another incentive to less powerful nations to make sure they have the only equalizer that can hold us at bay—nukes of their own. In August, Russia, for the first time joined China at the UN disarmament talks in Geneva, calling for a treaty to prevent the weaponization of space. To eliminate the nuclear threat, we need to close down our military space program, close the Nevada test site, put the weapons designers out to pasture and begin negotiations on a treaty to ban nuclear arms.

Call your Senators and Members of Congress at 202-224-3121 and ask them to shut the test site, close down the weapons labs, and begin negotiations to ban the bomb on land and sea and in the heavens.