gallery Trump, the NRA, Mass Shootings and the American Culture of Death

“A fish rots from the head down.” —Ancient proverb of disputed origin

Another week has come and gone, and with it, another mass shooting. The American culture of death marches on, fueled by our obscene stockpiles of lethal weaponry and stoked by the divisions, alienation, hatred and fear that have come to define us as a nation.

As I wrote in my column after the 2012 Sandy Hook massacre, we are in the grips of a self-destructive social and psychological disorder—a Hobbesian “war of all against all”—that has long festered. Far from improving since then, the disorder has metastasized to new levels under the leadership of our 45th president.

The latest outrage took place early Friday morning at a high school in Santa Fe, Texas, a rural community of just over 12,000 about 20 miles northwest of Galveston.

The perpetrator has been identified as Dimitrios Pagourtzis (image below), a 17-year-old student, who used a shotgun and a .38 revolver belonging to his father to shoot 10 people dead—eight fellow pupils and two teachers—and wound at least 10 more. Pagourtzis is being held without bail on charges of capital murder. In all likelihood, in the “hang ’em high” Lone Star State, he’ll be tried as an adult and given the death penalty. 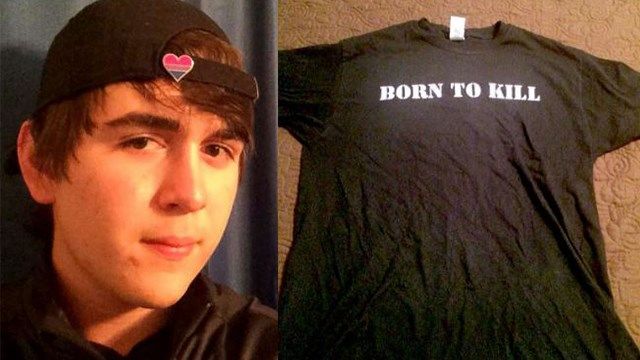 Described by classmates as a quiet loner who had been subjected to persistent bullying, Pagourtzis was carrying a duffel bag and wearing a long black trench coat and combat boots, despite the 88-degree temperature outside, when he entered an art class and opened fire. His Facebook page, investigators learned shortly after the incident, contained photos of a custom-made T-shirt printed with the words “Born to Kill,” along with photos of a duster jacket adorned with Nazi military medallions and an Iron Cross. According to some accounts, he was wearing the shirt at the time of the shooting.

In addition to seizing the firearms Pagourtzis used, police reportedly have found improvised explosive devices on campus and in surrounding areas. Authorities have interviewed, but apparently not charged, two other students as persons of interest or possible accomplices.

Within hours of the shooting, President Trump sent his official condolences to the people of Santa Fe. Speaking at a prison-reform conference at the White House, he assured the community:

“We grieve for the terrible loss of life and send our support and love to everyone affected by this absolutely horrific attack. To the students, families, teachers and personnel at Santa Fe High: We’re with you in this tragic hour and we will be with you forever.”

On Friday afternoon, Trump ordered flags at federal facilities to be flown at half-staff. Still later in the day, he announced that his school safety commission would reconvene. The commission, which is led by Education Secretary Betsy DeVos and includes Attorney General Jeff Sessions but has no rank-and-file teachers or students, was set up after the murders in February at Marjory Stoneman Douglas High School in Parkland, Fla.

We’ve been here before, all of us in one way or another. We’ve witnessed the carnage, either as survivors ourselves or as friends or relatives of the fallen, or just from afar as spectators watching images of blood and grief on television and social media. We’ve heard the heartfelt prayers and the feckless clichés from political figures pledging solidarity, support and vague promises of action. Over and over again.

Worse, we all know that nothing constructive will come from Trump’s safety commission. After Parkland, the best the commission could offer was the arming of teachers. In the meantime, we’ve come to embrace mass shootings as routine features of everyday life.

Mass shootings are defined broadly as crimes with at least four victims, whether killed or wounded. Delineated thusly, the slaughter in Santa Fe is the 101st event of its kind this year. As one Santa Fe student told a local ABC news reporter in an interview Friday, she wasn’t at all shocked that one had erupted at her school.

“It’s been happening everywhere,” the student said. “I’ve always kind of felt like eventually it was going to happen here too.”

The student’s grim fatalism, sadly, is grounded in fact. We are awash in an ocean of firearms and killers armed to the teeth.

In a purely empirical sense, America’s obsession with guns and gun violence is easy to chart, as CNN did in an online article that was first posted in October 2017 and updated in March, not long after the Parkland shootings. Among other findings the network summarized were the following:

Guns are also a big business in the U.S. The annual revenue of gun and ammunition manufacturers tops $13 billion a year, and gun stores rake in $3 billion. In 2013, according to the Bureau of Alcohol, Tobacco, Firearms and Explosives, nearly 11 million pistols, revolvers, rifles and shotguns were sold across the country.

The surge in sales and profits has been accompanied by stepped-up political spending by gun industry lobbyists, particularly the National Rifle Association. According to the Center for Responsive Politics, Federal Election Commission records show that the PAC and nonprofit arms of the NRA spent a combined $54.4 million in the 2016 elections. A cool $30 million was directed to supporting Trump’s presidential bid.

The NRA has also spent millions more to defeat even modest legislative proposals aimed at restoring the assault weapons ban: bolstering the federal background-check system and applying the system to gun shows and private sales; limiting the sale of large-capacity magazines; outlawing straw purchases (in which a nominal buyer poses for an ineligible end user); restricting the number of guns that any single person can buy in a given time period; and ensuring the availability of mental health counseling for all Americans.

It’s tempting to think of Trump, a businessman of expediency and self-aggrandizement, as the NRA’s tool, happy to do the gun lobby’s bidding in exchange for buckets of campaign cash. Tempting but wrong.

In the NRA, Trump has found the perfect vehicle for the culture of death that helped propel him to office. The NRA is as much his tool as he is theirs.

What is that culture? In a 2013 column on gun control titled “Mass Violence, Gun Control and the American Culture of Death,” I quoted Rich Broderick, an unheralded journalist based in Minnesota, who described it well before Trump’s election as a “culture that embraces a soulless free-market idolatry in which the value of everything, including human beings, is determined by the bottom line. … It is a culture of death that prevails on Wall Street, K-Street, Hollywood, and our ever-expanding Military-Industrial-Congressional Complex.”

In the aftermath of Trump’s ascension, others have taken the metaphor further. In a column posted by Truthout in early March this year, the American and Canadian scholar Henry Giroux wrote:

“We live in an age in which the politics of disposability has merged with what [CounterPunch editor] Jeffrey St. Clair has called the spectacle of ‘American Carnage.’ The machineries of social death and misery now drive a mode of casino capitalism in which more and more people are considered waste, expendable and excess. The politics of disposability now couples with acts of extreme violence as pressure grows to exclude more and more people from the zones of visibility, justice and compassion. This is especially true for children. Violence against children in the United States has reached epidemic proportions.”

“Whatever else Trumpism may be, it is the systematic organization of resentment against outgroups. Trump’s record is rich in dehumanization. It was evident when he called Mexican migrants ‘criminals’ and ‘rapists.’ When he claimed legal mistreatment from a judge because ‘he’s a Mexican.’ (Judge Gonzalo P. Curiel was born in Indiana.) When he proposed a ‘total and complete shutdown of Muslims entering the United States.’ When he attacked Muslim Gold Star parents. When he sidestepped opportunities to criticize former Ku Klux Klan leader David Duke. When he referred to ‘very fine people’ among the white-supremacist protesters in Charlottesville. When he expressed a preference for Norwegian immigrants above those from nonwhite ‘shithole countries.’ ”

This does not imply, of course, that the NRA or Trump can be held criminally responsible for the acts of Dimitrios Pagourtzis or any other mass shooter. Still, it implies something of nearly equal weight: Trump and the NRA have combined to put fear and dehumanization into the hearts and minds of Americans, and fear and dehumanization sustain a fertile environment for continued outbreaks of mass violence.

If we are ever to heal our culture of death, at a minimum, we have to dislodge both the NRA and Trump from the pinnacles of power they now occupy. As the old saying goes, “A fish rots from the head down.”

Bill Blum is a former judge and death penalty defense attorney. He is the author of three legal thrillers published by Penguin/Putnam.

The original source of this article is Truthdig
Copyright © Bill Blum, Truthdig, 2018