A Canadian doctor who was shot by Israeli forces last month during protests in the Gaza Strip has taken his fight for health-care access for Palestinians to Ottawa, the Canadian capital.

Dr Tarek Loubani is asking the Canadian government for $15m Canadian ($11m) to help expand a longstanding project that aims to bring 24-hour electricity to medical facilities in the besieged coastal enclave.

The renewable energy project, known as EmpowerGAZA, involves installing solar panels on the rooftops of hospitals and medical clinics.

So far, three hospitals in Gaza have been equipped with solar panels.

The $11m investment would pay for the installation of solar panels on about nine other hospitals, as well as 50 medical clinics, explained Loubani, an emergency physician based in London, Ontario.

Loubani met with Prime Minister Justin Trudeau earlier this week in Ottawa, as well as several parliament members from all the major political parties, all of whom welcomed the idea, he said.

“I was very happy to see the general Canadian mood – that the health concerns of Palestinians in Gaza have to be taken seriously – reflected in their representatives from all parties,” he told Middle East Eye in a telephone interview.

“I think all the parties agree that we have to do something about the desperate health conditions that currently exist in Gaza,” he said. 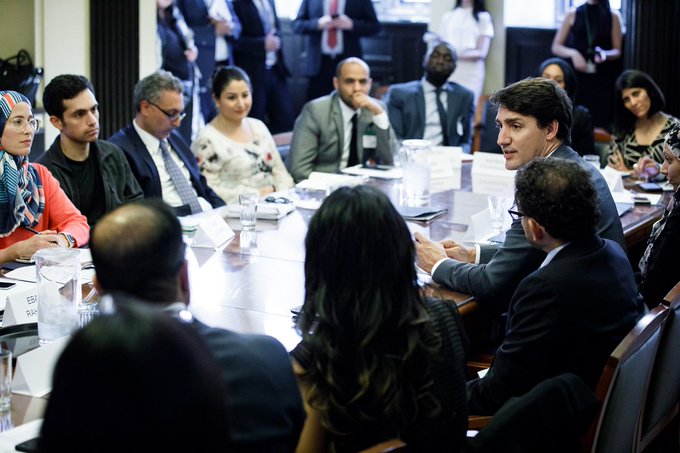 The image, tweeted by the prime minister’s office, shows Trudeau sitting directly across from Loubani, at a meeting earlier this week.

The prime minister’s office redirected MEE to the ministry of international development.

Louis Belanger, director of communications in that ministry, said the department was “not currently in a position to comment specifically on Dr Loubani’s proposed project”.

“We salute the humanitarian work that Dr Loubani has done in Africa and the Middle East, especially today as we mark World Refugee Day,” Belanger told MEE in an email.

He said Canada “remains deeply concerned” about the humanitarian needs of Palestinians, and acknowledges that “the limited supply of electricity exacerbates the situation”.

She urged “the Canadian government to fund this initiative, which will save lives in #Gaza”.

Gaza’s health-care network has been on the brink of collapse for several years, with frequent electricity cuts limiting available services and a shortage of medical supplies resulting from a strict blockade on the territory imposed by Israel and supported by Egypt.

In that context, providing reliable electricity to medical facilities is critical.

So far, solar panels have been installed at Beit Hanoun Hospital and the Indonesia Hospital, both in Beit Hanoun, and at al-Aqsa Hospital in Deir al-Balah, after an online fundraising campaign garnered more than $215,000 in 2015.

The steady flow of electricity has allowed patients at each facility to benefit from “the most essential, life-saving” care, Loubani said.

“In these three hospitals, Palestinian patients never have to worry about whether or not there’s going to be a cut in power in the intensive care unit, in the operating rooms or for the dialysis units,” he said.

If there’s electricity left over after these essential services are met, it goes to power the hospitals’ emergency rooms.

The project’s effects go beyond direct medical care, however.

Knowing their local hospitals will be able to respond to their needs – and importantly, that they won’t be sent away amid a lack of power – also provides Palestinian patients in Gaza with a sense of relief.

“They know that whenever they come to this hospital, it’s always working. They know that they can always receive care and doctors [w]on’t send them away,” Loubani said.

Loubani acknowledged that the Israeli blockade makes it challenging to get the necessary equipment into Gaza to instal the solar panel systems.

Still, the difficulties don’t “make [the project] any less worthwhile”, he said.

There is no timeframe yet for Canada’s possible investment, but Loubani said he’s hopeful Ottawa will come through.

“There is currently an unfolding health disaster in Gaza and as a doctor that is my primary interest,” he said.

“This is so clearly a humanitarian project, that I can’t imagine anybody objecting.”

Featured image is from Democracy Now!