Militarization of the African Continent: The U.S. Is Building a Massive $110 Million Drone Base in the Sahara

Right outside of Agadez, Niger, in the scrublands of the Sahara, the U.S. airforce is building a massive 2,200-acre drone base, costing $110 million according to the Associated Press. The base should be completed in the next couple of month but as you can imagine, building an airfield in the desert tends to be very complicated. The project already is over $22 million budget and delayed by one year. The new drone base will [allegedly] be used to target extremists deep into West and North Africa, regions that are currently hard to reach with drones.

[Combating Extremism is the stated objective. Terrorism is the Justification  for the Militarization of Africa, GR Editor]

Back in 2013, President Obama had ordered a drone base to be built in the capital of Niger, Niamey, but even than military officials already indicated that ideally, they wanted the drone operation to be based outside of Agadez. The NY Times reported moving the drone base to Agadez had two main advantages. First, it is better positioned to launch drone operation throughout the southern regions of the Sahara that are turning into an alleged “terrorist hotbed”. Second, the drone operations are better shielded from prying eyes in isolated Agadez than in Niamey. A third reason, not mentioned by the NYT might well be that with the fall of Libyan leader Gaddafi, Agadez has turned into the smuggling capital of Africa, according to Politico Europe.

In the NYT, P.W. Singer, a strategist, and drone specialist at New America in Washington said that:

“The base, and the more frequent flights that its opening will allow, will give us far more situational awareness and intelligence on a region that has been a hub of illicit and extremist activity, but it will also further involve us in yet more operations and fights that few Americans are even aware our military is in.”

The quote highlights the shadowy character of the American drone operations. Many of the drone bases are situated in remote areas with questionable authorities and very little oversight, such as Yemen, Somalia and now Niger. 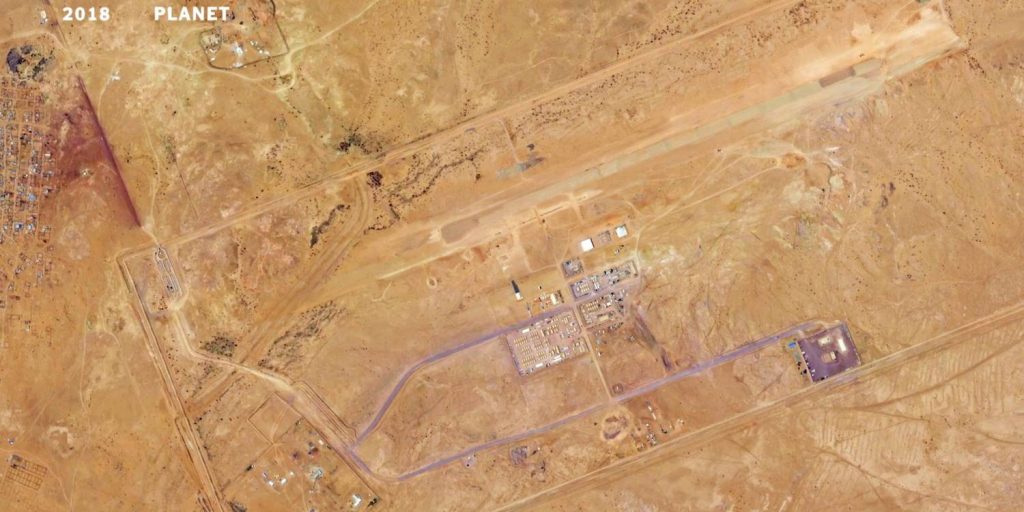 Building the drone base has proven to be quite the challenge. Dust storms hamper the work as well as temperatures that frequently sore to over 100 degrees Fahrenheit, resulting in a lot of the work being done at night.

The drone base, costing $110 million, features a runway that is 6,800 feet long and 150 feet wide as it not only needs to accommodate drones such as the MQ-9 Reaper, but also the much heavier C-17 cargo planes.

The MQ-9 Reaper is one of the most advanced drones available to the U.S. Airforce. The unmanned aerial device is built by General Atomics and has a range of 1,150 miles. It is able to gather intelligence and provide strike support with an impressive array of weapons, such as the laser-guided GBU-12 Paveway II bomb, up to four Hellfire air-to-ground missiles, the AIM-9 Sidewinder and more.

In this video you can see three hangars being built, each of which can house one or more drones. Citing security reasons, military officials have declined to say how many drones will be stationed at the drone base, as reported by Military.com.

“The deployment of armed drones is not going to make a strategic difference and may even increase local hostility to the U.S. and the central government in distant Niamey.”

Haye Kesteloo is the Editor in Chief and Main Writer at DroneDJ, where he covers all drone related news and writes product reviews. He also contributes to the other sites in the 9to5Mac group such as; 9to5Mac, 9to5Google, 9to5Toys and Electrek. Haye can be reached at haye@dronedj.com or @hayekesteloo

Featured image is a screenshot from a video from NYC via DroneDJ.

The original source of this article is DroneDJ
Copyright © Haye Kesteloo, DroneDJ, 2018