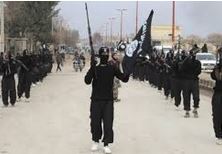 August 17, 2018 “Information Clearing House” –  The U.S. aim in Syria is still ‘regime change’. The Pentagon has made it clear that it wants to stay in the country even after the Islamic State vanished. A little propaganda trick is now used to create a justification for its continuing occupation.

The report by the UN Security Council’s Sanctions Monitoring Team on ISIS, in parts discussed here, includes a number that smells of bullshit and manipulation:

3. Some Member States estimate the total current ISIL membership in Iraq and the Syrian Arab Republic to be between 20,000 and 30,000 individuals, roughly equally distributed between the two countries. Among these is still a significant component of the many thousands of active foreign terrorist fighters.2

The high number given by a “Member State” exceed all prior assessments. The original strength of ISIS was estimated as a few thousand  and it swelled as it took more land and incorporated local auxiliary forces and newly arriving foreign fighters. In September 2014, when ISIS was near its peak, the CIA estimated a total of 31,000 ISIS fighters in Syria and Iraq. The number shrank as ISIS was kicked out of more places it earlier occupied while it lost ten thousands of its fighters to Russian, Syrian, Iraqi and U.S. bombs, artillery and other military means. In July 2017 the commanding general of U.S. Special Forces said that 60 to 70,000 ISIS fighters had been killed.

As far as the numbers, there’s — there’s been some numbers thrown out there over the past few months. You’ve heard the previous spokesmen range from 1,000 to 3,000. You’ve seen a lot of subject matter experts say something like that. I have nothing to add to that. What I will say is one ISIS fighter is one too many, and that’s what we’re pursuing. We’re pursuing their defeat.The numbers in the UN Sanctions Monitor report simply make no logical sense. It is also contradicted by earlier estimates that put the number of current ISIS fighters in the low thousands. In December 2017 President Trumpclaimed that only “1,000 or so” fighters remained in Iraq and Syria. In a June 5 Pentagon press conference the spokesman was asked about the number of ISIS fighters left in Syria. He responded:

But there must of course be a reason why “some Member States” would give the UN Monitor team such an absurdly high number.

The U.S. is justifying its occupation of north-east Syria by claiming to fight ISIS under the legal cover of two UN Security Council resolutions. Now, as ISIS in Syria has shrunk to a few dozens of fighters, that justification is wearing thin. It is immensely important for the Pentagon to present a high number, as ISIS is its only legal justification to stay in Syria. It is doubtful that Congress would agree to a prolonged occupation if ISIS vanished.

This trick was extensively used in the run up to the war on Iraq. Scooter Libby, the chief of staff of Vice President Dick Cheney, would call up pliant journalists, Judith Miller of the New York Times comes to mind, and tell them about a “top secret” assessment that Iraq bought aluminum tubes to build centrifuges for Uranium enrichment. (Experts knew that Iraq bought these tubes to make military mortars.) But the New York Timesprinted the ‘nuclear’ nonsense on page one of its Sunday edition. A few hours later Dick Cheney and other Bush administration members appeared on the Sunday morning talk shows and confirmed the story they had planted.

The tale of the ‘nuclear’ aluminum tubes was then perceived to have come from two independent entities and sources, the New York Times, and Vice President Cheney and other members of the Bush administration. It was thus widely believed.

We now see a similar scheme. A dubious fact, coming from a single source, is depicted as being multi-sourced. Another pliant journalist, this time Liz Sly of the Washington Post, is used to spread the fake news:

The Islamic State may still have in excess of 30,000 fighters in Syria and Iraq and appears to have rebounded from some of its worst setbacks, according to two new reports that call into question whether the militants are as close to defeat as the U.S. military has suggested.
…The U.S. government report attributed its numbers to the Defense Department but acknowledged that such estimates “have varied sharply among sources and over time.” The report was delivered to Congress by the Lead Inspector General, an office created in 2013 to oversee the U.S. military’s operations overseas against the Islamic State. Quoting Defense Department officials, the report put the number of fighters in Iraq at between 15,500 and 17,100 and in Syria at 14,000.

The second report was written by the U.N. Analytical Support and Sanctions Monitoring Team, which monitors the impact of U.N. sanctions, and offered a similar figure. Quoting unnamed member states, it said there are believed to be between 20,000 and 30,000 Islamic State fighters across Iraq and Syria, divided roughly equally between the two countries.

The DoD estimated that 15,500 to 17,100 ISIS fighters remained in Iraq, although estimates of the numbers of ISIS fighters have varied sharply among sources and over time. … 5
…
[B]y the end of the [2nd] quarter, ISIS was estimated to still control about 5 percent of Syria and to have roughly 14,000 fighters in the country, although estimates of ISIS force strength vary greatly depending on the source. 38

The footnote gives as sources:

The Inspector General is just repeating numbers the Department of Defense claims. A writeup on the IG report by AL-Monitor says that these numbers come from the Defense Intelligence Agency. It does not give any source for that claim.

The numbers in the UN Sanction Monitor team report are sourced to a “Member State” which is most likely the United States. It is the only one that operates against ISIS in Iraq and Syria. The numbers in its report are astonishing similar to the numbers the Department of Defense gave to the Lead Inspector General. Both reports were published in the same week.

It is extremely likely that these numbers comes from the very same source, the Defense Intelligence Agency or someone else in the Pentagon who pulled it from Secretary Mattis’ ass. It is well known that Mattis wants the U.S. to stay in Syria as long as possible to eventually achieve regime change by ‘diplomatic’ pressure means:

In Syria, “We do not want to simply pull out before the diplomats have won the peace,” Mattis said. “You win the fight, and then you win the peace.”

The Washington Post now sells these numbers, which contradict all numbers the Pentagon has previously given, as coming from “two new reports”, when it is pretty obvious that they come from a single source.

Some Post readers will see it as ‘confirmed’ information even though it is likely a wild ass guestimate which is based more on Mattis’ wishes and intent than on logical thought or analytical rigor.

The U.S. is expanding its military infrastructure and personal in Syria despite the ever shrinking ground ISIS holds:

[T]he last hours witnessed the entry of more than 250 trucks carrying weapons, equipment, armored vehicles and machinery to areas controlled by the Syria Democratic Forces, where these shipments came from the Syrian-Iraqi border and headed to the military bases of the United States and the western forces in several areas east of Euphrates River, and the entry of more arms shipments comes after entering large quantities of similar shipments to the same areas during the past days and weeks, in addition to expanding the Coalition’s military bases in the area.

It will only take days until the freshly planted, confirmed but fake ISIS number will be cited as justification for these moves.