From the moment that she came to public attention Aretha Franklinappeared to be an anointed figure, elevated to a pantheon of greats that include Bessie Smith, Ma Rainey, Billie Holliday and Sister Rosetta Tharpe. Songs such as Respect, Natural Woman and I Say A Little Prayer testify to the power of her artistry.

Like Ray Charles and Sam Cooke -the key progenitors in transforming Gospel music into Soul music- she succeeded in working out an innovative hybrid of Black American music styles. But unlike Charles and Cooke, she was able to return to her gospel roots and receive popular and critical acclaim in 1972 by creating the seminal Amazing Grace, the highest selling album of her life, and the greatest selling live gospel album of all time.

She showed great versatility by recording songs for a cross-over audience such as her remake of Ben E. King’s Spanish Harlem and for the Disco-Funk era offered the classic Jump to It in 1982. 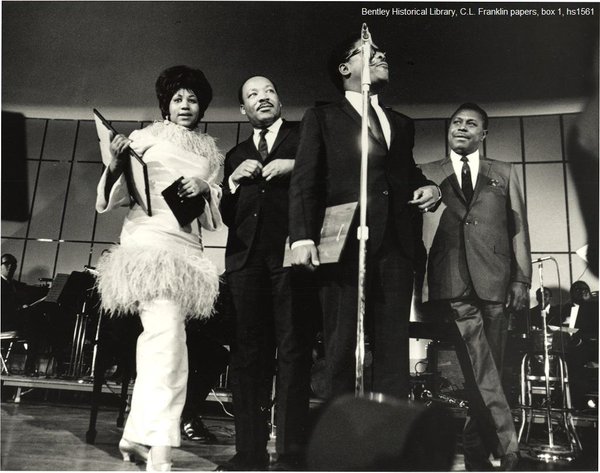 False Flags and Regime Change in Ukraine: Why We Still Don’t Know What Happened to Flight MH17

Aretha Franklin with her father and Martin Luther King

An indicator of her significance in popular music was the fact that like Elvis Presley, she became one of the few artists to be known by first name alone. As a celebrity stories of her marriages, weight battles as well as her loss of innocence at an early age under the parental regime of her father, the Reverend C.L. Franklin became the staple of news magazine gossip and book revelations.

It is true to say that she reflected the era that she lived in. Her afros spoke to the ‘Black Pride’ movement and her songs about freedom and respect attested to her commitment to the Women’s Liberation and Civil Rights movements. She helped finance several civil rights programmes and participated in fundraisers. Of her willingness to post bail for Angela Davis, the black, feminist radical in 1970, Franklin said the following:

Jail is hell to be in. I’m going to see her free if there is any justice in our courts, not because I believe in communism but because she’s a black woman and she wants freedom for black people.

The wealth of connections provided by her father meant that she had known the Reverend Martin Luther King since she was a young girl and he presented her with an award in Detroit only shortly before his assassination in 1968.

As a singer, Franklin was seemingly always on a pedestal and remained there until her death. Needless to say that she was the quintessential soul and gospel singer. She was, is and will be the standard by which serious singers will be appraised and defined.

Aretha Franklin was born on March 25th 1942 in Memphis, Tennessee and died on August 16th 2018 in Detroit, Michigan.

This article was originally published on the author’s blog site.

Adeyinka Makinde is a writer based in London, England. He is a frequent contributor to Global Research.