Featured image: A view of the Gran Chaco as it naturally appears in Paraguay. Photo by Ilosuna licensed under the Creative Commons Attribution 1.0 Generic license.

The Gran Chaco ecosystem is in trouble, though the threats to this biodiverse region have been little publicized. This vast semi-arid subtropical plain covers 1.28 million square kilometers (494,210 square miles) and encompasses parts of Argentina, Paraguay, Bolivia and a tiny portion of Brazil.

It is home to an estimated 3,400 plant species, 500 birds, 150 mammals and 220 reptiles and amphibians, as well as threatened wildlife including jaguars, giant anteaters, the Southern Three-banded Armadillo (Tolypeutes matacus), and the Endangered Chaco Side-necked turtle (Acanthochelys pallidipectoris).

Bounded to the west by the Andes Mountains, and to the east by the Brazilian Plateau, this immense plain was once covered in grasslands, wet palm savannahs, upland and dry thorn forest. But soy producers and global commodities traders recently moved in, bringing massive deforestation, and destroying the rich biodiversity and ways of life of local indigenous peoples. 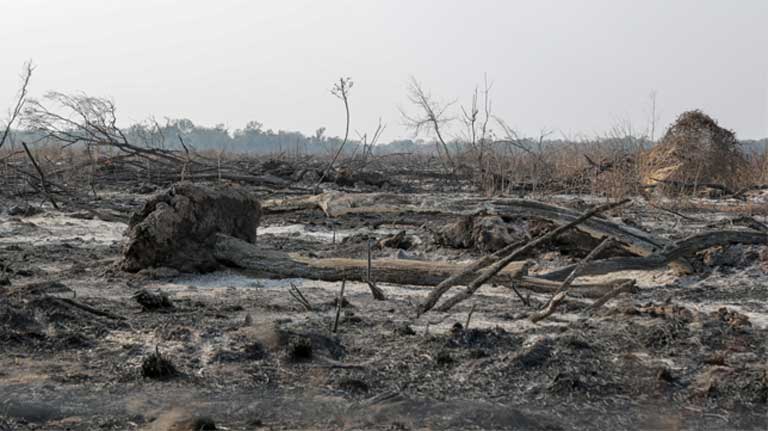 Much of the soy grown in the Gran Chaco — a word that means vast “hunting territory” in the Quechua indigenous language — is destined for the European market, the second biggest global consumer of the oily bean after China.

The European Union (EU) imports 97 percent of the soy it consumes. In 2016, it bought 46.8 million tons in total, with 27.8 million tons, or 59.4 percent, imported from South America, according to the English think tank Chatham House. The figures for 2017 are not yet available.

Last year, a team from Mighty Earth, an environmental NGO, traveled 4,200 kilometers (more than 2,600 miles) through the Argentinean and Paraguayan Gran Chaco to determine “how soy raised for European animal feed drives deforestation in two of the leading South American soy-producing countries.”

Their overall finding is summarized in the title of their recent report “The Avoidable Crisis.” The NGO’s analysis shows that the Gran Chaco needn’t be sacrificed for the sake of industrial agribusiness or to feed European poultry. Rather, much of the remaining native vegetation could be protected with less than a million dollar investment, according to Mighty Earth.

The Bolivian Gran Chaco and the Brazilian Cerrado were the subject of previous research by the Washington, D.C.-based Mighty Earth, with findings published in February 2017 in a report called the “Ultimate Mystery Meat.” That document identified deforestation and cleared land totaling 697,592 hectares (2,693 square miles) in the Brazilian Cerrado between 2011 and 2015 associated with the transnational trading companies Bunge and Cargill. In Bolivia’s Gran Chaco, 289,000 hectares (1,115 square miles) were deforested on average per year between 2010 and 2015, according to the UN’s Food and Agriculture Organization (FAO). Cargill and Archer Daniels Midland (ADM) are the most active traders in that country.

The NGO’s reports identify transnational commodities firms as the key drivers of deforestation in these regions:

“In addition to their role in trade, these companies also play a more direct role in driving ecosystem conversion by providing [soy] plantation owners with financing, fertilizer, infrastructure, and other incentives for new deforestation to expand their supply base.”

“Very little attention has been given to areas such as the Gran Chaco. Without public scrutiny, many of the same companies that have committed to protecting the forest and respecting human rights in the Amazon are operating in the Gran Chaco without safeguarding local communities or wildlife.” 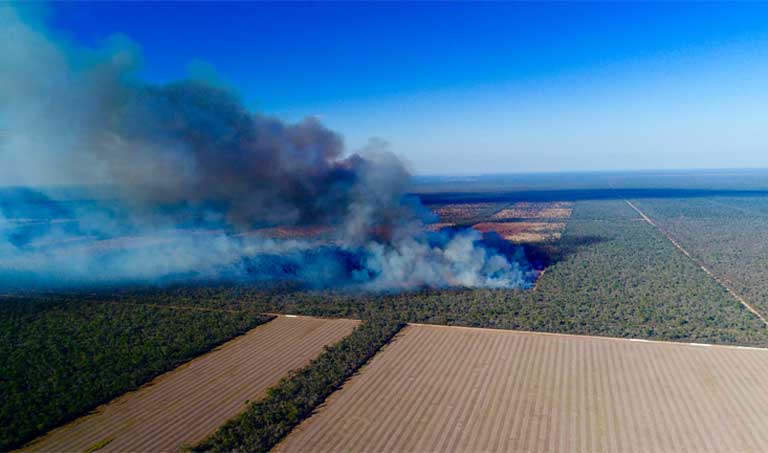 In the foreground, land in Argentina cleared for a soy plantation; in the background, more forest burns to make way for more soy, for which there is a tremendous global demand. Image by Jim Wickens, Ecostorm via Mighty Earth.

An EU supply chain with deforestation as its first link

Yousefi said that Mighty Earth is in dialogue with some of the traders mentioned in the report (which also include Wilmar International and the Louis Dreyfus Company), and has written letters to major marketing companies in Germany and France, but noted that most of these firms have not been proactive in preventing deforestation.

“Although many state that they have sustainability policies for their soy, most fail to be able to even track where it comes from,” she added.

The soy grown in the Gran Chaco and Cerrado doesn’t flow directly into the bellies of European consumers, she explained.

“While the chickens, pigs, and cows that [producers] sell are normally raised in Europe, the feed consumed by the livestock often comes from thousands of miles away [in South America]. As such, the locally grown labeling [on EU pork, beef and chicken] only represents half the truth about the origins of this meat.”

This is the case with the English retailer Marks & Spencer, among others, who have a history of buying EU grown meats fed on foreign soy. The company’s food department attests on its website:

“From corned beef to fillet steak, every single piece of beef that M&S sells has two things in common – it can be traced back to the farm and animal it came from AND it is British.”

English fast food restaurants and grocery chains, including Tesco, Morrisons and McDonald’s, successfully helped pressure Cargill and other transnational commodities companies to stop sourcing soy from newly deforested land in the Amazon in 2006. However, they still buy their chicken from Cargill, which feeds its poultry with imported soy, much of it apparently coming from the Bolivian Amazon, the Cerrado and the Gran Chaco — areas rapidly being deforested for new soy plantations.

Starting in 2017, a voluntary Cerrado Manifesto Statement of Support (SoS) was signed by many EU and U.S. supermarkets and fast food chains, including McDonalds, Walmart, Marks & Spencer and Unilever, that proposes the elimination of soy producers who cause deforestation from their supply chains. However, large commodities firms such as Cargill, Bunge, and ADM have yet to sign the SoS. 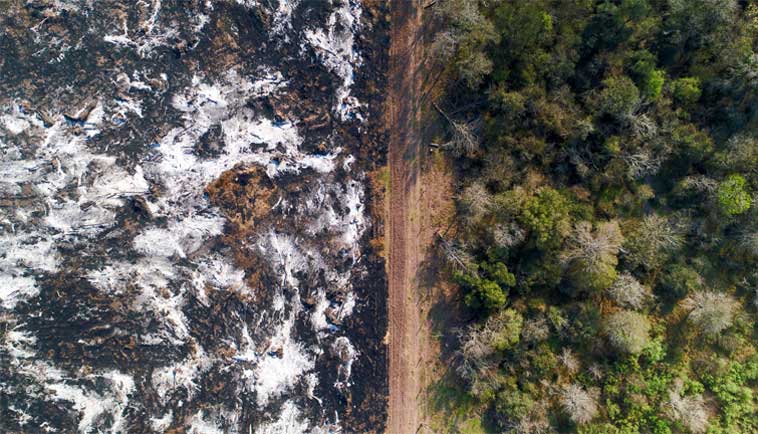 The promise of sustainability

Contacted by Mongabay, Marks & Spencer, along with the German supermarket chain Aldi Süd and France’s Carrefour did not respond to interview requests. Carrefour informs through its website that:

“soya is frequently imported from Brazil, where it is one of the causes of deforestation” while “The Group’s policy on forests sets out to ensure the sustainable management of soya,… giving priority to… Non-GMO soya for Carrefour’s ‘fed on GMO-free feed’ animal product brand.”

Mighty Earth, however, found little evidence of sustainable growing practices. In their investigation, they determined that

“soy grown [in the Gran Chaco] is genetically modified and requires vast amounts of chemical fertilizers and toxic pesticides like the herbicide glyphosate [produced by Monsanto and known as Roundup. These chemicals] are transforming the Chaco. Waterways have become polluted, and local community members report a surge in birth defects, cancers and respiratory illnesses.”

Aldi Süd, with stores in several European countries, the United States and Australia, maintains a sustainability page on its website, but it doesn’t say how it tackles the soy deforestation and chemical fertilizer and pesticides problem.

These giant retailers belong to the largest single business sector in Europe, the food and beverage industry, with sales of over € 1 trillion (US $1.14 trillion) in 2016. In order to constantly supply their shelves with meat and dairy goods, livestock producers in Germany, the Netherlands, France, Italy, Spain and England all buy foreign soy, mainly from Cargill and Bunge, which, in turn, are increasing their presence in the Gran Chaco. 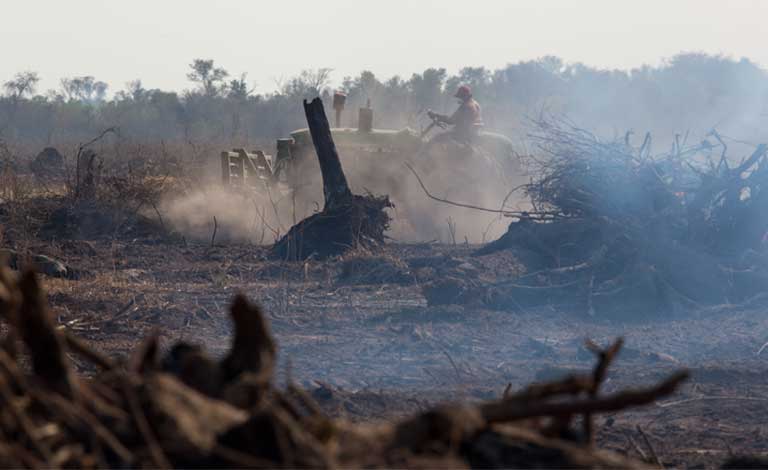 “In several places [in the Gran Chaco] where deforestation was occurring, the farmers we interviewed said they sold to these two traders. Although competitors like Louis Dreyfus Company and Wilmar International have expressed willingness to extend the Brazilian [Amazon Soy Moratorium’s] success across South America, Cargill and Bunge have bitterly resisted efforts to expand deforestation-free production,” according to Mighty Earth.

“ADM operates in regions that are less exposed to deforestation, but has recently backtracked on its previous support for industry-wide conservation measures. ADM has told Mighty Earth that they’ve resisted action because they ‘don’t want to break ranks’ with their competitors – prioritizing industry solidarity over both the environment and fair marketplace competition,” said the NGO.

“Our first priority is applying our commitment to eliminate deforestation from our supply chains globally. Our plan is public and we are reporting on our progress transparently. We are also working alongside SoS [Cerrado Manifesto] signatory companies, peers, NGOs and others in the Cerrado Working Group, which is focused on achieving collective agreement on how to eliminate deforestation and go even further.”

“Cargill supports the goal of eliminating deforestation in South America. We agree with the intent of the Cerrado Manifesto and support the Cerrado Working Group’s (GTC) commitment to end the conversion of natural habitats in the Cerrado in the shortest amount of time considering the social and economic realities of the region.”

“Cargill and the GTC itself believes that a moratorium on soy in the Cerrado isn’t the answer.  A moratorium risks driving further agricultural expansion – and deforestation – into new areas. We need the buy-in of all local stakeholders as part of an effective land use planning process. We participate in the GTC with the World Wildlife Fund, Greenpeace and other partners to identify local, broad-based, solutions.”

ADM did not respond to requests for comment for this story. 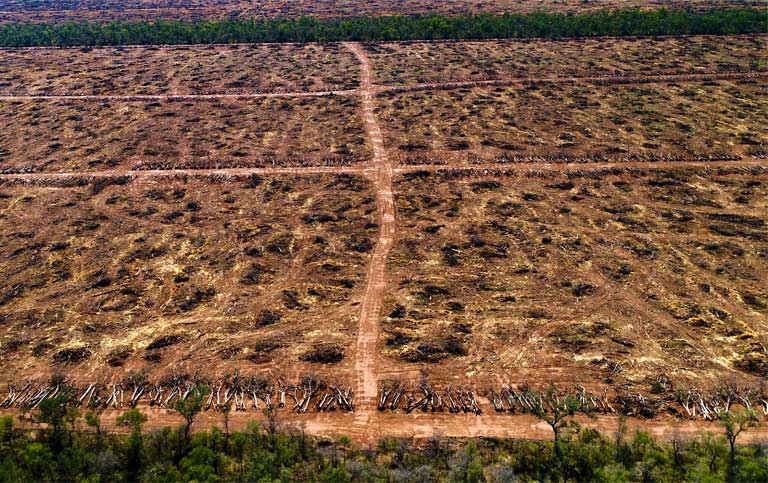 Illegal forest clearance in the Gran Chaco as seen from the air in Argentina. Image by Jim Wickens, Ecostorm via Mighty Earth.

Can the Gran Chaco be saved?

An article published in the journal Science in February 2017, “Forest Conservation: Remember Gran Chaco,” summarizes the state of the world’s largest continuous dry forest: “This region is a global deforestation hotspot. Yet, only 9 percent of the Gran Chaco is currently protected. For these reasons, the Gran Chaco is one of the most threatened ecoregions worldwide.”

Faced with destruction by industrial agribusiness, this little known South American region is not just biodiverse. It is also home to numerous indigenous groups, including the Ayoreo, Chamacoco, Enxet, Maka’a, Nandeva and Wichi. Unfortunately for these indigenous communities, and for the region’s unique flora and fauna, there seems to be little movement toward conservation by agribusiness, commodities traders, or national governments in South America and Europe.

Mighty Earth asserts that protecting the Gran Chaco would be relatively inexpensive:

“Technical experts administering a successful system that has virtually eliminated deforestation for soy in the Brazilian Amazon estimate that extending forest monitoring to other soy growing regions in Latin America, including the Gran Chaco, would cost only [between] US $750,000 and US$ 1,000,000 to establish.” That seems like a small price to pay to help make South American soy, and the soy supply chain, more sustainable and to preserve the unique people, plants and animals of the Gran Chaco. 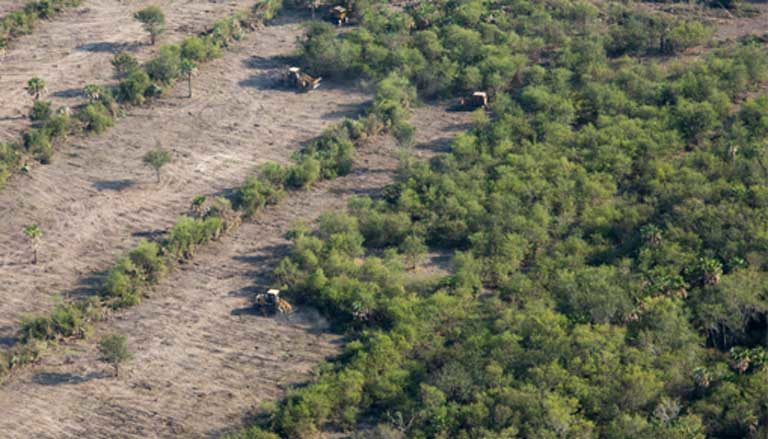 The original source of this article is Mongabay
Copyright © Jenny Gonzales, Mongabay, 2018