The shift in political and military alliances is not limited to Turkey, a profound shift in geopolitical alliances is occurring which tends to undermine US hegemony in the broader Middle East Central Asian region as well as in South Asia.

Several of America’s staunchest allies have “changed sides”. Both NATO and the Gulf Cooperation Council (GCC) are in crisis.

NATO is characterized by profound divisions,  largely resulting from Ankara’s confrontation with Washington.

Turkey –which constitutes NATO’s heavyweight– is now fighting US-supported Kurdish rebels in northern Syria, –i.e  the US which is member of NATO is supporting and financing Kurdish rebels who are fighting a NATO member state.

While Turkey formally remains a member of NATO –which has an integrated and coordinated air defense system–, the Erdogan government has purchased Russia’s S400 air defense system which is slated to be used against America’s Kurdish proxies in Northern Syria.

A NATO member state is now using the air defense system of an enemy of US-NATO against US-NATO supported rebels.

In turn, Turkey has dispatched troops to Northern Syria with a view to eventually annexing part of Syria’s territory. In turn, Moscow and Ankara have established an alliance of convenience.

Israel is a firm supporter of the formation of a Kurdish state in Iraq and Northern Syria, which is considered as a stepping stone to the formation of Greater Israel.  Tel Aviv is considering the relocation from Israel of more than 200,000 Jewish ethnic Kurds to the Kurdistan region of Iraq.

Meanwhile, Turkey  has established closer links with Iran, which ultimately contributes to undermining US-NATO strategies in the broader Middle East.

Washington’s strategy consists in destabilizing and weakening regional economic powers in the Middle East including Turkey and Iran. This policy is also accompanied by a process of political fragmentation (see map below)

Since the Gulf war (1991), the Pentagon has contemplated the creation of a “Free Kurdistan” which would include the annexation of  parts of Iraq, Syria and Iran as well as Turkey (see US military academy map below).

Under these circumstances, will Turkey remain an active member of NATO? 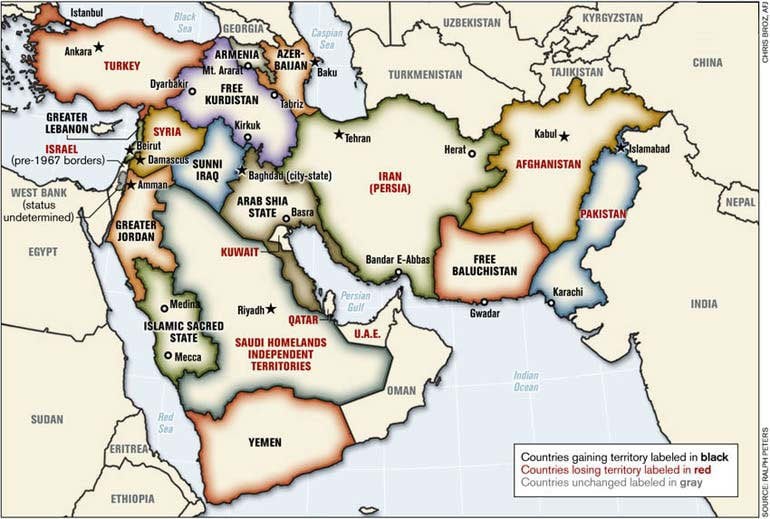 Ralph Peters Map: The Project for the New Middle East

While the largest US military base in the Middle East is located in Qatar, the Qatari government has close links to Iran. Moreover, Tehran came to its rescue in the immediate wake of the Saudi blockade.

While US Central Command (USCENTCOM) has it’s headquarters at a US military base outside Doha, Qatar’s main partner in the oil and gas industry including pipelines is Iran. In turn, both Russia and China are actively involved in the Qatari oil and gas industry.

Iran and Qatar cooperate actively in the extraction of  maritime natural gas under a joint Qatar-Iran ownership structure. These maritime gas fields are strategic, they constitute the World’s largest maritime gas reserves located in the Persian Gulf. 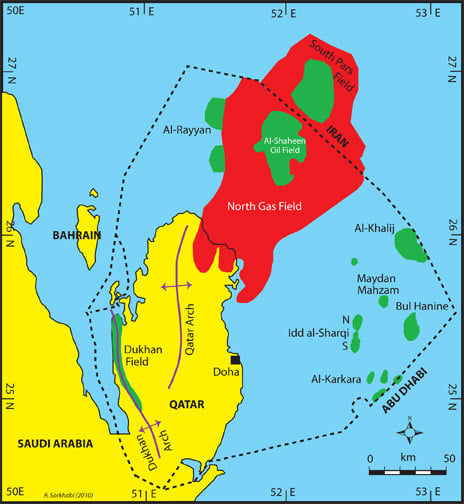 Towards “NATO-Exit”? Shift in the Structure of Military Coalitions. Turkey’s Alliance with Russia, China and Iran?

In other words, while actively cooperating with Iran, Qatar has a military cooperation agreement with the US, which in practice is directed against Iran. US Central Command based in Qatar is responsible for military operations against enemies of  US-NATO including Iran, which happens to be Qatar’s main partner in the oil and gas industry. The structure of these cross-cutting alliances is contradictory. Will the US Seek regime change in Qatar?

Meanwhile, Turkey has established a military base in Qatar.

These new alignments also have a direct bearing on oil and gas pipeline routes. Qatar has abandoned the pipeline route project through Saudi Arabia and Jordan (initially sponsored by Turkey) in favor of the Iran based pipeline route out of Asuleyeh through Iran, Iraq and Syria, which is supported by Russia.

Russia’s geopolitical control over gas pipelines going to Europe has been reinforced as a result of the Saudi blockade. 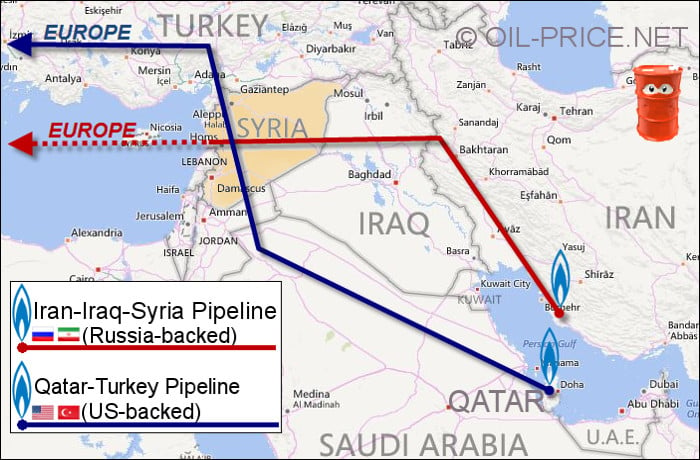 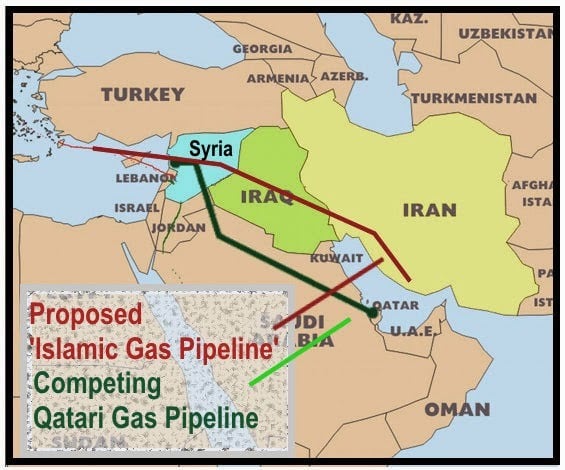 In turn, Qatar is also slated to integrate the pipeline routes linking Iran to Pakistan and China via Iran’s port of Asaluyeh. 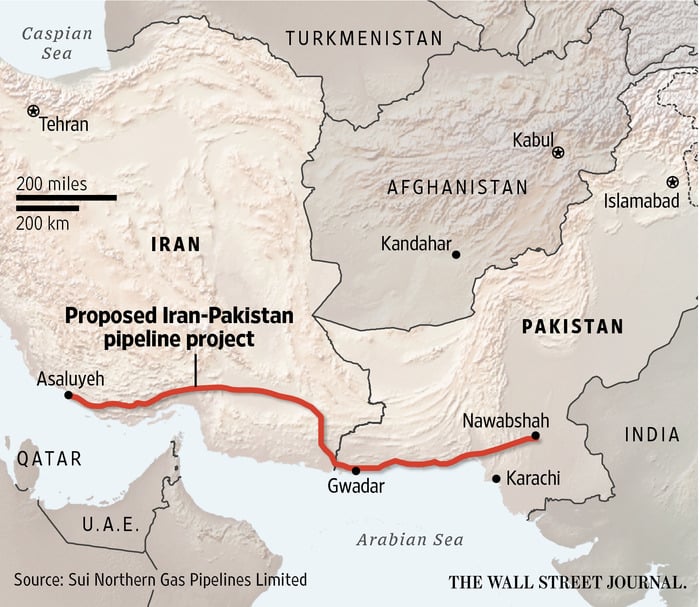 Another major shift in geopolitical relations has occurred, which has a profound impact on US hegemony in both Central and South Asia.

On June 9, 2017, both India and Pakistan became simultaneously members of the Shanghai Cooperation Organization (SCO), the Eurasian economic, political and mutual security organization largely dominated by China and Russia. Needless to say, the membership of India and Pakistan in the SCO affects their military cooperation agreements with the US.

While the SCO with headquarters in Beijing is not officially a “military alliance”, it nonetheless serves as a geopolitical and strategic “counterweight” to US-NATO and its allies. In the course of the last few years, the SCO has extended its cooperation in military affairs and intelligence. War games were held under the auspices of the SCO.

With Pakistan and India as full members, the SCO now encompasses an extensive region which now comprises approximately half of the World’s population.

The simultaneous instatement of both countries as full members of the SCO is not only symbolic, it marks a historic shift in geopolitical alignments, which has a de facto bearing on the structure of economic and military agreements. Moreover, it has also a bearing on the inner-conflict between India and Pakistan which dates back to the countries’ Independence.

Inevitably, this historic shift constitutes a blow against Washington, which has defense and trade agreements with both Pakistan and India.

While India remains firmly aligned with Washington, America’s political stranglehold on Pakistan (through military and intelligence agreements) has been weakened as a result of Pakistan’s trade and investment deals with China, not to mention the accession of both India and Pakistan to the SCO, which favors bilateral relations between both countries as well as cooperation with Russia, China and Central Asia at the expense of  their historical links with US.

In other words, this enlargement of the SCO weakens America’s hegemonic ambitions in both South Asia and the broader Eurasian region. It also has a bearing on energy pipeline routes, transport corridors, borders and mutual security, maritime rights.

With the development of Pakistan’s bilateral relations with China, since 2007, the US clutch on Pakistan politics — which largely relied on America’s military presence as well as Washington’s links to Pakistan’s military-intelligence establishment– has indelibly been weakened.

Pakistan’s full membership of the SCO, its links with China and Iran should contribute to reinforcing the powers of the Islamabad government.

History tells us that the structure of political alliances is fundamental.

What is unfolding is a series of contradictory cross-cutting coalitions both “with” the US as well “against” the US.

We are witnessing shifts in political and military alliances which largely contribute to weakening US hegemony in Asia and the Middle East.

Is Turkey intent upon opting out of NATO? It’s bilateral relationship with Washington is in disarray.

Meanwhile, the Gulf Cooperation Council (GCC) which constitutes America’s staunchest ally in the Middle East is no longer functional. Qatar has not only aligned itself with Iran, it is actively cooperating with Russia.

In turn, America’s bilateral military cooperation agreements with both Pakistan and India are also affected following the accession of both countries to the SCO, which constitutes a de facto military alliance dominated by China and Russia. 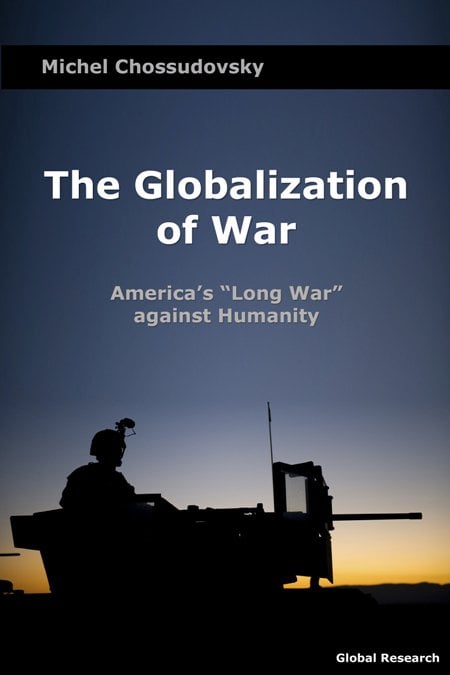 ation of War is undoubtedly one of the most important books on the contemporary global situation produced in recent years.

In his latest masterpiece, Professor Michel Chossudovsky shows how the various conflicts we are witnessing today in Ukraine, Syria, Iraq and Palestine are in fact inter-linked and inter-locked through a single-minded agenda in pursuit of global hegemony helmed by the United States and buttressed by its allies in the West and in other regions of the world.   Dr Chandra Muzaffar, President of the International Movement for a Just World (JUST)

The Globalization of War: America’s “Long War” against Humanity

The Book can be ordered directly from Global Research Publishers.