Samir Amin, the Egyptian-born social scientist and activist, died in a Paris hospital on August 12, 2018 at the age of 86.

He was a prodigious researcher and publisher issuing over 40 books, hundreds of articles and papers dealing with the relationship between the colonial, semi-colonial and neo-colonial territories and the imperialist states.

Amin was a leading proponent of dependency analysis and world systems theory which gained prominence during the 1970s among left organizations, insurgent academics and public intellectuals. It was Andre Gunder Frank, the German-American professor who spent time as a consultant during the administration of Salvador Allende in Chile; Walter Rodney, the African-Guyanese historian and co-founder of the Working People’s Alliance (WPA), and Amin who were the most well-known advocates for expanding the Marxist paradigm to encompass in specific terms the inherently exploitative nexus between the underdeveloped and developed regions of the planet.

As an initiator of the Council for the Development of Social Science Research in Africa (CODESRIA), Amin was able to influence many successive waves of academics seeking to explain the post-colonial crisis in African development. In the 1970s, the newly-independent African states were overwhelmed by national debt to the institutions of international finance capital.

Although in many countries the national liberation struggles led by workers, farmers, youth, women, intellectuals and professionals made tremendous gains against what appeared to be overwhelming obstacles, the ongoing realities of dependence by the emergent states related to the need for credit, technology transfers, the building of internal industrial projects and attempted diplomatic isolation by the West, placed these governments at a disadvantageous position well into the 1970s and 1980s. 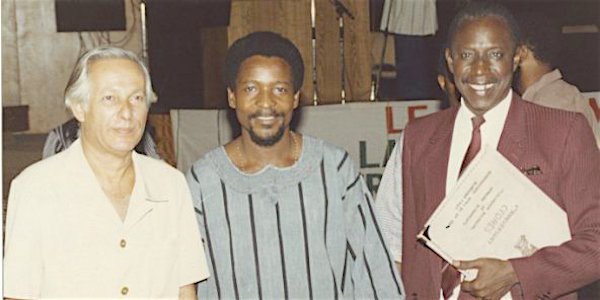 The 1980s were marked by the advent of International Monetary Fund (IMF) and World Bank engineered Economic Recovery Programs (ERPs) and Structural Adjustment Program (SAPs), ostensibly designed to balance current account deficits and to facilitate the repayment of loans. Nonetheless, the actual impact of these policies served further to arrest the genuine development of African societies placing them in perpetual subservience to the leading capitalist economies.

In 1974, Amin’s work on placing these phenomena within a schematic framework was released under the title “Accumulation on a World Scale: A Critique of the Theory of Underdevelopment.” In this book he described the imperialist-led approach to investments in their former colonies and contemporary neo-colonies as “peripheral capitalism.”

“The process of development of peripheral capitalism goes forward within a framework of competition (in the broader sense of the world) from the center, which is responsible for the distinctive structure assumed by the periphery, as something complementary and dominated. It is this competition that determines three types of distortion in the development of peripheral capitalism as compared with capitalism at the center.” (p. 170)

This center is the industrialized capitalist states in Western Europe and North America where economic priorities are established for the world system of capitalism. Investments in the nations of Africa, Asia and Latin America are aimed at maximizing the profitability of multi-national corporations and banks.

Amin spells out these three pillars upon which imperialism is built saying they are:

“(1) a crucial distortion toward export activities, which absorb the major part of the capital arriving from the center; (2) a distortion toward tertiary activities, which arises from both the special contradictions of peripheral capitalism and the original structures of the peripheral formations; and (3) a distortion in the choice of branches of industry, toward light branches, and also , to a lesser degree, toward light techniques.” (p. 170)

Such a structural system of economic relations enhances the power and authority of the leading capitalist states at the expense of the neo-colonial outposts. Such a situation disarticulates national policy within the neo-colonial dominated states hampering their capacity for genuine growth and development.

African Resistance to the World System

Of course the African popular classes and intellectual strata have not been complacent in such a scenario. From the period of the onset of slavery and colonialism, the people have revolted, fought for self-determination and worked to build alternative structures which address the needs of their societies and social classes.

From the armed and mass efforts in Algeria and Egypt during the 1950s and 1960s in the north of the continent to the emphatic pan-African program of party-building in the West African states of Ghana, Guinea, Mali, etc., in the same time period extending to the military, peasant and working class driven approaches in Mozambique, Angola, Zimbabwe, South Africa, Namibia, et.al, in the 1970s through the early 1990s, Africans have made tremendous contributions to the theoretical and practical aspects of national liberation and socialist construction. 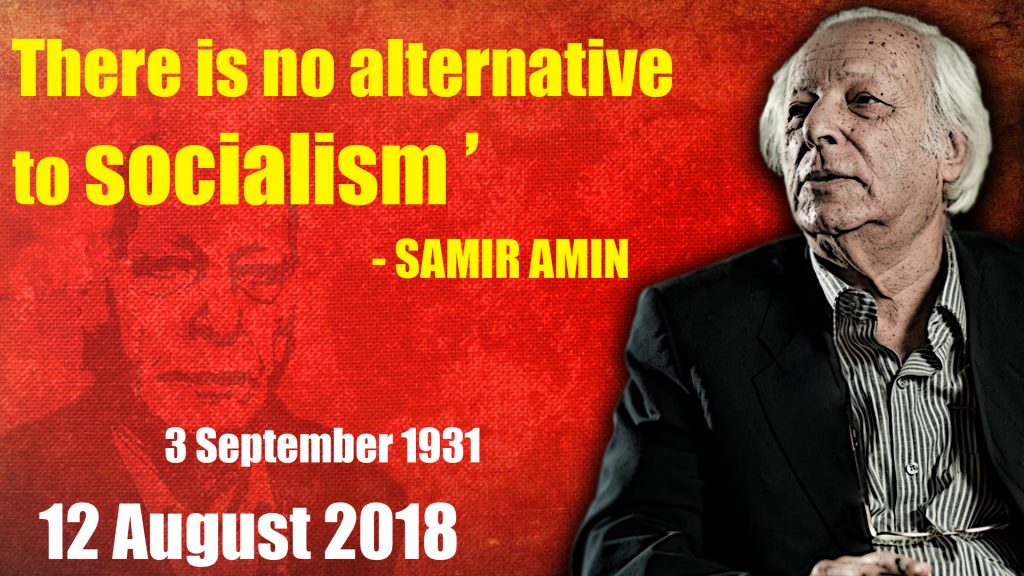 Beyond the spontaneous rebellions, protest activity and work stoppages, African and Asians have given credence to the notions of Marxism as being a living science. Applying scientific socialism to the peripheral territories has enriched the emancipatory vision of the potential for the elimination of poverty and all other forms of underdevelopment.

In his book “Delinking: Toward a Polycentric World”, published in French in 1985 and English in 1990, Amin emphasizes that:

“Marxism has already become a decisive force for social transformation in Asia and Africa. It is on these two continents perhaps that it can be seen most closely associated with social transformations. It could not be said to have such effect in Europe and North America. But Marxism, according to Marx, is not a philosophy satisfied with interpreting history. It seeks to change it. Doubtless in Asia and Africa the character of the transition in which it shares is open to question (socialist transition or capitalist expansion?). But it is undeniable that it plays a genuine role in the life of the peoples.” (p. 147)

Despite the collapse of the socialist project in Eastern Europe and the Union of Soviet Socialist Republics (USSR) in the late 1980s and 1990s, the People’s Republic of China, Democratic Vietnam, the Democratic People’s Republic of Korea (DPRK) and the Republic of Cuba still pose viable models of development in opposition to world imperialism. Although there have been road block and setbacks, the liberation movements turned political parties in Mozambique, Angola, Zimbabwe, South Africa and Zimbabwe remain in power playing a progressive role within the political and ideological struggle against Western hegemony. Witness the emergence of the Brazil, Russia India, China and South Africa (BRICS) Summits. Also the Forum on China Africa Cooperation (FOCAC) has been in existence for nearly two decades charting a course for inter-state relations in an attempt to break out of the distortions imposed by the IMF and the World Bank.

Amin in Delinking discusses the “Relevance of Maoism” where the China model of socialist construction is upheld as representing a consistent path from the Marxism of Marx to the application of the theory to Asia and Africa. Socialism in China has outlived that of the USSR, Eastern Europe and Yugoslavia. Today China’s role in Africa has drawn the ire of imperialism which continues to covet its previous unhindered access to the underdeveloped and emerging markets. Most African leaders push back by pointing to the distinction of capitalist investment and the Chinese joint partnerships focusing on infrastructural and technological development.

The section on Maoism observes:

“From this point of view these fundamental problems of the transition have so far been handled fairly correctly during China’s evolution. Obviously not every orientation and political initiative has been correct at all times, but in the narrower sense that the mistakes have never led to an irreversible situation. In this sense Maoism represents an advance on Leninism. It remains to be seen if the ‘new course’ will follow this logic of continuity, or on the contrary initiate a break with it. The reforms envisaged may in our opinion provide a deepening of socialist development and thereby provoke new negative aspects that could in principle be corrected.” (p. 135)

Toward a New International: Amin’s Last Will and Testament

Just weeks prior to his death, Amin wrote an open letter to the revolutionary forces of the world calling for the founding of a new international alliance of progressive and socialist forces. Amin saw this as a priority in the present period based upon the entrenched nature of imperialism and the lack of a forum for alternative voices from the working masses and radical intellectuals to provide a systematic critique and program to challenge Western orthodoxy.

Amin views the idea of “Globalization” as a modern form of imperialism. The oppressive and exploitative system cannot be fought strictly on a national level and therefore the struggle must renew the political thrust of internationalism based upon the interest of the majority of the world’s population.

In this letter Amin acknowledges that:

“The idea of building a new organization similar to the International of Workers and Peoples has been in the air for a few years. We need a structured organization that will set objectives to our struggles and build concrete solidarity between our movements. Workers from every continent will have to be represented in the International so that unity in diversity is our major guideline. The question of popular sovereignty should not be evaded in our reflection on how to build the alliance of solidarities. It is in this context that we propose a meeting of reflection for the creation of new International Alliance of Workers and Peoples. This meeting could be held in Tunisia or any other Southern country accessible to delegates from around the world. The meeting will bring together activists representing movements, parties, unions, networks from all continents and regions. The following will be defined as regions: Latin America, Africa, North Africa and the Mediterranean, Western Europe, Eastern Europe, Asia, the United States and the Anglo-Saxon world.”

At present with the transition of Amin it is up to those remaining to figure out the logistics and ideological perimeters of such a gathering. Questions surrounding the character of discussion and the structural aspects of the organization will have to be debated and resolved.

Nevertheless, the appeal from Amin is a viable one. The majority must be organized and united in order for the dangers facing humanity to be eliminated.

All images (except the featured) in this article are from the author.