This report by prominent British Scientist Dr. Chris Busby was published in April 2018.

In recent developments, Chris Busby’s home was raided by police. He was arrested on trumped up charges.

This arrest points to the suppression of Freedom of Expression in the UK, specifically with regards to Busby’s scientific analysis of the Skripal Affair. 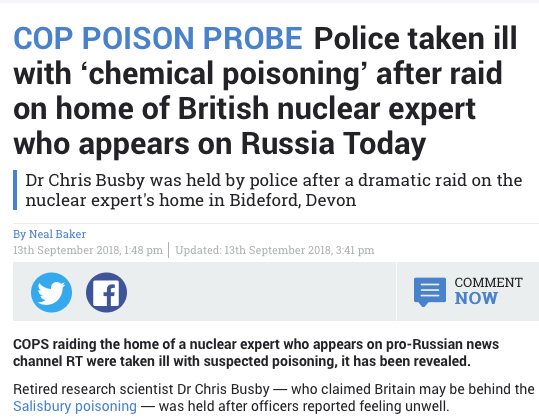 Officers were treated at the scene for various symptoms but were not harmed and have since returned to duty.

Bomb disposal teams were drafted in as a search of the house resulted in items being found that “require expert analysis”, police said.

Dr Busby, 73, is said to keep radioactive samples at home including mud from around the Sellafield nuclear site in Cumbria.0

Police said a 73-year-old local man has been detained under the explosives act and awaits questioning — although they would not confirm if this was Mr Busby. (The Sun, September 13, 2018)

Dr Busby says a few words about the Russian Nerve Agent issue. He speaks as an expert in this area.

Chris worked for several years at the famous Wellcome Research laboratories in Beckenham, London as a Senior Scientist in the Department of Physical Chemistry. His job, at the basic level, was to help determine the structure and origin of pharmaceutical compounds. So, he is an expert in this area.

He also carried out similar work at Queen Mary College London for his first PhD and synthesised complex organic chemicals.

From that, he relates that the synthesis of a specific small organic chemical like the supposed Novichoks is not very difficult. Most synthetic organic chemists could knock up small quantities of the 234 compound, given the structure.

The determination and identification methods mainly depend on mass spectrometric fragmentation patterns, and include the spectrum of stray molecular fragments from impurities associated with the synthesis route. This is how Wellcome located Patent jumping, and took this evidence (from Busby and colleagues) into the courts. All chemists know this, and that is why the Porton head said what he said, as any chemist would have been able to raise this issue and show that he was lying, if he said anything else. It is basic physical chemistry.

So, the new headline in the Times, about a secret Russian laboratory is also bogus.

What is also clear is that the mass spectrum of the A234 compound was put on the NIST database in 1998 by a worker from the USA chemical warfare laboratory.

Chris therefore concludes that this whole affair is a tissue of lies and misdirection, rather like the WMD Iraq scenario and is aimed at creating a war with Russia that no one can win and where all life will lose.

Doubts About “Novichoks”
The original source of this article is drdrwoland
Copyright © Prof. Christopher Busby, drdrwoland, 2018