The Real Confrontation Is Yet To Come

There has been a spate of articles recently on the ten year anniversary of the financial collapse. We wrote about this anniversary two weeks ago, describing the cause of the collapse and the reasons why we are still at risk for another one. Now, we look at how the aftermath of the collapse is shaping current politics, people’s views on the economic system and the conflict that lies ahead to create an economy for the 21st Century.

The Aftershocks Of The Collapse Are Still Being Felt

Jerome Roos of ROAR Magazine writes that the response to the 2008 crash – bailing out the banks but not the people – led to unrest across the globe, beginning with the Arab Spring, and a growing anti-capitalist sentiment. He goes on to say, “It has recently begun to consolidate itself in the form of vibrant grassroots movements, progressive political formations and explicitly socialist candidacies that collectively seek to challenge the untrammeled power and privileges of the ‘1 percent’ from below.”

The stagnant economy, austerity measures and resulting increased debt have opened a space for people to search for and try out alternative economic structures that are more democratic. They have also created conditions for a rise of nationalism on the right. Roos concludes that the “real confrontation is yet to come.”

In the United States, the economic conditions have revived populist movements on both the right and the left. Gareth Porter explains the Democratic and Republican parties are aware of the great dissatisfaction with their failed policies and know they need to try to appease the public by trying new policies, but they don’t know how.

He points to recent joint papers put out by the Center for American Progress, a Democratic Party think tank, and the American Enterprise Institute, a Republican Party think tank. One from May is called, “Drivers of Authoritarian Populism in the United States,” and the other from July is called, “Partnership in Peril: The Populist Assault on the TransAtlantic Community.” In the papers, rather than present alternative solutions, they attack Jill Stein of the Green Party and Bernie Sanders, a Democratic Socialist.

There is a battle inside the Democratic Party between progressives, some who call themselves socialists, and the dominant business-friendly corporatists. As Miles Kampf-Lessin writes,

“An August poll shows that, for the first time since Gallup started asking the question 10 years ago, Democrats now view socialism more favorably than capitalism.”

But the Democratic Party has been deaf to the interests of its constituents for decades. At meetings organized by centrist Democratic Party groups this summer, lacking populist solutions, the best they could come up with was “the center is sexier than you think.” And while a few “progressives” in the Democratic Party won their primaries, they are not receiving support from the party. Instead, the party leaders are throwing their weight behind security state Democrats, who could make up half of newly-elected Democrats this November.

In the Republican Party, Donald Trump’s faux populism has shown itself to be a sham. The Republican Party is unable to handle Trump, who defeated a series of elitist candidates starting with the next heir of the royal Bush family, Jeb. A record number of Republicans have given up and decided not to run for re-election. Speaker of the House Paul Ryan saw the writing on the wall and said he wanted to spend time with his family.

The 2018 election will bring change as Republican control of both Chambers of Congress are at risk, especially the House, but this is unlikely to resolve the crises the country is facing. Democrats are more focused on going after Trump. We can expect a flood of subpoenas investigating all aspects of his administration and business, rather than solutions to the economic and social crises.

Image on the right: From Catholic News USA. 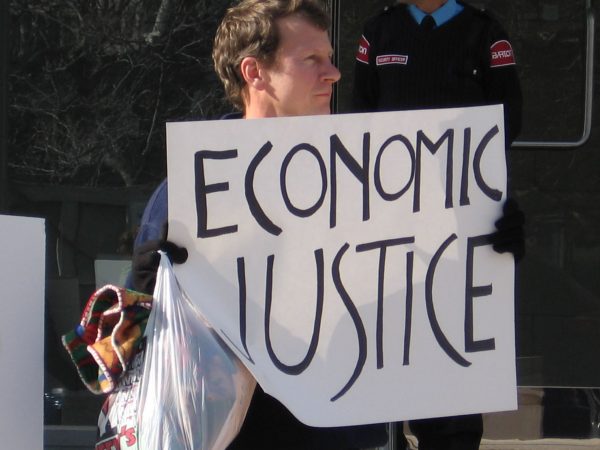 What The People Are Demanding

There is a growing anti-capitalist revolt, especially against the form it has taken in the United States, i.e. neoliberalism that privatizes everything for the profit of a few while cutting essential services for the many.  Anti-capitalism is so widespread that even corporate media outlets like Politico are taking notice, as they did in an article describing what socialism would look like in the United States. And President Obama this week discovered “a great new idea,” Medicare for all.

Of course, there has been a movement for National Improved Medicare for All for decades, and it is now gaining momentum. A new poll found even a majority of Republicans support Medicare for all, as do 85% of Democrats. Out of all of the ‘wealthy’ nations, the United States is ranked at the bottom, only above Greece, when it comes to the percentage of the population that has healthcare coverage. The third poorest country in our hemisphere, Bolivia, announced this week it will provide healthcare for all.

While polls indicate increased support for socialism, in the United States there is a lack of clarity on what that means exactly. Rather than a state socialism, most people are advocating for policy changes that socialize the basic necessities of the people. National Improved Medicare for All is one example.  There is also increased pressure for community-controlled or municipal Internet, taking this critical public service out of the hands of the much-hated for-profit providers.

Other demands include a living wage, free college education and affordable housing. There is also increased advocacy for a universal basic income and for public banks. All of these socialized programs can and do exist in capitalist countries. 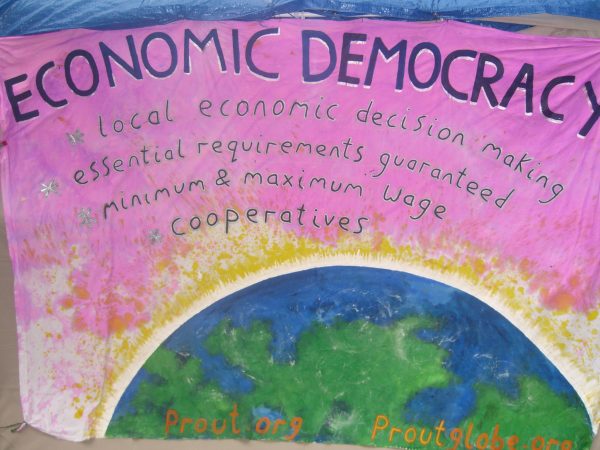 The new economy is still taking shape and will likely result from a process of trying new practices out and gradually replacing current economic institutions with the new ones that gain support. The new institutions will need to be radically different than the current ones, meaning they are rooted in different values, if they are to change the current system.

In Policy Options, Tracy Smith Carrier urges using a human rights framework for the new economy. The human rights principles are universality, equity, transparency, accountability and participation. Rather than charity, which doesn’t solve the problems that brought people into a situation of need, her research team advocates for putting in place a poverty-reduction strategy that targets “the building blocks of society that reproduce poverty.”

This past week, we interviewed economist Emily Kawano of the US Solidarity Economy Network for our podcast, Clearing the FOG. The episode is called “So You Want To End Capitalism, Here’s How.” Like the human rights framework, the solidarity economy is built on a set of principles: democracy, cooperation, equity, anti-oppression, sustainability and pluralism. Kawano describes the formation of the solidarity economy using the analogy of a caterpillar’s metamorphosis into a butterfly – the various pieces of the economy are forming and finding each other and may eventually coalesce into a new system composed of old and new elements.

This week on Clearing the FOG, we will publish an interview with Nathan Schneider, author of “Everything for Everyone: The Radical Tradition that is Shaping the New Economy.” Schneider acknowledges that his generation is the first one that will fare worse than its predecessors. Out of necessity, people are creating more democratic economic structures. The Internet is a helpful tool in the process, particularly in creating ‘platform cooperatives.’

The economy needs to move from concentrated wealth to shared economic prosperity. In addition to requiring specific changes in policy that lead to greater socialization of the economy, systemic changes will be needed to establish a cooperative and egalitarian economy. Without far-reaching changes to the structure of the state, they are highly unlikely to succeed.

There will be another economic crisis in the near future which will present opportunities for rapid transformational change, if the movement is organized to demand it. JP Morgan issued a report on the tenth anniversary of the collapse warning of another collapse and mass social unrest like the US has not seen in 50 years. It is up to us now to prepare for that moment by developing our vision for the future and working out the types of institutions that will bring it about. The other option, if we are not prepared, could bring fascism and greater repression.

As Jerome Roos concludes, “…the political fallout of the global financial crisis is only just getting started. The real confrontation, it seems, is yet to come.”