From inception, Russiagate was and remains a colossal scam, perhaps the most shameful political chapter in America’s history, McCarthyism on steroids.

Robert Mueller never should have been appointed special counsel. His conflicts of interest alone should have disqualified him.

Anti-Trump fifth column Deputy Attorney General Rod Rosensteinappointed him to probe “any links and/or coordination between the Russian government and individuals associated with the campaign of President Donald Trump, and any matters that arose or may arise directly from the investigation.”

According to the UK Daily Mail, the Hill, Fox News, and other media, Page admitted in earlier closed-door House Judiciary and Oversight Committees testimony that no evidence suggested Trump team/Russia collusion before Mueller’s appointment as special counsel — showing he never should have been appointed. 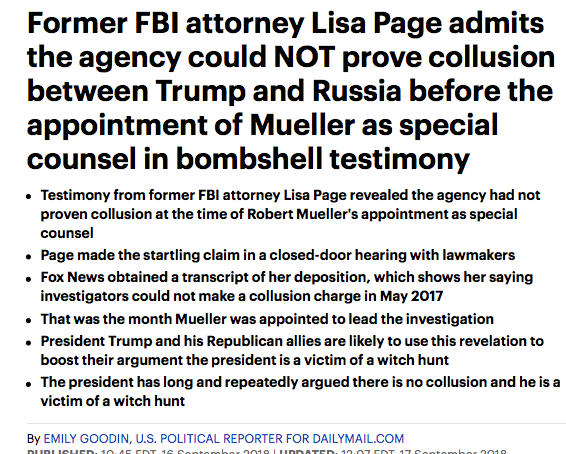 In response to Rep. John Ratcliffe asking about text messages she and Strzok exchanged in May 2017 before Mueller’s appointment, she admitted that months of FBI investigative work found no evidence of Trump team/Russian collusion or meddling.

Report: Former FBI Lawyer Lisa Page Revealed Under Oath That There Was No Basis for Mueller’s Appointment

“It’s a reflection of us still not knowing,” she said, adding “it still existed in the scope of possibility that there would be literally nothing” to connect Trump, his team, and Russia no matter what Mueller or other investigative work might try to prove otherwise.

These remarks alone exposed the Russiagate scam. No justification existed to initiate the witch-hunt probe.

Page was the lead FBI lawyer involved in trying to prove a Trump team/Russia connection, beginning in summer 2016. She and Strzok transitioned the agency’s probe to Mueller’s involvement as special counsel, assuming his position on May 17, 2017.

After 16 months of trying to make a case against Trump and Russia, he found no evidence of collusion or Kremlin election meddling because none exists – no matter how long the deplorable witch-hunt continues.

The London Daily Mail headlined “Former FBI attorney Lisa Page admits the agency could NOT prove collusion between Trump and Russia before the appointment of Mueller as special counsel in bombshell testimony.”

The Washington Examiner headlined “Lisa Page testified investigators had no proof of collusion when Robert Mueller was appointed: Report.”

A transcript of Page’s earlier closed-door testimony obtained by Fox News quoted her saying, along with what was quoted above, the following:

“(I)n the scheme of the possible outcomes, the most serious one obviously being crimes serious enough to warrant impeachment; but on the other scale that, you know, maybe an unwitting person was, in fact, involved in the release of information, but it didn’t ultimately touch any senior, you know, people in the administration or on the campaign. And so the text just sort of reflects that spectrum.”

“But I can say that Lisa Page left me with the impression, based on her own words, that the lead investigator of the Russian collusion case, Peter Strzok, had found no evidence of collusion after nearly a year” of trying to uncover some.

On May 18, 2017, the day after Mueller’s appointment as special counsel, Strzok text-messaged Page saying: “(Y)ou and I both know the odds are nothing. If I thought it was likely I’d be there no question. I hesitate in part because of my gut sense and concern there’s no big there there.”

The FBI sacked Strzok — not because of unacceptable conduct, because his actions became a public embarrassment to the agency. He became damaged goods. Page resigned before being sacked.

In January, Department of Justice (DOJ) Inspector General (IG) Michael Horowitz issued a damning report on FBI and DOJ dysfunctional and unaccountable actions throughout the probe into Hillary’s private server use for official State Department business.

Horowitz said Strzok’s text messages and actions were “not only indicative of a biased state of mind but, even more seriously, implie(d) a willingness to take official action to impact the presidential candidate’s electoral prospects,” adding:

The Russiagate probe “potentially indicated or created the appearance that investigative decisions were impacted by bias or improper considerations.”

“(t)he IG report has destroyed the credibility of the Department of Justice and the FBI.”

Exposure of their wrongdoing should have ended the Russiagate witch-hunt probe straightaway – what never should have been initiated in the first place, amounting to McCarthyism on steroids.

It continues with no end point in prospect, perhaps for the duration of Trump’s tenure.

It’s an endless campaign to delegitimize and smear him for the wrong reasons, not the right ones — along with waging political, economic, and propaganda war on Russia, heading toward things turning hot if dark forces in Washington push things too far.