Frustrated by Israel’s 12-year blockade of the Gaza Strip, young Palestinians in the besieged coastal strip took to social media on Monday to communicate to the United Nations (UN) and the world the urgent need to lift the siege that has brought Gaza to the brink of a humanitarian catastrophe.

Using the hashtag  #GazaToUN, Palestinians in Gaza were joined by Twitter users from across the Occupied Palestinian Territories (OPT), Jordan, Lebanon, the United States, the United Kingdom, New Zealand –  and even South Africa –  to highlight how the Israeli siege has strangled Gaza’s economy, destroyed the health-care system and imprisoned almost 2 million Palestinians.

“We want the world to know and understand what it’s like to live in a cage,” explained Rana Shubeir, the campaign’s spokesperson in an interview with the Afro-Palestine Newswire Service. 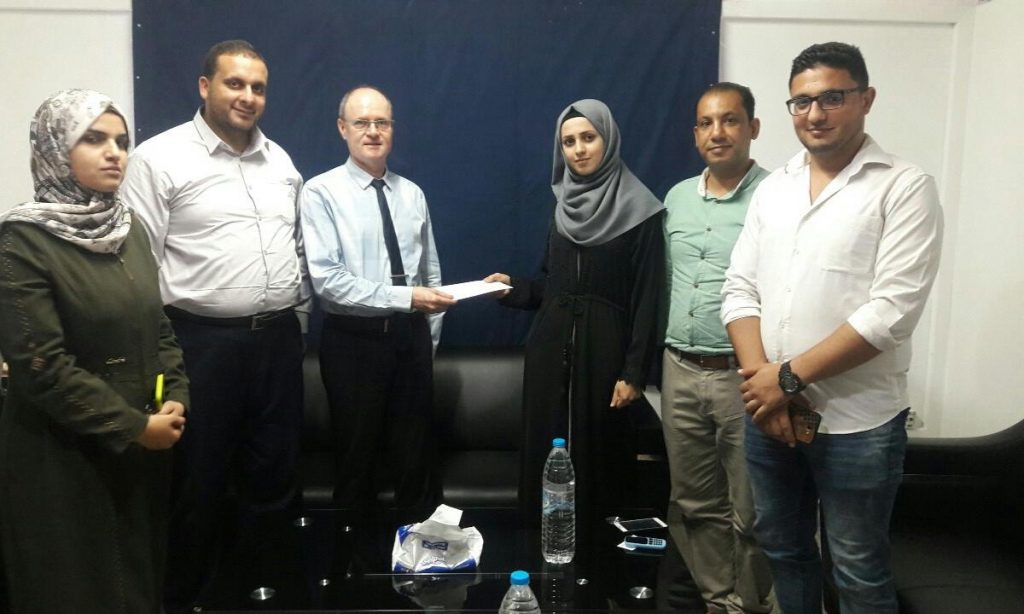 On Monday, young Palestinian activists handed a message to UN representative, Gernot Sauer, at the launch of a social media campaign to raise awareness about the Israeli siege of  the Gaza Strip. (Photo: Middle East Monitor)

Over 53% of Palestinians in Gaza are unemployed due to the hermetic sealing of the area. Poverty and unemployment has worsened due to 18-hour power-cuts ordered by Israel. Ninety percent of the water is undrinkable, and much of Gaza’s infrastructure has been destroyed due to Israeli bombardment. Reconstruction has ground to a halt because of Israeli restrictions on cement and construction materials. Gaza’s hospitals suffer a severe shortage of medicine and lack of fuel for emergency power generators. Israel has also denied patients with chronic and serious diseases permission to access treatment outside Gaza.

“We are not seeking luxuries. Palestinians simply want a decent life: milk for our children, water fit for human use, enough electricity, medicine for patients, free movement, construction materials to rebuild our homes — and, most importantly, dignity and freedom,” explained Shubeir.

At the campaign launch on Monday, young activists handed a message to UN representative, Gernot Sauer. Sauer assured them that he would pass the message on to the UN General Assembly, and hailed the creative youth campaign to raise global awareness of the dire humanitarian situation. The UN has predicted that Gaza would be unliveable in 2 years if the siege is not lifted.

The campaign comes at a time when aid to Palestinians has been slashed by United States presidentDonald Trump, and the peace process is being destroyed by Israel with the assistance of the Trump administration.