Syria or Southeast Asia: The West Lied, Lies, and Always Will

I’m sitting at the splendid building of the Singapore National Library, in a semi-dark room, microfilm inserted into a high-tech machine. I’m watching and then filming and photographing several old Malaysian newspapers dating back from October 1965.

These reports were published right after the horrible 1965 military coup in Indonesia, which basically overthrew the progressive President Sukarno and liquidated then the third largest Communist party on Earth, PKI (Partai Komunis Indonesia). More than one million Indonesian people lost their lives in some of the most horrifying massacres of the 20th century. From a socialist (and soon to be Communist) country, Indonesia descended into the present pits of turbo-capitalism, as well as religious and extreme right-wing gaga.

The United States, United Kingdom, Australia, Holland and several other Western nations, directly sponsored the coup, while directing both the pro-Western treasonous factions in the military, as well as the religious leaders who stood, from the start, at the forefront of the genocide.

All this information is, of course, widely available in the de-classified archives of both the CIA and U.S. State Department. It can be accessed, analyzed and reproduced. I personally made a film about the events, and so have several other directors.

But it isn’t part of the memory of humanity. In Southeast Asia, it is known only to a handful of intellectuals.

In Malaysia, Singapore or Thailand, the Indonesian post-1965 fascism is a taboo topic. It is simply not discussed. “Progressive” intellectuals here are, like in all other ‘client’ states of the West, paid to be preoccupied with their sex orientation, with gender issues and personal ‘freedoms’, but definitely not with the essential matters (Western imperialism, neo-colonialism, the savage and grotesque forms of capitalism, the plunder of local natural resources and environment, as well as disinformation, plus the forcefully injected ignorance that is accompanied by mass amnesia) that have been shaping so extremely and so negatively this part of the world. 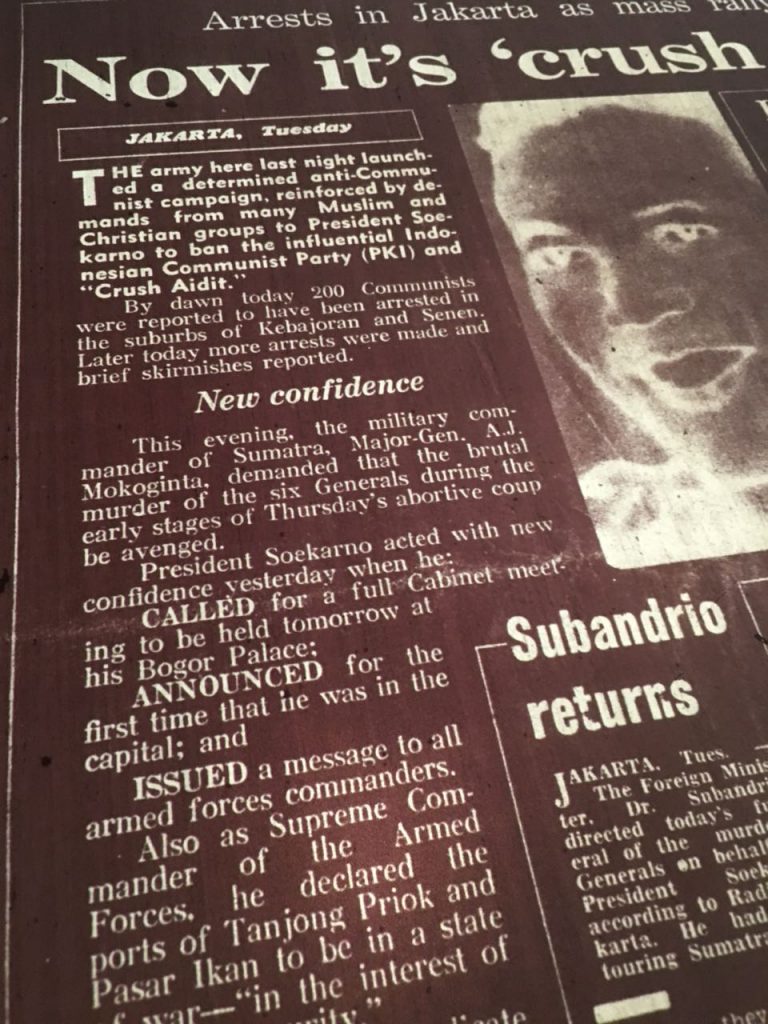 In Indonesia itself, the Communist Party is banned and the general public sees it as a culprit, not as a victim.

Lies are obviously paying off.

No other part of the world has suffered from Western imperialism as much after WWII, as Southeast Asia did, perhaps with two exceptions, those of Africa and the Middle East.

In so-called Indochina, the West murdered close to ten million people, during the indiscriminate bombing campaigns and other forms of terror – in Vietnam, Cambodia and Laos. The abovementioned Indonesian coup took at least 1 million human lives. 30% of the population of East Timor was exterminated by the Indonesian occupation, which was fully supported by the West. The Thai regime, fully subservient to the West, killed indiscriminately its leftists in the north and in the capital. The entire region has been suffering from extreme religious implants, sponsored by the West itself, and by its allies from the Gulf.

But the West is admired here, with an almost religious zeal.

The U.S., British and French press agencies and ‘cultural centers’ are spreading disinformation through local media outlets owned by subservient ‘elites’. Local ‘education’ has been devotedly shaped by Western didactic concepts. In places like Malaysia, Indonesia, but also Thailand, the greatest achievement is to graduate from university in one of the countries that used to colonize this part of the world.

War Propaganda and the Fundamentalism of Western Media Control

Victim countries, instead of seeking compensation in courts, are actually admiring and plagiarizing the West, while pursuing, even begging for funding from their past and present tormentors.

The same day, I turned on the television set in my hotel room, and watched the Western coverage of the situation in Idlib, the last stronghold of the Western-sponsored terrorists on Syrian territory.

Russia has called for an emergency UN Security Council meeting warning that the terrorists might stage a chemical attack, and then blame it, together with the West, on the forces of President Bashar al-Assad.

NATO battleships have been deployed to the region. There can be no doubt – it has been a ‘good old’ European/North American scenario at work, once again: ‘We hit you, kill your people, and then bomb you as a punishment’.

Imperialist gangsters then point accusative fingers at the victims (in this case Syria) and at those who are trying to protect them (Russia, Iran, Hezbollah, China). Just like in a kindergarten, or a primary school; remember? A boy hits someone from behind and then screams, pointing at someone else: “It was him, it was him!” Miraculously, until now, the West has always gotten away with this ‘strategy’, of course, at the cost of billions of victims, on all continents.

For years and decades, we were told that the world is now increasingly inter-connected, that nothing of great importance could happen, without it being immediately spotted and reported by vigilant media lenses, and ‘civil society’.

Yet, thousands of things are happening and no one is noticing.

Just in the last two decades, entire countries have been singled-out by North America and Europe, then half-starved to death through embargos and sanctions, before being finally attacked and broken to pieces: Afghanistan, Iraq, Libya to mention just a few. Governments of several left-wing nations have been overthrown either from outside, or through their own, local, servile elites and media; among them Brazil, Honduras and Paraguay. Countless Western companies and their local cohorts are committing the unbridled plunder of natural resources in such places as Borneo/Kalimantan or the Democratic Republic of Congo (DRC), totally ruining tropical forests while murdering hundreds of species.

Are we, as a planet, really inter-connected? How much do people know about each other, or about what is done to their brothers and sisters on different continents?

I have worked in some 160 countries, and I can testify without the slightest hesitation: ‘Almost nothing’. And: ‘Less and much less!’

The Western empire and its lies, has managed to fragment the world to previously unknown extremes. It is all done ‘in the open’, in full view of the world, which is somehow unable to see and identify the most urgent threats to its survival. Mass media propaganda outlets are serving as vehicles of indoctrination, so do cultural and ‘educational’ institutions of the West or those local ones shaped by the Western concepts. That includes such diverse ‘tools’ as universities, Internet traffic manipulators, censors and self-censored individuals, social media, advertisement agencies and pop culture ‘artists’.

There is a clear pattern to Western colonialist and neo-colonialist barbarity and lies:

‘Indonesian President Sukarno and his closest ally the Communist Party of Indonesia (PKI) were trying to build a progressive and self-sufficient country. Therefore, they had to be stopped, government overthrown, party members massacred, PKI itself banned and the entire country privatized; sold to foreign interests. The overwhelming majority of Indonesians are so brainwashed by the local and Western propaganda that they still blame the Communists for the 1965 coup, no matter what the CIA archives say.’

Mossadegh of Iran was on the same, progressive course. And he ended up the same way as Sukarno. And the whole world was then charmed by the butcher, who was put to power by the West – the Shah and his lavish wife.

Chile in 1973, and thereafter, the same deadly pattern occurred, more evidence of how freedom-loving and democratic the West is.

Patrice Lumumba of Congo nationalized natural resources and tried to feed and educate his great nation. Result? Overthrown, killed. The price: some 8 million people massacred in the last two decades, or maybe many more than that (see my film: Rwanda Gambit). Nobody knows, or everyone pretends that they don’t know.

Syria! The biggest ‘crime’ of this country, at least in the eyes of the West, consisted of trying to provide its citizens with high quality of life, while promoting Pan-Arabism. The results we all know (or do we, really?): hundreds of thousands killed by West-sponsored murderous extremists, millions exiled and millions internally displaced. And the West, naturally, is blaming Syrian President, and is ready to ‘punish him’ if he wins the war.

Irrational? But can global-scale fascism ever be rational?

The lies that are being spread by the West are piling up. They overlap, often contradict one another. But the world public is not trained to search for the truth, anymore. Subconsciously it senses that it is being lied to, but the truth is so horrifying, that the great majority of people prefer to simply take selfies, analyze and parade its sexual orientation, stick earphones into its ears and listen to empty pop music, instead of fighting for the survival of humanity.

I wrote entire books on this topic, including the near 1,000-page : “Exposing Lies Of The Empire”.

This essay is just a series of thoughts that came to my mind, while I was sitting at a projector in a dark room of the Singapore National Library.

A rhetorical question kept materializing: “Can all this be happening?” “Can the West get away with all these crimes it has been committing for centuries, all over the world?”

The answer was clear: ‘But of course, as long as it is not stopped!”

And so, A luta continua!

Andre Vltchek is a philosopher, novelist, filmmaker and investigative journalist. He has covered wars and conflicts in dozens of countries. Three of his latest books are Revolutionary Optimism, Western Nihilism, a revolutionary novel “Aurora” and a bestselling work of political non-fiction: “Exposing Lies Of The Empire”. View his other books here. Watch Rwanda Gambit, his groundbreaking documentary about Rwanda and DRCongo and his film/dialogue with Noam Chomsky “On Western Terrorism”. Vltchek presently resides in East Asia and the Middle East, and continues to work around the world. He can be reached through his website and his Twitter.