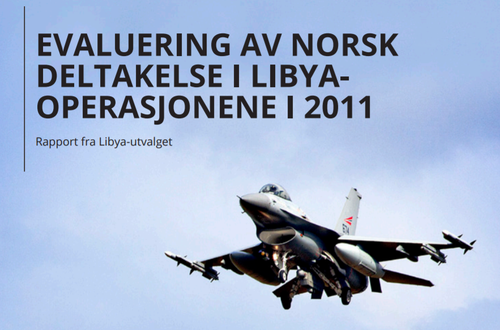 A new official report produced by the Norwegian government illustrates the continuing absurdity of NATO expansion and foreign adventurism in places very far away from the “North Atlantic” explicit in the name North Atlantic Treaty Organization — places like Afghanistan, Libya, Ukraine or Syria.

Top Norwegian officials have now admitted they “had very limited knowledge” of events unfolding in Libya during 2010 and 2011, prior to NATO’s military intervention on behalf of anti-Gaddafi rebels — a war that resulted in regime change and a failed state ruled by competing governments and extremist militias to this day. Norway enthusiastically joined the US, UK, and French led bombing of the country initiated in March 2011 even knowing full well its military knew next to nothing of what was unfolding on the ground.

But what did decision-makers have to go on? Consider this absurd admission from the official report: “In such situations, decision-makers often rely on information from media and other countries,” the report reads.

The commission that produced the report was chaired by former Foreign Minister Jan Petersen, and ultimately concluded that politicians in Oslo dragged the nation into the US-led bombing campaign with no regard for what could come next.

NATO’s name for the operation was the US code name ‘Operation Odyssey Dawn,’ and Norway flew 596 strike missions during the first five months of the NATO intervention, dropping 588 bombs on Libyan targets, according to the report. Norway had provided six F-16 fighter jets and its pilots were reported to have conducted 10 percent of all coalition strikes against pro-Gaddafi forces.

“When you look at what happened next, with Libya becoming a hotspot of terrorism, this is not a decision to be proud of.”

The war had been sold to the European public on “humanitarian” grounds and included sensational atrocity stories, many which were later proven false, painting Libyan leader Muammar Gaddafi as an irrational homicidal maniac.

One notable story explicitly promoted by the State Department as well as US Ambassador to the UN Susan Rice was the Viagra-fueled mass rape story, which claimed that Gaddafi had supposedly supplied his troops with Viagra in order to unleash sexual terrorism on the civilian population. Amnesty International and other human rights investigators later the proved the story completely false.

Some Norwegian politicians now claim the country was hoodwinked into another US-led regime change operation similar to the toppling of Saddam Hussein in 2003. However, considering European leaders had the glaringly obvious example of Iraq and the lies it was built on so recent in history, this appears yet more excuse making designed to evade public responsibility.

Libya has long been forgotten in Western mainstream media, but has come back into headlines as a small civil war has lately erupted within areas under control of the UN-recognized Government of National Accord (GNA) in Tripoli. Since Gaddafi’s overthrow the country has been fought over by three (and at times up to four) competing governments while the streets are ruled by Islamist militias, including in some areas ISIS terrorists.

According to a CNN report last year, open air slave markets have since come into existence as Libya remains largely lawless and as a once stable national infrastructure and economy has crumbled.

All images in this article are from Zero Hedge.