Transcript of the Interview, Part II

In part I of this article we spoke with Mr. Nidal Rahawi about life under Kurdish rule and some of the most recent tragic events that have taken place. In part II we will expand on the topic of education and the imposed Kurdish curriculum in north eastern Syria.

In an article I mentioned in Part I, Romancing Rojava: Rhetoric vs. Reality the educational program being enforced by the Kurdish self-administration in the north eastern region of Syria is explained in great detail and is a must read.

“The educational program of the Kurdish self-administration has played a role in garnering moral and political support, their policies assumed to be inherently and implicitly progressive. But there has been massive resistance to them among Assyrians across Hasakah. Until the assertion of self-administrative authority, the Syrian central government provided the curriculum for both governmental schools and private schools, such as those belonging to Churches in Hasakah. Teaching was in Arabic, with classical Syriac or spoken Assyrian permitted for use up to two hours a week in classes run by churches. Assyrian and Syriac were depicted by the state not as ethno-national languages belonging to a people but as the province of church education.

In 2015, the Kurdish self-administration released a new curriculum fully steeped in their own ideology. They sought to separate each ethnic group under their control (namely Kurds, Armenians, Arabs, and Assyrians) so that each community would learn the new curriculum in their own mother tongue. The subject of Arabic nationalism—previously a source of the retroactive absorption of Assyrian and non-Arab history into an Arab racial narrative—was cancelled, only to be supplanted by another geographically and historically expansive narrative of Kurdish ethno-centrism. An Assyrian source living in Qamishli told us: “We’ve merely been granted the right to learn about Kurdish history, from a Kurdish nationalist perspective, but in our own language.” This demonstrates the irony that Kurds, once subject to chauvinistic Arab nationalist educational curricula, are now acting as the enforcers of a similarly chauvinistic model over Assyrians and others. There is no dispute that all groups in Syria should have the right to be taught in schools in their own language, but this should not come saddled with the imposition of specific political and racial narratives.” 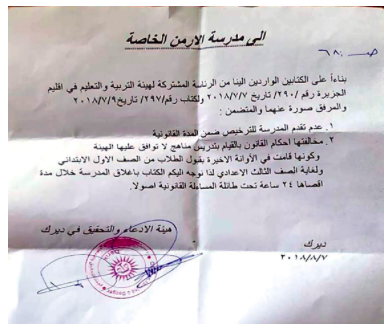 Below is the English translation of the above letter that was sent by the Kurdish self-administration to the Armenian Private schools. An almost identical letter was sent to other private Christian schools in the area as well, such as the Syriac Orthodox school.

To the Private Armenian School
Based on the two letters that came to us from the Joint Presidency of the Education Commission, Al-Jazira Region, No. 290 dated 7/7/2018, and the letter No. 297 dated 9/7/2018 with attached copy and includes :

1 – Lack of progress by the school for licensing within the legal period
2 – Violating the provisions of the law by teaching curricula that are not approved by the Commission and the fact that they have recently agreed to accept students from the first grade up to the third grade preparatory, therefore the letter is directed to close the school within a maximum period of 24 hours under the responsibility of legal accountability appropriately.

This news report gives a well summarized overview of what took place during the demonstration on August 28th due to the latest school closures.

Here are two videos that were sent exclusively to me by one of the protesters that took part in the demonstration on August 28th, to re-open the schools that were closed by the Kurdish militias.

As was mentioned in the Romancing Rojava Rhetoric vs. Reality article, “For the PYD, enforcing a new curriculum is part of a long-term process of entrenching themselves over a dominant demographic: this process is subject to contingencies and externalities, such as negotiations over their international legitimacy and how much they are recognized and supported internally by the Syrian state. But it is tasked with a clear political goal and backed by the YPG. For Assyrians, this is a process they are forced to partake in with no clear long-term benefit.”

In an article published by the Assyrian International News Agency AINA the split in opionion between the Kurds and non-Kurds in the area is highlighted, the article states “In the Church of the Virgin Mary in Qamishli, Father Saliba Abdallah says he is sceptical about the Kurdish education system. “Who recognises this curriculum internationally? Is there a state that actually recognises the reality of this region?” asks Abdallah. While Syria’s state diplomas are accredited and recognised elsewhere, Kurdish degrees likely wouldn’t be. “The legitimacy of our schools comes from the legitimacy of the government of the Syrian Arab Republic,” Abdallah says.”

In speaking with the locals it appears that the patience they have exhibited for the past three years has been exhausted and if need be they will take matters into their own hands. Whether it be demonstrations or other means they are worried that if they do not stand up to the changes being made by the Kurdish self administrations under compulsion that future generations will pay the price.

Sarah Abed is an independent journalist and political commentator. Focused on exposing the lies and propaganda in mainstream media news, as it relates to domestic and foreign policy with an emphasis on the Middle East. Contributes to various radio shows, news publications, and forums. For media inquiries please email sarah@sarahabed.com. Her articles can also be seen at The Rabbit Hole. She is a frequent contributor to Global Research

Featured image is from the Mr. Rahawi via the author.